The Simpsons Vs South Park – A cinematic showdown (Review) 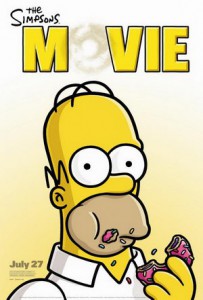 I think breaking point for me came when I recently felt strongly enough about a new episode that I rang a friend to tell him that the new Simpsons episode was actually very good. That’s depressing when you think about it, especially considering that I’ve been watching it (and loving it) since Day 1. It’s been maybe 10 years since I could make that call and mean it.

So after nearly 20 years they decide to announce a movie at last, or realistically 10 years after at last. Once it finally did arrive though the film was pretty good, better than I expected early on… but as I will point out again and again momentum just couldn’t last.

Thanks to Homer (of course) Springfield has become the most polluted city in America, in an update on Escape from New York it is “domed off” with a giant glass object from which there is apparently no escape. The inhabitants of Springfield are, as the creator of the dome puts it, trapped like carrots.

It is the events leading up to the doming and subsequent escape that showed the most promise. All of the show regulars were shown but many seemed underutilised (Burns and Smithers get maybe 1 minute total). There are some quality jokes to be had, mostly due to Homer’s lack of parenting skills and people getting hurt. There is also some full Bartal nudity.

The guest star (if you can have one in a film, and I’m saying you CAN!) is Russ Cargill, the boss of the Environmental Protection Agency who places the dome to protect the Earth. He is voiced by Albert Brooks (Marlin himself!) and he gets most of the best lines in the movie, including the “trapped like carrots” one mentioned earlier.

Unfortunately though what ensues is strongly reminiscent of the show’s lifespan so far;

35 minutes. Simpson family escapes the dome, Cargill orders around the clock surveillance, has a soft/tuff guy rant and admits to being drunk with power. It is a brilliant 30 seconds, unfortunately nothing after it comes close to being as good.

The Simpsons are pariahs in their own town and flee to Alaska, only once happily ensconsed in Palin’s backyard they find out that Cargill has started to doubt his own dome and has a far more severe and permanent Plan B in mind for Springfield.

Marge and the kids set off to save the day while Homer searches for a deeper truth… which he finds when he meets a lady with giant boobs. Aren’t they always the answer.

In truth Giant boob-lady is just gimmicky and tacky, the Lisa’s new admirer bit was a waste of time aside from giving her a few minutes screen time and Marge has little to do in the film aside from doubt her marriage.

The first half was actually pretty great even if the only thing the dopey and impressionable remember is Spiderpig. If you watched the second half in isolation as two 20 minute episodes you would go away very unimpressed.

I still love The Simpsons, but boosting the first half of a film is a little like cheering when your sports team loses narrowly to a better opponent. An honourable defeat, but a defeat nonetheless. Despite that even though this is by no means classic it has enough good jokes and even sub-par Simpsons is still funny.

Final Rating – 7.5 / 10. All the bagging and a 7.5? As I said, average Simpsons is still pretty good. If you like The Simpsons: You will laugh. You will very likely enjoy this. (It just isn’t a patch on Season 3 through say 8.) 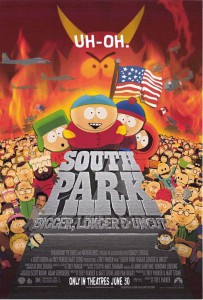 Matt and Trey were smarter with South Park. They made their film version when the show still had a lot of momentum, they also had an opportunity to be a little different in the cinema as even though Stan, Kyle Cartman and muffled Kenny were filthy little buggers they couldn’t get away with most of the swears that these little 8 year old wanted to say. In the movies? No fuckin’ worries.

The average South Park episode is better than the average Simpsons episode, has been for about 6 or 7 years. The problem is that when both at their very best The Simpsons is clearly head and shoulders above, only The Simpsons haven’t been at their best since the mid 90s. For those in their 20s this means there is a real chance that you swear black and blue that Family Guy and South Park kick The Simpson’s yellow arses.

Only at this time I am comparing the movies and letting them battle it out for 80 minute supremacy honours, not which show was better over the decades.

The South Park movie takes all the best SP bits, ludicrous premises, sheer genius stupidity, quality musical bits and smart and insightful messages delivered in a profane way by crude cardboard cutouts. Only South Park could take all this shit and have it even vaguely make sense.

They also pull the piss out of a lot of celebrities (not always the easy targets too) and have the best “post-scene” throw in jokes of any animated show, sometimes the joke has gone and you’re wondering if you just heard what you think you did.

This is a seriously short movie but it manages to cram an awful lot in.

(Assuming you know) the boys are going to see the new Terrance and Phillip movie, the romantic comedy (probably) “Asses of Fire”. Inspired by the flatulent antics and potty talk they head back to home and school and tell everyone all about it, in no uncertain terms.

After a brief brainwash where the profane tendencies are exorcised from their little cardboard bodies they promptly head back to the cinema for another look, afterwards Kenny is inspired by one of the stupid acts and accidentally lights himself on fire. As you can’t live with a baked potato in place of your heart the operation to save Kenny fails and he is sent to hell.

Everyone else is grounded, and Cartman gets a chip implanted in his head that emits and electrical shock if he swears.

Due to their role in the death Terrance and Phillip are arrested due to the shrill barkings of Kyle’s Mum and many other do-gooders, America goes to war on Canada (where T&P are from) after the Baldwins are bombed and T&P are scheduled for a very public execution during a big army show emceed by Big Gay Al.

Meanwhile in Hell… Kenny meets Satan, who is shacked up with the recently killed Saddam Hussein (who wasn’t actually dead when the film was made), they announce that the spilling of innocent Canadian blood will allow Satan’s rise to Earth, where he can turn it into another level of Hell. Nice.

Kenny’s ghost comes back to warn the boys, who in a moment of clarity realise they must stop the execution. Fortunately the war, Satan’s rise and the big show where Terrance and Phillip are to be killed all happen in South Park. Lucky!

There are a myriad sub-plots and everything wraps up nice and neat, there aren’t really many high points but some of the many songs are extremely good, especially “Uncle Fucker” and “Kyle’s Mum is a bitch”. (What did you expect?)

Kenny finally took his hood off which I remember was a big deal apparently at the time, and the boys got to unleash every version and arrangement of the f-word ever thought of.

Final Rating – 8 / 10. Like South Park the TV show over the years. Consistent, full of laughs and good jokes with unlikely situations that somehow make sense. Just lacking that spark of inspiration to push it to greatness.

All in all. If I had to compare the two purely by the films South Park gets the nod because of the consistency and creativity. The Simpsons Movie started very well but ended up limping to the finish line.

So the South Park movie wins. (But The Simpsons is the better TV show thanks to the early years. The latter years have been stricken from the record. That’s why we have DVD you know.)