Get him to the Greek (Review) 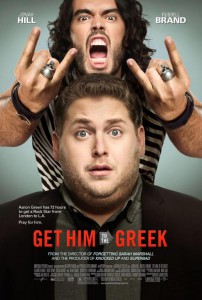 It took a while but I eventually got around to watching this. (Thanks Hoyts discount offer!)

Russell Brand was hardly the best thing about Forgetting Sarah Marshall a couple years ago, that film is a little underrated and had several memorable scenes and roles, not least of which was (surprisingly) Paul Rudd.

But Rusty was the guy though that did the most with his sudden emergence, since that time he has been a staple on the late night talk shows, continued releasing his stand up comedy DVDs despite the fact that they have no jokes and basically consist of him telling stories with his humerous cadence and patois, and managed to nab the music “It-Girl” of the moment Katy Perry. (Oh and Russell, as far as having a unique way of speaking, that worked for Pauly Shore. For a while.)

Coupled with the fact that I believe Russell Brand to be quite a smart bloke (apart from the Katy Perry thing) and I hope he makes the most of his 15 minutes because he can be quite funny and often inspired to laugh inducing rambling rants, (my favourite type of rants by the way).

So rather than come up with a new vehicle to maximise Brand’s “brand” they smartly stick with what got him there in the first place, the rock star Aldous Snow, lead singer of Infant Sorrow.

In Forgetting Sarah Marshall Aldous Snow was merely the guy who took Peter’s titular missus. During the film Snow sang two songs and showed that he was capable of great rock star excess, but he rarely gave too much direct evidence of how capable.

In Get him to the Greek he gets his shot.

It is a few years on from the Hawaiian soujourn and Snow’s high flying career is abruptly grounded. An ill conceived song and album both titled African Child is universally panned by critics and even his loyal fans, and his longstanding, similarly smutty missus Jackie Q (Rose Byrne) has ditched him, taking their son with her. Aldous has as a result fallen off the teetotalling wagon big time and is hoovering up everything he can push into an orifice.

Snow is left to revel in his own depression with only toadying henchmen and his Mum (with who he has a love/hate relationship) sticking around. For some reason, cinematic convenience perhaps? Snow travels sans entourage for the entire film.

Back in the States a low level music exec Aaron Green (Jonah Hill) is sitting in a  company brainstorming session, he floats the idea of Infant Sorrow reforming to play a 10 year anniversary gig in LA at the famed Greek theatre, the site of Snow’s greatest success. Aaron’s boss the Les Grossman rip-off named Sergio (Diddy… as in Diddy) is unimpressed, but looks into it. Imagine Aaron’s surprise when Sergio returns days later to inform him that Snow has agreed to the gig, and that Aaron is to almost immediately set off to chaperone him to America for a promo TV appearance and the concert.

Aaron is a longtime devotee of Infant Sorrow’s and heads home to tell his overworked missus Daphne of his success. Daphne is not a big music lover unfortunately, what with her career as a doctor taking shape and all, and after a brief argument they agree to break up.

So Aaron, simultaneously heartbroken and breathless with anticipation heads off to run his taxi-service. As with all major musical gigs apparently the planning and implementation of the entire proposal can be done in no time… Aaron has three days.

Look I could go through the next hour of the film describing misadventures and hijinks, we all know going in that this would be more “Sex & Drugs & Rock’n’Roll” than “Wine, Women & Song”, and it is, that’s why it is a bit odd that all the goings on left be more bemused than amused.

Sure Aldous gets himself in many a predicament with his spoiled “I do what I want” attitude, and manages to drag Aaron into most proceedings despite his weak protests, but the whole thing is more matter-of-fact than shocking or hilarious.

Missed flights, absinthe, casual groupie encounters and botched interviews all come and go, but the only scene that raised the eyebrows was when Aldous demands that Aaron hide his stash as they go through customs… join the dots from there kids.

Will Snow get to the gig? Will Aaron get back with Daphne? Will Diddy ever be anything less than a self-absorbed prat?

I’d like to say that the whole thing was as I expected and feel pretty smug about myself that this wouldn’t stand up well against the original film. Going in I thought there’d be some debauchery featuring drugs and women and hopefully more Brand than Hill, that all happened, but I did fully expect that this would make me laugh a lot more than it did.

All that and the fact that Diddy just can’t make himself seem memorable, attention grabbing or as cool as he has always seemed to think he is, even when his role is practically written that way.

Final Rating – 7 / 10. Amusing at times, worth a look. Why do I feel strangely empty? Definitely a film I will revisit on DVD to see if I think differently next time round.