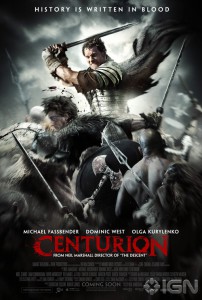 When you want to look like Outlander you’re aiming low.

Every now and then a relative unknown makes a film that shows a great deal of promise and creativity, depending on how good the film is I occasionally make a mental note to hunt down the next film they make and see what they come up with.

A few years back a small horror film called Dog Soldiers got a couple good reviews so I looked it up, it was ok/not great but solid enough to get the internal sticky-note embedded inside my skull. A couple years after that came The Descent, and if you’re reading this website there’s a fair chance you already know about that.

Neil Marshall seemed to have “the goods”.

Then came Doomsday, OK he overstepped the mark but I was willing to give the benefit of the doubt due to the credits in the bank…

Now Centurion, or should I call it The Descent 2?

But there is already a sequel to that film I hear you say, and I acknowledge that. But while The Descent 2 was so faithful it was almost a remake, Centurion too is eerily similar in many respects.

OK so this is set in ancient Rome and not a cave = different, but let’s keep going;

The Descent – 6 people are isolated by circumstances and beset by enemies.

Centurion – 7 people are isolated by circumstances and beset by enemies.

The Descent – While on the run one of the party suffers a graphic broken leg.

The Descent – The leaders of the attackers are vicious and unintelligible.

The Descent – To escape one of the survivors willingly and perhaps unnecessarily sacrifices another.

OK one similarity = fair enough, 2? = pushing it… But 4 key plot details practically the same and it reeks either of a lack of inspiration or laziness. 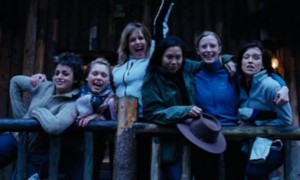 Centurion follows a small band of Roman soldiers isolated from the main army and caught deep in enemy territory. It is very violent but obviously CGI assisted – this is starting to reduce the visceral impact for me when pinkish blood spurts out in blatantly computerised fashion – and features a couple of good original scenes, but there is just too many similarities that remind you of a former – and much, much better – movie. 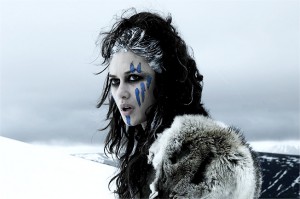 Even if you are ripping yourself off it still is a little dishonest. The use of supposed rebel hottie fighters is excusable except for the fact that they really only get into one stoush, hard to justify just how awesome they are if they take on an enemy in lesser numbers.

There are some sweeping vistas and exciting camerawork that reminded me a lot of the Lord of the Rings in terms of scenery, but the comparisons ended there.

If you want to watch a movie about  a small group attempting to elude vicious assailants rent The Descent, better yet buy it.

If you want to watch the same thing only nowhere near as good you might check this out. Just let it be known that if Neil Marshall lived in the US he might be named Zack Snyder, whether you think that is a good thing or not is up to you.

Final Rating – 6 / 10. Neil Marshall keeps coming up with fanboy-friendly plots and settings, but it seems he left the best of his ideas behind in The Descent. One more chance Mr Marshall.