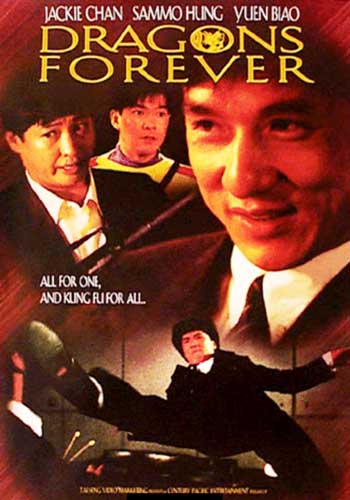 Another one of Jackie’s finest. Jackie is a lawyer and it must be said a bit of a playboy. Sammo is one of his buddies and Yuen Biao is another buddy, although one prone to insanity.

Initially Jackie is defending a client accused of polluting water sources with toxic waste, which is killing the fish in a fish farm owned by the film’s alleged “hotties”. After a while Jackie lets his dick do the talking and goes to bat for the ladeez. Sammo also gets a chance to work his big man magic by putting the word on the more conservative female owner. With not one but two romantical subplots they had to shoe-horn in a cheesy “falling in love” montage, but I’ll forgive them that for the fights.

The first big fight occurs on a boat where Jackie is macking his lady friend. Once the bad guys make their intentions known Jackie must ward off about a dozen assailants, all within the confines of a boat that he can’t escape from. So basically the scene is run away… get cornered… fight… run… punch… delay… fight… repeat until knuckles bleeding and audience salivating.

The finale has Jackie, Yuen and Sammo all heading to the bad guys factory, after some preliminary hijinks, where they have a showdown between them and a cigar chomping bad guy, his numerous henchman and personal attack dog Benny the Jet Urqiduez. The cigar chomper is a cheap shot master, often slipping a sly kick or punch when Jackie is busy warding off other attackers, he also seems just slimy and weasely enough that you wants him to get fucked up.

Yuen Biao gets his chance to exhibit his athletic prowess in taking on several henchman in order to save Sammo, who has been drugged by the bad guys, but as always it is Jackie who must take on the principal threat, and once again the Jackie V Benny stoush is another classic.

(It must also be said that in the DVD version I own Benny has the worst overdub in the history of bad overdubs, even though he gets only 3 words of dialogue. As a postscript this is perhaps the only Jackie DVD that I own with overdubbed dialogue. Normally I don’t mind subtitles at all, but I must say after watching maybe 30 foreign language films in the last few months my eyes welcomed the chance to simply watch a film rather than reading it.)

Dragons Forever is an absolute classic.

The fights in this are as good as anything Jackie ever did bar perhaps Drunken Master 2.

Not really. The feats on show are more about athleticism than death defiance. Some huge falls though in the fights that must have hurt.

On top of the usual action this film has Jackie at his most pimpin’ pimpin’.

Supposedly the two women who own the fish farm are hot. I guess you had to be there.

Final Rating – 9 / 10. If you were trying to showcase Jackie to a newbie, this might be the film to use to ease them in. Easy to watch, hard to fault.

While I try to throw a joke or two into proceedings when I can all of the opinions presented in my reviews are genuine. I don't expect that all will agree with my thoughts at all times nor would it be any fun if you did, so don't be shy in telling me where you think I went wrong... and hopefully if you think I got it right for once. Don't be shy, half the fun is in the conversation after the movie.
View all posts by OGR →
This entry was posted in Film, Great Movies, Jackie Chan, Movie Reviews, OGR Recommends, Superstars, Worthwhile Movies. Bookmark the permalink.