The Spy Next Door (Review) 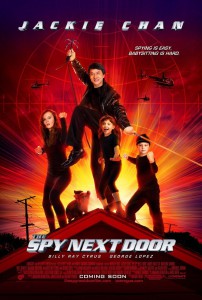 This film is the impetus behind two things, this Jackie Chan movie marathon and the realization that Jackie’s film career is no longer alive and kicking.

The Spy Next Door sucks on so many levels that if Jackie weren’t in it there was no way I would ever have watched it, it is plain to see even from the poster where it is headed, and the sucky trailer only reinforces that.

In fact, this derailed my plan to pit Jackie’s previous two “worst film” nominees, The Medallion and The Tuxedo against each other, rewarding the “winner” with the least sought after title of “film that Jackie Chan would most like erased from existence”.

Unless he stops soon and gracefully drops from the spotlight he may continue creating new nominees each year it seems. Right now it appears that Jackie is getting by on pure name recognition.

The Spy Next Door has Jackie living next door to a single Mum with 3 of the most annoying, smug, smarmy shitbag kids in cinematic history. They have a terrible quip for everything and act like absolute arseholes for the entire film. Even at the end of the film where they supposedly “get it” and come around I still loathed them.

Have I made myself clear? I HATED THESE KIDS!

Now Jackie of course is the spy out to get the bad guy on one last job before he retires. He does that and plans to settle down for good with the next door hottie and her shitbag kids, only the baddie escapes.

Now the kids hate Jackie, thinking he is a nerd who is trying to take the place of their real absentee Dad, and they decide to get rid of him from the picture.

So Jackie wants them to like him so he can be with the hottie and the kids want him out, what could bring them together? The hottie having to leave town for a while to care for her sick Dad, and Jackie volunteering to look after the kids for a few days… that’s what!

That’s it really, if I tell you that Billy Ray-Cyrus is the “comic relief” in the film would that help preventing you from watching this? Please? I guess Hannah Montana pulled some strings to get him  out of the house and stop him from spending her money.

There’s not one point when I laughed, not even a chuckle.

The “action”, if you can call it that involved nothing more than painfully obvious wire-work and stunt doubles.

Jackie is never fully onscreen during the fights, meaning he isn’t the guy doing the movement.

JACKIE CHAN IS ALWAYS ONSCREEN DURING HIS FIGHTS!

Of course at the end everyone loves each other and we can move on with our lives.

I hated the kids.

I hated this film.

I was as comfortable listening to this crap as Jackie was saying it.

My normal checklist doesn’t apply, this film has ZERO redeeming features. It could have Vida Guerra gyrating in her underpants in the background the whole film and I wouldn’t want to watch it again.

And fuck I hated those kids.

Speaking of terrible or at least pointless Jackie Chan flicks, here is a brief list of films that you needn’t chase up, and why.

Winners & Sinners – A Jackie favour to Sammo Hung (who directed), Sammo and four buddies get out of prison and make a pact… and I lose interest from there.

Jackie is in it for maybe 15 minutes total, and 10 of those are in one scene with a rollerskating scene where it is obvious he is not actually doing the more difficult moves. Jackie isn’t even in the final fight.

If you MUST watch it though (and you mustn’t) special mention goes to the ugliest midget robber in history.

Winner and Sinners 2 – The original made some bucks for some reason, so here is the sequel!

Again Jackie gets even less time, this time Bolo Yeung is also onboard for one scene, and “Sam” from Infernal Affairs gets a role.

Jackie has three fights, 2 in more 6 minute span. None of them are worth watching really. The finale sequence goes down as one of the more surreal and pointless that I can recall.

Island of Fire – Jackie is simply one of a cast of many in another Sammo film. The plot makes no sense, there is some violence but precious little martial arts and again Jackie gets a couple of average fights.

The plot basically makes no sense, but Sammo did manage to shoehorn a memorable wet T shirt scene in half way through the film for no reason aside from big wet dripping yams.

Anything prior to Dragon Lord – I’ve seen them all. Sorry Jackie, you have to start somewhere, let’s just call all of these early efforts training and forget about them.

Jackie is still a breathtaking athlete even in his early years, but at this stage the fights are still all punch-stop-kick-stop-turn-wait-punch stuff.

These early efforts are more curios than solid additions to a CV.

While I try to throw a joke or two into proceedings when I can all of the opinions presented in my reviews are genuine. I don't expect that all will agree with my thoughts at all times nor would it be any fun if you did, so don't be shy in telling me where you think I went wrong... and hopefully if you think I got it right for once. Don't be shy, half the fun is in the conversation after the movie.
View all posts by OGR →
This entry was posted in Crappy Movies, Film, Jackie Chan, Movie Reviews, Superstars, The 7th Level of Suck. Bookmark the permalink.