The Medallion Vs The Tuxedo (Review) 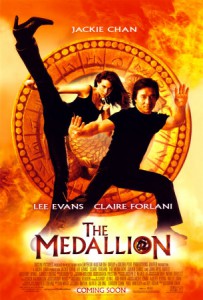 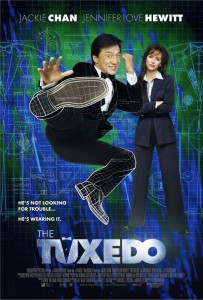 Battle of the crap.

In the early part of the dubbos Hollywood couldn’t work out how to harness Jackie’s physical talents without trying to justify it in some stupid pointless way… Isn’t it enough that the guy can throw himself around like a rag-doll, perform breathtaking stunts and put his body though amazing punishment?

By using the “it was magic or technology” plot device it is almost like they are saying “No-one will believe that it is actually him” defense, which should be insulting to Jackie.

Anyway until The Spy Next Door these crapfests were as bad and clichéd as Jackie Chan films got. I watched them both when first released and expunged them from my memory. This exercise is meant to see what was the worst of the worst, the “crème de la crap” as it were.

Then The Spy Next Door was released and won that title. Hands down.

These are still terrible though and dammit if I’m not going to get my way.

The Tuxedo: Taxi driver named Jimmy Tong renowned for his quick driving. He gets offered a job as the chauffer to a well to do guy who turns out to be a spy.

The Medallion: Cop named Eddie Yang, trying to hunt down a bad guy who wants to take a Medallion that will give superpowers and immortality to the bearer.

Tux: He is given a technologically advanced Tuxedo that uses electronic impulses and “movie magic” to allow the wearer to do just about anything. This includes climbing walls, being a martial arts expert, being an expert sniper and even singing and dancing like James Brown.

Medal: He is given a medallion which gives him superhuman powers and immortality, he can fly, leap tall buildings and that’s about it really.

Gift edge – The Medallion. They both suck, but if you’re going to go there, go with magic.

The bad guy is:

Tux: Trying to corner the bottled water market by making all other sources of water have a dehydrating effect on the drinker. He plans to spread the dehydrating substance through little flying mossie-type insects! (I am not joking.) He is smug and hardly noticeable in the film though.

Medal: (Julian Sands) As best I can tell all he wants to do is have immortality and superpowers. He is at least menacing though in a slightly more convincing PG way.

The worst moment happens when:

Tux: Jackie accidentally knocks out James Brown and then subs for him and sings one of his songs, to a very positive response.

Medal: Any time Lee Evans tries to perform physical comedy, which is EVERY moment he is onscreen. Did I mention he is onscreen A LOT!

Worst Moment edge – The Tuxedo. As sacrilegious as it is that Jackie tries to fit into The Godfather of Soul’s shoes, at least the scene runs less than 5 minutes. Lee Evans is in The Medallion for the duration.

The Worst Character in the film is:

Worst Character edge – Who am I kidding? Lee Evans sucks. The Tuxedo wins.

Fight scene edge – The Medallion. They are both crappy, but Jackie is more creative in the Medallion, especially an early chase scene through the streets of Ireland.

Stunts edge – The Medallion. Ditto, basically the action in The Tuxedo sucks.

Piss Joke edge – Tie. There is a piss joke in each film. I wish I was kidding.

Comedy edge – The Tuxedo. The only time I chuckled, and it may well have been through exhaustion as I watched these back to back, was when Jackie’s code line when meeting JLH for the first time was “Nice rack”.

Repeat, I may have been delirious with entertainment withdrawal.

Both movies suck, that should by now be very obvious.

The Tuxedo had a bigger budget, bigger names and a more ludicrous premise, but that premise was actually better used.

The Medallion was thankfully shorter and had better action, although it should be noted that it was still miles below anything offered in Jackie’s prime.

Neither one was amusing, but Lee Evans loses The Tuxedo major points for his misguided efforts. In fact, even though my finely tuned comparison technique actually shows The Medallion as the slight winner, I am willing to scrap the whole system and declare The Tuxedo best of the worst, all thanks to the fact that Lee Evans wasn’t in it!

It’s not much of a prize, the winner really only gets to say “Well at least I am better than The Medallion!”.

And way better than The Spy Next Door unfortunately.

Final Rating : The Tuxedo – 5 / 10. Lighter than light. Rarely funny or even amusing, with sub par wire-assisted “action”. Yet still better than…

Final Rating: The Medallion – 4.5 / 10. What should have been mediocre and forgettable is pushed still further down by the skin crawling “comedy stylings” of Lee Evans.

While I try to throw a joke or two into proceedings when I can all of the opinions presented in my reviews are genuine. I don't expect that all will agree with my thoughts at all times nor would it be any fun if you did, so don't be shy in telling me where you think I went wrong... and hopefully if you think I got it right for once. Don't be shy, half the fun is in the conversation after the movie.
View all posts by OGR →
This entry was posted in Crappy Movies, Film, Jackie Chan, Movie Marathons, Movie Reviews, Superstars. Bookmark the permalink.