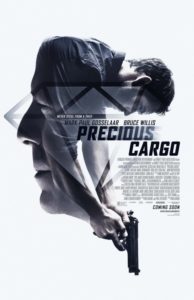 I watched this only for Bruce Willis.

Bruce is Marcellus Wallace now. An older gentleman who directs others, remaining removed from the hurly burly. In this dire effort Bruce is Eddie, a crime boss keeping a couple wet behind the ears idiots on the run.

And what idiots. The ‘lead’ is Jack (Mark-Paul Gosselaar), a man who looks like the offspring of Chris Pine and Chris Pratt, only they didn’t look after their baby. But Jack doesn’t get off scot-free, he must juggle two equally annoying women, a young super-cool sniper who almost always seems to be in the right place at the right time, even when jobs go horribly wrong, and Karen (Claire Forlani) another super-cool criminal with whom Jack shares a past. In fact as Karen informs him, their past is the reason for her swollen tummy.

See Karen stole from Eddie and then asks Jack for help in getting away with it, even as Eddie sends wave after wave of inept faceless minions at them.

Given our crew see fit to plan the big job on a well lit pool table in a crowded bar (“hey everyone don’t look over here”), it should be no surprise that the film’s big Surprise demands idiocy from people on both sides of the screen. But it gets even worse.

There are so many shootouts at close range where no one gets shot, nor does anything seem to end up damaged by the stray bullets. In between these lamentable sequences are even more depressing moments, where the characters trade deep and meaningful advice about the meaning of leading a moronic life.

Gosselaar is instantly forgettable, an amalgam of several other action wannabe nobodies. He at least belongs in D grade crap. Forlani doesn’t belong here, being horribly miscast as a sultry, quick witted ingenue despite being neither of those things. Every time she spits out a pithy line mid battle I cringed.

Almost as much as I cringed every time Bruce reappeared, and I was forced to admit that it might be time for Bruce to let it go. When Hollywood stops calling you, don’t demean yourself by stalking it.

There must be a fork in every former Star’s life. When Hollywood starts giving the prime action roles to the Statham’s and Diesel’s, do you fade away gracefully, take smaller character roles try to forge a serious career, try to build your own franchises, or just take any crap that dribbles your way?

Almost no one steps away cold turkey – fame must be a serious drug. Former giants like Robert De Niro and Gene Hackman tried to go into comedy, with disastrous results. Stallone simply goes back to the Rocky or Rambo well or builds another franchise in the Expendables. (Strangely enough he seems to have done best among his peers.) which leaves Arnie, Jackie, Nicolas Cage… and Bruce Willis.

Arnie is soldiering along, a shadow of his former self, but still seemingly with enough pull to grab slightly better scripts. Jackie Chan is still around cherry picking Asian films with the occasional English effort, with middling outcomes usually elevates by his still sharp sense of (geri)action choreography.

Now Bruce seems in danger of ending the Cage zone, where he just says YES to everything offered. Cage owns this zone. He has built it and loves it, having been there for the bulk of this millennium. But Bruce was in Die Hard. He was in The Sixth Sense. Pulp Fiction. The Last Boy Scout. A bunch of others. The Fifth Element. I could go on.

A quick glance at IMDb for the last few years is damning. Seven films credited with only one I have seen, that being the awful Sin City sequel. Five of the other six seem pre-doomed to suck. The other is Precious Cargo…

Final Rating – 5 / 10. Not all time awful, but certainly sad enough to clearly illustrate the lack of effort onscreen and the lack of inspiration off.