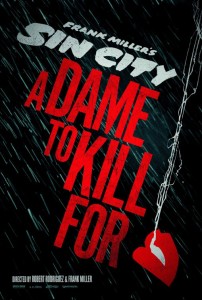 Ten years can do a lot to a city. Where some find new life through immigration, industry or gentrification, if something run down and broken isn’t eventually addressed, it becomes a depressing eyesore. Similarly a decade of not looking after yourself damages the mind, body and soul. Debauchery and merriment are fine in small doses, but debilitating over long periods. Such is the case with Sin City: A Dame to Kill For.

Nancy (Jessica Alba) is now drinking before, during and after her stripping, lamenting the lost Hartigan (Bruce Willis) who now only appears (seemingly under contractual obligation) in flashback form. Marv (Mickey Rourke) still looms large in the bars and back alleys, but where violence once imposed upon him, now he is so bored with himself that he hovers about looking for someone, anyone, to fight. Dwight (now Josh Brolin) now lacks the rakish quality that made him the handsome saviour of the needy, he now sneaks about trying to take incriminating photos in a city so full of crime that such actions seem redundant, and pining for a lost love.

Which brings me to Eva Green, the titular ‘Dame’. Much was said about the poster showing her naked silhouette, claiming it sensationalist and crude, but to be fair to Ms Green and Rodriguez it would be hard to find a scene in the film where she is fully clothed. Her costume department must have been as sparse as Cher’s during the film clip on the naval ship, and her every appearance has more of her out than in.

Is any of this sexy? Well actually yes, Eva Green is one sexy dame and most guys would relish the opportunity to see what she feels comfortable bringing out – if they hadn’t already had the chance in 300: Rise of an Empire, in 3D no less… Regrettably for the film though she is the only character who actually makes things happen, continually appearing in outfits missing crucial buttons to impel the story to the next improbable development. Imagine what she might achieve with a nice summer dress and some sensible shoes!

Where the first film was a fury of interlinked plotlines, Sin City: A Dame to Kill for might be more aptly described as ‘Eva Green maka da guys go crazy’. The remaining cast members are all reactive, male and female, standing about while things happen around them until they have no option but to do something, and even then they seem annoyed to be called upon. She might be a Dame to Kill For, but it’s a flimsy premise to build a film around.

The second suplot started promisingly but left me cold, managing to find the perfect role for Joseph Gordon Levitt to retrospectively decline. He never looks comfortable in the Sin City world, Levitt is too suave and not nearly dangerous or unpredictable enough for this scuzzy world. He is a smooth cat in a world full of edges. The round peg that easily fits in the square hole but is obviously not right for the space. Sure he gets to be a card shark and perform a couple magic tricks, but like sunscreen and a fishing tackle shop, he clearly doesn’t belong in this world.

When Sin City arrived nearly a decade ago it was fiercely original and visually astonishing. Set in a lair for the depraved and opportunistic, where the cartoonish characters can – and were – ripe for slaughter, often in inventive and nasty ways, meant anything and everything was possible.

The girls were sexy and tough – so it was OK if they flashed some skin. The guys aggressive and principled, despite obviously not adhering to the same beliefs as you and I – so it was OK when they killed other bad guys in creative and bloody ways.

Robert Rodriguez and Frank Miller seemed to have built a world that would allow them to bypass the usual social niceties and PC roadblocks that stymie so many promising films. Sin City was a blank cheque for R rated indulgence. They could delve time and again into this edgy world, examining the seedy underbelly of the town social nicety forgot.

Sin City could churn out editions Saw-style for years, with Hollywood’s elite lining up for their cameo. Alas it all ends here, A Dame to Kill For abruptly retracts their funding.

Sin City was once edgy and dangerous, now it is just a sad run down hole full of thugs, sluts and drunks.

Final Rating – 5.5 / 10. With this and Machete Kills it appears that Mr Rodriguez is hell bent on a mission to kill off all of his possible franchises. What was once effortless now looks like he’s trying too hard, with depressing results.