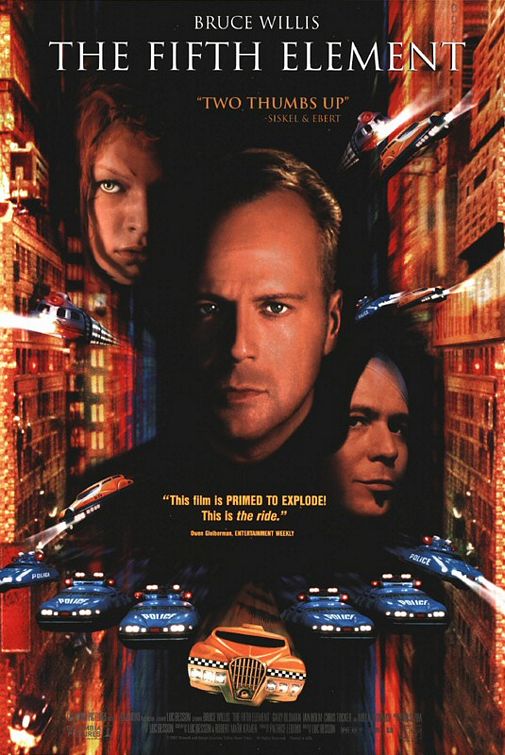 Perhaps the least effective visual in the film is this poster.

When a gargantuan space ball of pure evil is 48 hours away from eradicating the Earth and all who dwell upon it, there is only one way to stop it is by finding a being that is pure goodness. Not diluted 14% like Tom Cruise, not 25% pure like orange juice, not even 78% like Taylor Swift.

The only problem is that only a couple know that the orange haired, wide eyed, band-aid wearing gibberish speaker is the sought after pure being – and initially the space cab driver Major Korben Dallas (Bruce Willis) whose cab she crash landed into in this futuristic future – isn’t one of them. 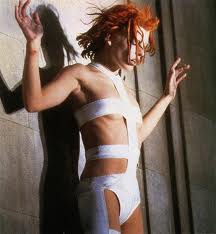 The problem here is tan lines.

Once it becomes evident though that the aforementioned gibberish speaking being Leeloo (Milla Jovovich) is the titular 5th Element everyone wants to get their hands on her.

On the side of good is Priest Cornelius (Ian Holm) charged with mentoring and teaching Leeloo the ropes so that she is ready when the alient force arrive to escort her to safety, unfortunately the aliens are killed minutes before they arrive… which doesn’t help. 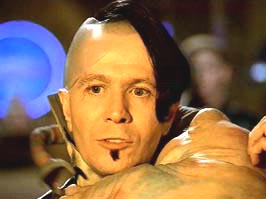 On the bad side is Zorg (Gary Oldman), a big business CEO whose business develops and sells weapons, often to other naughty guys. Zorg is concerned that if good succeeds in wiping out evil his business might suffer, (which makes sense if you think about it).

The action moves to a Hawaii themed holiday ship in deep space, where a handover of special stones representing the other 4 elements is due to take place.

Everyone wants to get their hands on the stones and Leeloo, and Dallas is stuck in the middle of it all.

All the while Leeloo – who was only “born” hours previously when regenerated from damaged tissue – is learning at an incredible rate about humanity and what she has inadvertantly got herself into.

Everyone jostles for position and plans their attacks before the finale turns into a Bruce Willis special bullet-space-opera – only with odd looking monsters instead of terrorists of cowboys.

Every movie nowadays is marketed either as “Nothing you’ve ever seen before” or “Exactly like almost everything you’ve seen before”. Generally only the latter is accurate, only in most cases it should say the same… only worse.

So while The Fifth Element is indeed just another sci-fi flick with big names and shootouts on alien worlds, it is perhaps the most original looking big budget film for a long while.

The future New York (I think) looks especially cool, as we all expect traffic in the future is airborne and cruises around on multiple levels. Space is at a premium and the layout of Dallas’ apartment is especially well appointed and designed.

In fact we are not merely told things are futuristic we are shown, everything onscreen looks similar but quite different to the versions currently available, the fashion is pretty insane but oddly practical and the backdrops and sets bright and colourful. 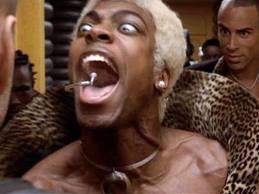 Ruby Rhod in a quieter moment.

Aside from the headline names the cast is filled with non-actors, models and pretty people mainly, and weed-loving musical headcase Tricky has a small role as Zorg’s main henchman.

Chris Tucker steals the second half of the film as chipmunk voiced radio DJ Ruby Rhod, a hyperactive, superficial vacuous motormouth who rocks ridiculous outfits and hairstyles and will not shut up from the moment his show starts to well after it ends. He is followed by toadying Yes-Men and for some reason is universally adored.

None of this should work, and even if some did there is no way it should result in a great film – everything is just too different, too off-kilter, too Non-Hollywood to be successful.

This film is more out there and ambitious than any big budget film I can remember, but somehow it all works.

The first half is merely eye catching and amusing and basically ends with one and all arriving on the space resort ship.

The second half starts with the introduction of Ruby and builds gradually until a concert performance by a giant blue alien creature. Now the performance is opera but don’t let that fool you it’s actually quite cool and really effective, and allows pause for breath before Dallas goes bang-bang, leading to an effective final 20 minutes as things start moving even more rapidly and the huge ball of evil looms ever closer. 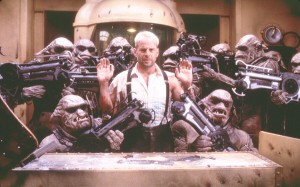 The Fifth Element doesn’t get the credit that it deserves today, I’m not sure why but can only assume that it is viewed as a non-American made kiddie space film. And while Luc Besson, Bruce Willis and co don’t take anything too seriously here The Fifth Element is an enormously entertaining, amazingly eye-catching and truly original flick that holds up even 15 odd years since it’s release.

Final Rating – 9 / 10. Jovovich is good, Oldman suitably hammy and Willis wink-winks it up, but the triumph of The Fifth Element is the audacity of the visuals and effectiveness of the set pieces. This is a movie unlike anything you’ve seen, for once that isn’t a bad thing.

2 Responses to The Fifth Element (Review)