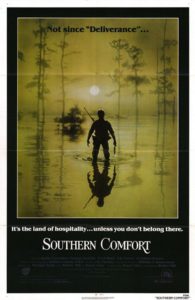 The Louisiana home guard head into the swamps for a march in full kit through rough and uncharted terrain.

A quick short cut to save time sees the nine men run afoul of a small settlement of Cajun trappers. While the initial incident is deeply unfortunate and borne of a moment of soldier idiocy, the events that further escalate the situation are even more unforgivable.

With no map, only a few bullets and no home ground advantage, the odds are somehow against these semi-trained soldiers, who continue to do themselves no favours. At times it seems as if the soldiers are taking turns at doing dumb, inflammatory shit.

With the pressure increasing the tension rises and infighting begins.  Similarly damaging is the lack of a central figure within the troops, though Fred Ward, Keith Carradine and Powers Boothe all take their shots.

The film shows traces of becoming first a Deliverance style drama and then a First Blood type action piece, but like the soldiers lacks the discipline and the ability. The tacked on finale only seems to provide the formerly faceless bad guys with some minor screen time.