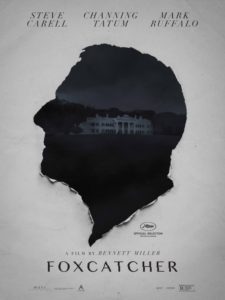 Telling the bizarre but apparently extremely accurate story of the extremely wealthy and even more eccentric millionaire John DuPont (Steve Carrell) and his passion for the sport of wrestling that lead him to try to effectively ‘buy control’ of the US Olympic wrestling program, Foxcatcher is an effective but ultimately frustrating film. At least for me…

DuPont sensibly decides that the best way to convince the US wrestling program of his bona fides is to attract the best wrestling talent to his ‘stable’, which is conveniently held on his spacious and especially well appointed ‘Foxcatcher’ estate that he shares with his sceptical mother, the one person it seems DuPont desperately wants to impress most of all.

DuPont secures the services of many wrestlers, but the one most central to his hopes is Mark Schulz (Channing Tatum), already an Olympic gold medallist and someone DuPont believes will take the Foxcatcher program to further glory at the 1988 Seoul olympics, if only he could bring his older brother Dave (Mark Ruffalo) with him.

It is the difficult nature of the ongoing relationship between these three that underpins the film, with the wildly differing personality types contrasting and generating tension and friction, mostly due to the unpredictability of DuPont.

Tatum and Ruffalo are very believable as a pair of self driven athletes in a niche and often misunderstood sport, but this is a film about DuPont, and Steve Carrell inhabits this extremely intense and intimidating man effortlessly, giving a troubling portrait of a man who refuses to merely inhale their ability and achievements vicariously.

At times – many times actually – you might wonder just how likely some of the developments and antics might seem. Then you remember that this was all apparently very real, and according to what I have read, also very accurately depicted.

But technical and acting achievements do not instantly make a transcendent film. Chalk this down as another excellent character driven film about real life events, but also as a film that works better as an awards attractant than as an entertainment generator.

I don’t know whether it is an age or even a maturity thing, but I still don’t watch movies to appreciate them, I watch them to enjoy them. At times this was a test of my endurance.

Final Rating – 7 / 10. Some ‘character driven’ tales seek to tell us about people I’d prefer not to know about.