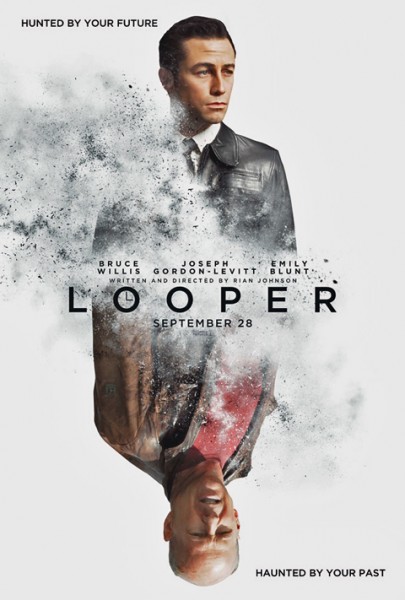 It is the future; 2044 specifically. This is no Blade Runner future with a squillion new inventions and ultra-cool gadgets, if anything the divide between the rich and the poor seems to have narrowed, although unfortunately the overall tilt seems to have moved more towards ‘poor’. There are new inventions but they appear like reasonable enough developments and improvements to those things we have today. In fact aside from the next sentence, the biggest change to society is that around ten percent of the population has modest powers of telekenesis – for most this means trying to pick up chicks by levitating coins and small items.

As a muted narration tells us time travel has been invented but is already outlawed. Only big corporations and the especially connected use it – and in total secrecy – sending captive people back bound, gagged and hooded to specific locations, essentially to be ‘culled’ as they emerge.

The loopers are those charged with performing the ‘finishing touches’ and disposing of the results in the past where no trace will be found.  For carrying out this unpalatable job loopers are well paid in solid silver bars with each kill, and are able lead a privileged existence as a result.

For making himself available and willing to get his hands dirty at certain times and locations as advised by Abe (Jeff Daniels) the chief co-ordinator of the many loopers, Joe’s life is itself somewhat of a plush loop. He has a home the envy of most of the poor and impoverished citizens, and a lifestyle of high class hookers, drugs, parties and an almost ‘above the law’ status, all running in one endless indulgent cycle.

But being a looper doesn’t mean that there is no horizon to your lot. For every looper there comes a time when the payment is made in gold. This represents a severance in many ways, the first being the last job that you will be paid to do, the second meaning is more final. This is because the job is called ‘closing the loop’, and that the looper has just killed his future self.

Not closing the loop is bad, because it leaves loose ends that may put an unwelcome spotlight on time travel – I remind you that it’s illegal folks – and Abe and his men act with extreme efficiency and ruthlessness to keep it from happening, as we see in the first of many great scenes in this film.

One day in the cane fields, Joe comes face to face with his future self, played by Bruce Willis, who for convenience’ sake I will call Joe Sr from here. Shortly thereafter Joe Sr tells Joe Jr that his life to date has been frivolous and wasteful. He tells Jr of a future that he should work towards, a future that Sr will do anything to protect, including one last job in his past (Jr’s present) that will help maintain future order. The job is a little Terminator-ish in nature and involves preventing the rise of a future force known only as The Rainmaker.

Jr on the other hand wants to choose his own future, and realises the only way he can do this is to close off Joe Sr’s existence in his present – ‘You’ve had your life, now let me live out mine’. Joe Jr seeks to stave off Sr’s mission and in doing so protect his future, and in doing so meets a strong single mother named Sara (Emily Blunt) living on the outskirts of the city with her young son Sid.

I will leave the plot there as it would only do the film a disservice and show the threadbare nature of my writing abilities. As the much publicised scene where Joe’s young and old meet in a diner states, the most important point is that for the most part time travel and the limitations and discrepancies can be broken down to one thing; the things Joe Jr does in the present effect Joe Sr and his life.

The plot is excellent and rewards the patient and the observant, the acting is similarly top notch. Joseph Gordon Levitt mimics Bruce Willis’ constant squint, upcurled lip and vocal cadence that at one point when a line came from offscreen I wondered if it was Joe Jr or Sr speaking. Emily Blunt too is a revelation, leading me to break the cinema taboo by checking the mobile IMDB app to see if this woman who looked just like Emily Blunt but spoke like a rough and ready deep voiced American woman was actually the same person. It is and she is extremely good.

And special mention too to Sara’s cinematic son Sid, played by Pierce Gagnon. What could easily have been a cloying, clumsy distraction ended up being a great benefit to the film.

But the best thing about Looper is how it gradually builds. The story is allowed to evolve and breathe, permitting the audience to come to terms with time travel as a central plot device, before ramping up proceedings. And it does, only it never stops.

After the early grin-inducing scene where a (non-Joe) Sr swiftly and graphically come to realise that his Jr is in jeopardy, the film grows ever bigger. By the half way point I began pondering if this was actually a Great film, a couple of scenes later I was wondering if this film was the best I have seen for the year.

Two more awesome scenes, a spectacular development and a masterful conclusion later, and I am wondering if this might be the best pure film released since I kicked this website off in 2009.

Director Rian Johnson announced himself as a storyteller with a unique vision with Brick, a stylish indie film that was far more than the sum of its parts. With an abundance of energy and brilliant ideas carefully and expertly utilised, and a cautious controlling hand Johnson now brings us Looper.

Unfortunately I think the lack of immediate hooks and star power (Levitt is on the up, Willis on the down, neither are AAA list at present) will leave Looper lacking at the box-office, and like so many special films it will find the audience in the next phase of it’s existence.

I might only be one tiny voice, but if you even dabble in sci-fi I use this tiny voice to urge you to see Looper in theatres… and again on Blu-Ray (or whatever you crazy kids do these days) … and again and again like I plan to in years to come.

Final Rating – 9 / 10. Up until about 4 hours ago I would have sworn The Raid was a lock for my Movie of the Year. Now I am not nearly as sure. The Raid might well be the film that is easiest to describe and ‘sell’ to like minded mates, but it is Looper that might in reality be the film that will end up with the staying power.

While I try to throw a joke or two into proceedings when I can all of the opinions presented in my reviews are genuine. I don't expect that all will agree with my thoughts at all times nor would it be any fun if you did, so don't be shy in telling me where you think I went wrong... and hopefully if you think I got it right for once. Don't be shy, half the fun is in the conversation after the movie.
View all posts by OGR →
This entry was posted in Bruce Willis, Film, Great Movies, Movie Reviews, OGR Recommends, Superstars, Worthwhile Movies. Bookmark the permalink.