Darkman was a sincere attempt at crafting an anti-hero comic book style franchise that went horribly wrong from the get go. Consider it Sam Raimi’s training video for Spider-Man… 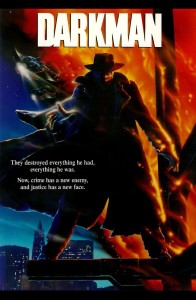 Dr Peyton Westlake (Liam Neeson) is a budding genius scientist on the cusp of creating something that may restore tainted skin cells, with potential cloning benefits to boot. Alas his discovery comes too late, and Westlake is electrocuted – well melted actually – before being dipped in acid and set ablaze for good measure. All because of his prying missus played by Frances MacDormand.

But Westlake doesn’t die. No sir. Although he is unlikely to headline the Hilfiger Christmas catalog, Westlake’s horribly burned skin and deadened sense apparently leave him immune and oblivious to pain. Also he is stronger and more physically capable than ever before. All that and the fact that his emotions arrive in a far purer form now, which is good in happy times, but a little more combustible when things go awry…

With his newfound drive and cutting edge late 80s technology at his fingerprintless fingertips, Westlake starts rebuilding himself and plotting his revenge, though in truth he spends just as much time acting like the Phantom of the Opera and deciding which rags combo that he will wear in the next big scene.

Not that Darkman boasts too much in the way of Big Scenes. It’s all very samey, with Colin Friels doing no one any favours as the Chief Naughty businessman, and MacDormand similarly being badly miscast as the girlfriend constantly in need of saving. Westlake needed a fragile (yet buxom) blonde to swoop in and rescue periodically, MacDormand is simply too capable herself.

All that and even Liam Neeson seems less an avenging superhuman force than an angry lettuce leaf, far, far from the ferocious machine that would appear two decades later in Taken. At this early stage of his career he lacked the physicality, the willingness to look silly and the sense of mischief needed to be the Bruce Campbell type, and the hard edge required to be a convincing hero of any kind.

In fact the film’s one shining light is lead henchmen and doer of evil deeds Robert Durant, a slimy looking guy with no moral compass and proclivity for using a cigar cutter upon digits that would ordinarily be called upon to hold cigars.

His performance and role are the only things that will distract you from the game of ‘spot the Raimi-ism’, as there are so very many techniques, camera angles and calling card for those familiar with either Spider-Man or the Evil Dead trilogy – especially Army of Darkness – to tick off.

Darkman comes across as a passion project made by the wrong guy stymied by Hollywood interference. This film needed an *ahem* darker tone throughout like Blade or The Punisher. It needed better casting and a director who can ignore the cheap laugh. Better yet it would need to be electrocuted, doused in acid and set ablaze.

That would save us from watching it and its two sequels…

Final Rating – 5 / 10. Sam Raimi makes a Sam Raimi film in the wrong genre using the wrong script and the wrong cast. The result is… Not right. 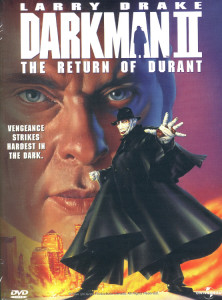 Comedians seem to be the only artists able to tell the same joke over and over, altering it all the while. A line dropped or added here, a new punch line tweaked there. If a musician plays their hit live with the slightest alteration it is met with astonished looks, as if someone painted over the Mona Lisa. If they play a song that sounds the same they are virtually stoned to death (although to be fair Coldplay have been doing it for years and no one seems to mind much).

But if a director insists on making virtually the same movie over and over (Saw aside) the audiences stay away in droves. Why pay money for the same thing again.

In the case of Darkman they tried anyway. But the law of diminishing returns is a harsh mistress, especially when the original set the bar so low. I believe the saying is ‘you can’t polish a turd’. Yet once more we fish into the porcelain bowl dear friends…

Liam Neeson is gone. Ditto Colin Friels and Frances MacDormand. Neeson’s character remains, the fricasseed scientist Westlake, though hosting duties have now been taken over by the mighty Arnold Vosloo, who I could only remember from The Mummy films, another trilogy of similar quality and yet bizarrely far higher profits. A misguided film trilogy turned theme park ride created in the wrong order.

Perhaps guessing that Vosloo would hardly be a household name, the filmmakers turned to the only recognisable face they could think of for those daft enough to deem the first film worthy, that of Durant (Larry Drake), a man so very evil even death could not stop him.

Let’s ignore the fact that he was only an evil henchman before. Durant is the boss now, I mean why bother cutting off people’s fingers with a cigar cutter when you can pay others to do it for you?

Westlake – having seen the first film – is now literally underground, emerging only occasionally with one of his selection of 99 minute faces, and more frequently under cover of darkness as… Well I guess you should know by now. Wreaking justice and whatnot.

The plot is practically the same as the first only much less so. Weapons trafficking is a thing now. As is a potential breakthrough for the 99 minute face reconstruction barrier. Elsewhere the ‘f word’ arrives with a vengeance, but only in a few scenes where I guess Mr. Raimi wasn’t overseeing.

The performances are wooden, the action sequences seldom and unimpressive, and the budget obviously has been slashed as deeply as Westlake’s face.

This time it isn’t just Westlake incapable of feeling emotion. You won’t either.

Unless disappointment is an emotion.

Final Rating – 5 / 10. It’s ironic that Westlake worries that 99 minutes isn’t nearly enough. During these films it feels like eternity. 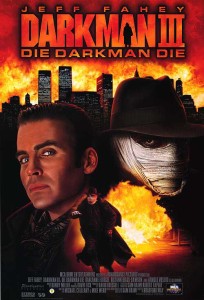 Not even Durant can escape double-death! (That might be a spoiler for the above film.)
Darkman is still dark, and this time he is still Arnold Vosloo, who probably wasn’t flooded with job offers after D2. Darkman is still trying in vain to crack the century. He’s still dull.

He still moonlights as the world’s most wrinkly distributor of occasional vengeance. He still can’t feel feelings. (That could just be because he is a man though.)

Then out of the blue comes a comely female doctor with a possible breakthrough in the reconstructive thing, and an invitation for even more. But didn’t she get the memo that DARKMAN CANT FEEL!?!

No matter, because shortly after he regains feeling he decides he doesn’t much like it anyway. Let me get this straight. First you have feelings. Then you lose them and want them back. Then you get them back and don’t want them? I mean make up your charred little mind Dr. Scabby!

A new bad guy appears as a sleazy, greasy steroid merchant – I suppose guns aren’t dangerous enough to pose a threat anymore, and we get more Straight to DVD action on a late night tv series budget again.

The whole thing is strangely ‘lite’, considering both the title and the series’ obvious aspirations at being Dark Tracy. 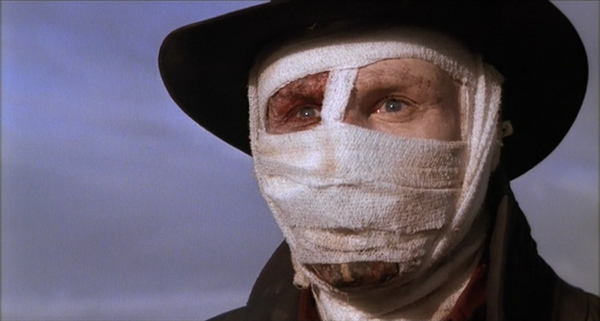 Final Trilogy Rating – 5 / 10. Five odd hours of watching what seems like three versions of the exact same script made by three different hacks (I know Raimi is no hack but that’s not based upon the evidence here). It’s one thing to have a crack and failing at creating a new character, another thing altogether to force me to endure it three tolerance testing times.

In the battle between the blistered; Spawn and Darkman, the are no winners. Unless that is they are being compared to DareDevil…