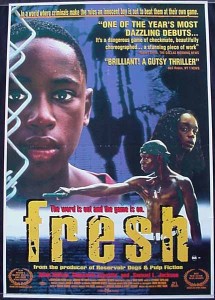 Fresh is an ironic title, because despite arriving on the scene in the mid 90s with a burst of originality and tinged with that ‘new idea’ smell, Fresh-ness is temporary. A sad fact, especially when you consider that ‘stale is forever’… Right Sandler?

He is named Michael, but everyone calls him Fresh.

Fresh is a young pre teen wise well beyond his years through the necessity of inner city living. He deals drugs after hours in the streets while being watched from adults (who would do time if caught), dealing with junkies and ne’er-do-wells with maturity and aplomb. He picks up and delivers larger quantities of drugs for his main employer Estebon, a magnetic yet scuzzy individual who quizzes Fresh about how he might get his greasy paws on Fresh’s older junkie sister. Yet he still gets acutely embarrassed and nervous when informed that he is in trouble for being late to class – he sagely doesn’t explain that the reason was a big illicit drug deal held him up.

You get the impression Fresh wants to do more ‘kid’ things, but you also worry that these days may have passed him by already. One heartbreaking scene has Fresh witness a shooting in the basketball courts with two innocent and unnecessary victims.

Fresh is a whip smart kid living in an uncompromising world that he knows but couldn’t yet possibly understand. The one middle ground seems to be playing chess with his estranged father Sam (Samuel L Jackson), himself a promising chess prodigy who succumbed to a darker life. Now all Sam does is hustle for small change, sparing time to pass some blunt messages on to Fresh mid game. Messages that are about chess tactics, but that nonetheless parables for real life.

Fresh decides to use these lessons to make his existence better, with him a mere expendable pawn in an increasingly dangerous game.

Fresh is hardly an action film, nor is it a gang film like Boyz ‘n The Hood. It is an intelligent film set in a familiar backdrop that veers in directions you wouldn’t predict. Often suddenly violent and dark, especially later in the film, Fresh is also well acted, with a standout performance by Sean Nelson as Fresh. If that central role didn’t work, neither would the film, so it’s a estaminet to his efforts that this criminal,y under acknowledged film is as good as it is.

Final Rating – 8 / 10. Proof that freshness need not be temporary, in fact, occasionally being fresh can also produce something classic.