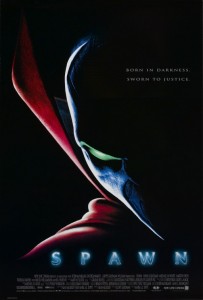 The battle between good and evil has been going on forever, and will continue until someone manages to convince Lady GaGa to pick a side and tweet the decision to her followers, sending her global army of little monsters into a overly made up frenzy of empowerment and marketable disenfrachisement.

In 1997’s Spawn the Devil sees fit to send his personal recruiter the Clown (John Leguizamo) to Earth with a mission of converting as many souls as he can in order to tilt the balance of power Evil’s way.

The most coveted of all souls is that of Al Simmons, a highly trained and exceedingly deadly killing machine who only recently found a conscience and changed his ways, leading to his unfortunate demise at the hands of his corrupt boss Wynn (Martin Sheen using a gruff voice to appear ‘evil’).

Sold out, charred to a crisp and left for dead, Simmons is summarily dubbed Hell Spawn by Clown and informed he will be a general in Hell’s army. Simmons initially rejects the offer and instead goes home to his wife and son, only to find that 5 years has elapsed since his ‘death’ and his wife has moved on to Simmons’ ex work buddie. Furthermore as Simmons looks like a deep fried Mars bar even his own daughter doesn’t recognise him. His little yappy dog does – so that’s something…

That’s essentially the set-up. We’re supposed to wonder if Simmons will opt to join the forces of evil or try something else altogether. But the film doesn’t think we’re that smart, so even though we’re only 20 minutes into the film, Simmons has a sudden flashback that covers practically all the dialogue from the first quarter hour. Two minutes later Clown feeds him another flashback that covers the rest.

Let me tell you, I didn’t think anything in the first 20 minutes was that good or complicated the first time around. I really wasn’t hanging out to see it again.

Eventually Simmons meets some old wise guy who dresses like Hugh Jackman in the equally atrocious Van Helsing and talks a lot without saying a damn thing of interest. He manages to help Spawn unlock his inner powers, such that in one short sequence he becomes an armoured, self healing, multi-gadgeted go-getter.

With no family, no friends and a complexion best described as ‘thin and crispy’ Simmons decides to use these powers – not for good, not for evil – for himself.

Look I am one of the few that thinks Johnny Legz is a decent and charismatic actor but his Clown is by far the worst thing in this film – only the film desperately wants us to think that this ‘Beetle Juice via Aladdin’s Genie hybrid’ is edgy and dangerous. However they try to sell it with fart jokes, gay jokes and eating maggoty pizza (which apparently Leguizamo actually did). The dialogue in Spawn is regularly pathetic and often regrettable, and the worst of it emerges from Clown’s fat face.

Elsewhere the sombre Michael Jai White shows exactly why I just had to imdb his name, and he and Martin Short have a contest to see who can speak with the gravelliest voice. Nobody wins. Every other actor ranges from wooden to splintery.

Spawn was supposed to launch a thousand spin-offs from the comic book artist Todd McFarlane’s stable, instead it sank any notion of more. It isn’t really even Spawn the character’s fault, he has some cool toys and reasonable motivation to be the anti-hero, just as much as Blade or even Batman.

But this film is a shonky Batman clone so transparent and clumsy that it isn’t funny. Or catchy. Or original. Or remotely meritorious in any way.

Final Rating – 4 / 10. Spawn wants to be the serious mature option for alterna-types, unfortunately it ends as cutting edge and juvenile as an episode of Punky Brewster and only a third as entertaining.