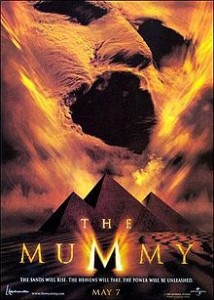 So is it really any wonder that the undead Imhotep might be a mite grumpy if someone was foolish enough to free him from his tomb and reanimate his corpse?

Which is exactly what happens 3000 years later when Rick (Brendan Fraser) Evie (Rachel Weisz) and her brother John raid the burial chamber of Hamunaptra in search for ancient hidden treasures.

No-one really cares about the search though. The ‘fun’ starts when the gan unwittingly unleashes the unfriendly undead onto an unsuspecting crowd.

By this stage I was already quite uninterested.

In truth the titular Mummy is not a mummified corpse as Imhotep was buried alive, but more a fleshless zombie searching for food… and we know what that means.

Bring on the minions. 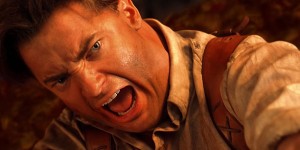 But in this case the *cough* Mummy wants Evie too – 3000 years is a long time – and so Rick and John must spend a good 40 minutes alternately fleeing, chasing and avoiding computer generated variousness including bugs, locusts and of course more angry skeletons.

It’s all extremely teen’s own stuff – and in my mind teens only. I’m all for suspending realism and fantasy elements, but when these things verge into stupidity I quickly check out.

Final Rating – 6 / 10. This review was far briefer than I intended but The Mummy just isn’t worth the effort. Like the treasure they all seek it is sparkly and shiny, and entirely over-rated and not worth dying (or killing my brain cells) for. 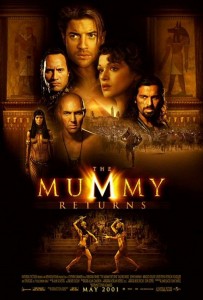 Somewhere in the bloated corpse of The Mummy Returns is a fairly decent action fantasy flick trying to get out. Unfortunately it suffocates in an over-ambitious jumble of annoying kids, ridiculously unnecessary dirigibles and computer generated fluff.

The O’Connells are still in the desert looking for treasure, Rick (Brendan Fraser) is still the deep voiced Indy lite, while wife Evy (Rachel Weisz) is having some especially convenient visions of former lives that advance the search.

In an especially welcome move The Rock was cast to provide both beefcake and lovely eyebrows as the Scorpion King, an ancient leader of a marauding army cursed to remain immobile for eternity… or until unleashed upon an unsuspecting globe by grave-robbers – whichever comes first. 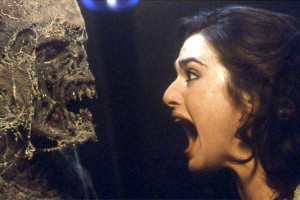 Within minutes of the film opening the competing digging teams manage to unearth dusty Imhotep himself. With the Scorpion King’s arrival imminent though it seems that old Immy is barely an afterthought this time. To spice things up it turns out that the entire O’Connell clan is karmically involved in proceedings. Yep I said clan – turns out Rick has done some digging of his own with Alex the annoying young kid as the unfortunate result. Don’t they normally wait until the third film in a series to run out of ideas and unleash the kid? I can only wish, in one scene the naughty Imhotep and his crew kidnap Alex and take him away, yet for some inexplicable reason his parents actually choose to hunt him down and take him back.

There is far more action in this film set against desert backdrops as dry as Lindsay Lohan’s head after a big night out. Now ‘Uncle’ John (John Hannah) is selected as comic relief along with the yappy kid – both big mistakes – but as with all of these flicks it is the special effects that are the real (only?) draw, and like the film they’re not bad…

As mentioned with a few choice cuts (kid, dirigible chase) this could be OK, but it suffers from not enough Rock and more Mummies than a shopping centre coffee shop on a weekday morning. That and the fact that Fraser couldn’t carry Harrison’s Ford’s hat, combined with a deliberately PG lilt, means that while The Mummy returns is watchable at times, it is nonetheless just another middling piece of disappointment.

Final Rating – 6.5 / 10. At one point a character utters the phrase “There is a fine line between coincidence and fate”, and an even finer one between ‘blockbuster’ and ‘waste of money’. 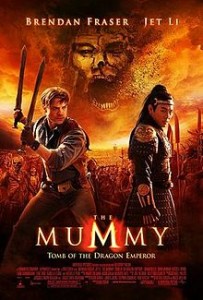 The Mummy: Tomb of the Dragon Emperor

Now where were we?

After over three cinematic hours of this they apparently grew as tired of it as I did and decided to pull up stumps for a while in their stately manor.

However innocent movie-goers don’t fleece themselves, so after some hackneyed events of convenience Rick and (new) Evy (no longer Rachel Weisz, now decidedly less interesting Maria Bello) arrive in China, just in time to become embroiled in the latest mummy related shenanigans. 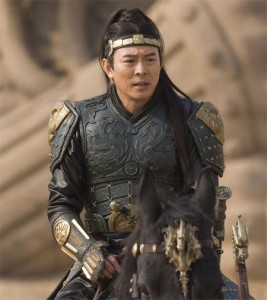 This time the mummy in question is an ancient Chinese emperor (Jet Li), cursed and immobilised forever – along with his thousands of loyal soldiers – patiently waiting for his curse to be lifted. This day comes when the O’Connell’s son Alex, now grown and still every bit as annoying, manages to circumvent numerous booby traps and guards to free the emperor from his underground prison.

And it’s only a hop, skip and a glowing orb before the Emperor is wreaking havoc in the Chinese streets with his undead horse and buggy combo.

Now it seems the three O’Connells and a cute female Chinese guard charged with protecting the tomb must prevent the now spritely Emperor from freeing his earthen army and laying waste to one and all.

Might I pause here for a moment to suggest that while it is indeed noble and very worthy that the O’Connells keep battling these fiendish and exceedingly dangerous undead foes, you can’t help but think that they are usually responsible for the perils becoming unleashed in the first place!

The last hour involves the usual running, screaming and bug-eying, and while it might be a bit rich to accuse a series about ancient undead people coming to life of going too far, but seriously, Yetis?

Amazingly enough this film manages once again to very nearly entertain at times thanks to some of the most overt mimicking of segments in the great Indiana Jones films. Thanks to this theft it matches the second film in the trilogy in terms of adequacy.

While I try to throw a joke or two into proceedings when I can all of the opinions presented in my reviews are genuine. I don't expect that all will agree with my thoughts at all times nor would it be any fun if you did, so don't be shy in telling me where you think I went wrong... and hopefully if you think I got it right for once. Don't be shy, half the fun is in the conversation after the movie.
View all posts by OGR →
This entry was posted in Crappy Movies, Film, Movie Marathons, Movie Reviews, The Grey Area. Bookmark the permalink.