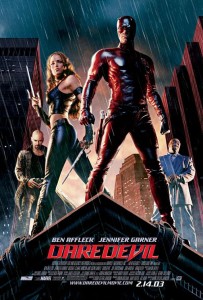 Superheroes by definition should be better than us. More noble. More principled. Better equipped to handle extraordinary situations and the threat of whatever evil is on the menu at any given time. In short they should be at least a little bit super.

From the opening minutes of DareDevil it is obvious that the only thing ‘super’ here is soon to be the level of frustration and annoyance.

After young Matt Murdoch’s dad let’s him down, he goes out and gets blind. Not blind drunk… Blind – can’t ever see again – blind.

…Actually it’s quite a tragedy.

Of course with all that blindness Matt can’t help but find his other senses elevated, to the point that he is a more capable human being than all us indulgent ‘seers’. He can even use the vibrations to ‘see’ his surroundings anyway.

(For the record; it was a mere fifteen minutes from the opening credits to the point I loudly exclaimed “fuck I hate this film”. Shia La Beouf films take longer to elicit such a response – or they might if I ever deliberately watched one.)

Without the pesky annoyance of actually seeing problems, obstacles and threats, Matt decides after his Father’s passing that he will simply no longer fear anything (good for him), and one way or the other he will ‘see’ justice served. That’s two ways for those counting at home.

Apparently justice arrives in an ill fitting creaky red vinyl suit that he probably made in the dark… Oh wait… Well this is awkward… Yet explains so much… I mean why even give it eye holes?… Just seems mean really…

Unhampered by fear, logic and a coherent script, Murdoch becomes a smooth lawyer by day and a superhero with the agility of Spider-Man and the fighting abilities of Batman by night. He leaps from building to building, lands on his feet after immense falls, and conducts bar fights vs multilevel opponents with little difficulty.

It is in lawyer guise that he meets Elektra, the wealthy daughter of a millionaire magnate. They form an instant idiot connection, made stronger by one of the most god awful fight sequences on film. Both leave certain that they have just met their soul mate. While I consider whether I have the inner strength required to last another 90 odd minutes of this.
Superhero movies are known for there cheesy dialogue, short and punchy sentences designed to fit into a comic book pane. But here the dialogue is cheesy for a superhero movie. In fact it would be cheesy even for cheese.

Poor old Michael Clark Duncan arrives as The Kingpin, which subtly suggests that he isn’t the best guy going around, before – even more regrettably – Colin Farrell inexplicably decides to be Bullseye the hitman, a man so dubbed due to his propensity with all things capable of being thrown. Usually to the detriment of other people. His ‘bullseye’ facial scarification and incredulously exhorted “BUT I NEVER MISS” are surely among the film’s countless soaring highlights. He’s also probably quite good at darts…

More stuff happens. I implore you to save yourself the ignominy of discovering exactly what.

By the time DareDevil used the falling raindrops to ‘see’ Elektra for the first time on a deserted rooftop I was long since out of bile. Nonetheless I was still strangely amused when he felt impelled to leave suddenly to correct an injustice happening down a nearby alley – and apparently a perfectly dry one. The rain then stops and starts a few more times as the lamentably staged chase ensues.

There are hundreds – well dozens – of superhero films available, with more emerging every couple months. While some enthusiasts eagerly await every new release with breathless (in fairness going by stereotypes most are asthmatics) anticipation, most punters roll up to the latest big budget superhero flick hoping for a couple hours release from the real world, and ideally a few laughs and thrills.

Strangely though there are only a few superhero films almost universally derided. This one. Catwoman. The first one with Shia La Beouf as any superhero called ‘We’re outta ideas”.

I’ve heard the excuses and listened to the reasons why this is unfairly trashed. I have now seen *slash* endured this red suited reprehensible ness twice, and decided that sometimes hatred isn’t nearly sufficient. I am beyond hatred. I pity DareDevil and anyone who has the misfortune of indulging it.

Final Rating – 4 / 10. I would think that any detractors to Ben Affleck’s recently announced role as Batman should hold this up as Exhibit A.