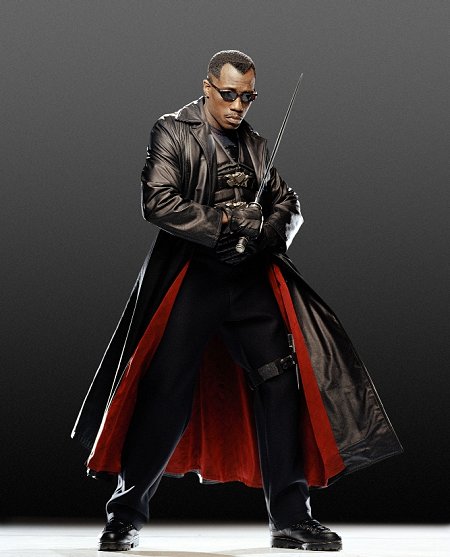 Blade at his most Blade-iest.

Blade is one of the cooler comic-book character to cinema adaptations going around. Most guys who were in their teens or twenties when they saw the original remember it fondly, cinema snobs with an action bent (myself included) give the nod to the second.

I can’t think of anyone who would rightfully claim to enjoying the third, except Ryan Reynolds’ Mum, and surely she must be tired of him by now too.

Pre-emptory disclosure, I originally reviewed Blade 2 as a Great movie a few years ago. You can bet your sweet monkey-ass that the review below is merely a brief summary compared to that overlong indulgent love-fest. It’s linked above if you want a read. 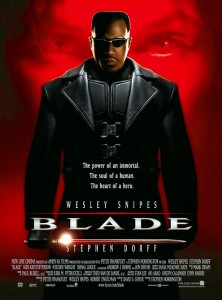 The first 15 minutes of Blade are pretty awesome for any film, action or not. This quarter of an hour neatly introduces the bad guys (Vampires), shows swiftly that this will not be a PG effort (a bumping club turns into a blood shower, from above – and among – the dancing horde), and highlights the ornately tatted, intricately shaven and heavily kitted out ‘daywalker’ known as Blade, in a sequence that shows both his martial arts skills and array of deadly-to-vamps toys.

It is the nifty combo of truly cool and action packed, both at the same time. Blade too is gruff and deadly, but undeniably smooth and even a little irreverent. He is Wesley Snipes signature role, and he was right to be pissed when Blade: Trinity tried to introduce new characters to the universe while marginalising the half-human, half vampire, all deadly hybrid.

The sequence ends with Blade killing many vampires and escaping to lair with a new addition, the recently bit Dr Karen Jensen, a full time hematologist and part time hottie. Blade introduces her to his father figure and Bond style gadget man Whistler (Kris Kristofferson) and asks him to ‘cure’ her of her 24 hour vampirism. (It’s been going around this year…). If Blade is gruff then Whistler is gruff with a side helping of ornery, he berates Blade for bringing an outsider into their haven but nonetheless does what he can.

And with that Blade is out once again pursuing the vampires, notably Deacon Frost (Stephen Dorff – the broke man’s Christian Slater), who has rebelled against the more staid and reserved elements in the vampire nation, and is in the process of translating ancient vampiric texts with the aim of unlocking powerful secrets that might aid the vampires to overthrow the humans once and for all.

Blade and Deacon do their bits to keep the interim plot developments and action sequences worthwhile, but of course a stand-off is inevitable and it is the middle hour or so where the momentum lags just a little, with a couple of notable action sequences and the appearance of a giant fat vampire record keeper with a helium voice trying vainly to keep the film afloat.

I have decried all claims as to Blade’s greatness since its release in the late 90s and I continue to do so today having watched the film and admired it for perhaps the 5th time. This is despite the numerous elements that seem to add up to greatness or at least near-greatness… Blade boasts good locations, an exceptional soundtrack, a better than average backstory, some solid visuals and good (for the 90s) CGI effects, all supporting one of the better realised central characters in superhero film history.

Blade simply exudes cool and Snipes is the ideal embodiment for the character, a cool muscly black guy with hand to hand skills, the ability to crack a joke and a limb with equal effectiveness and style to spare. The man would no doubt butter his bread with such a flourish as to make the act mesmerising.

But alas a great start and a solid setup was not capitalised on sufficiently to warrant greatness. The film is 20 minutes too long and gets too excited with the karate kicking stuff, eschewing most of the benefits of having vampires and a kick-ass half vampire in the process.

I can however totally understand why many exalt Blade as one of the best comic-book to film adaptations, but in my view Blade is a better character than a film. (I think Blade 2 came up with a film that matches the character’s coolness quotient. THAT is a cracker of a comic to film adaptation.) Whistler is a capable second banana but at that stage wasn’t fully defined, and despite a couple of moments Dorff’s Frost was simply not quite evil enough to be the ideal nemesis standing in Blade’s way.

Final Rating – 8 / 10. Blade is an undeniably cool film despite a few faults and underwhelming characters. If they managed to make the last hour and a half as good as the first 15 minutes it like Blade – would’ve been nearly immortal. 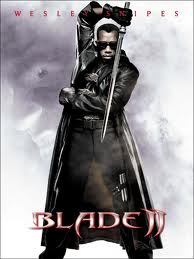 Blade 2 is just… better. In every respect.

When former enemies the vampires drop by for a visit to tell Blade and crew about the latest threat to mankind called Reapers, he is understandably confused. After all, aren’t the vampires the bad guys?  After a brief chat the Blade posse hitch a ride to Vampire HQ for the exposition part of the film, where the next 90 minutes are nicely mapped out for us, allowing Blade to get to the serious business of killing various things.

After Blade is told all about the Reapers by head vampire Damaskinos – in short they are a threat to both vampire and human alike – he is introduced to the Blood Pack, which include the usual Gen X crew of tattooed, pierced muscle bound freaks, including the underrated Ron Perlman and the horribly under-utilised in this film Donnie Yen.

There is very cool bit where Blade effectively shows the Pack, including Ron, just who is running shit, it’s worth watching more than once, and as GDT realises that, he makes Blade do the same thing again.

There are three “BIG” scenes in the film. The first is the stakeout and search of the House of Pain, a vampire club. Coincidentally the best bit of Blade by far was also the scene in the vampire club, at least Blade 2 has several other scenes which are almost as good, which the original did not.

In the first showdown between Blade and Nomak it appears that they are quite evenly matched, and that Nomak has had some karate lessons on the sly, we are given a taste of what might come, but ultimately it is left for later.

The second BIG scene occurs when the Blood Pack and Blade venture into the tunnels to take on the Reapers in their home turf, even though it contains much of the action and killing in the movie it is simply a prelude for the even BIG-ger finale to come.

The final BIG scene is the showdown that occurs at vampire HQ, and it has everything that a grown boy needs from his vampire flick: torture, stylised violence, faceless henchmen that are really only fodder between boss fights, WWE Smackdown moves, blood-baths and of course SUNGLASSES!

If you were underwhelmed by Blade, or can’t be bothered with most comic book adaptations I would still urge you to check this out. Blade 2 isn’t just Del Toro cutting his teeth, it is a really solid movie when considered on its merits. It stands head and shoulders above Blade and (especially) Blade: Trinity, neither of which I own.

Final rating – 8.5 / 10. Up there with The Dark Knight as one of the best comic adaptations going. I’ve watched this 4 or 5 times now and it never gets old. Highly recommended. 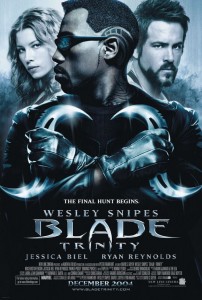 Straight from the ‘You know this won’t go well’ files comes Blade: Trinity, where despite an excellent original film and an even better sequel the filmmakers decided that Wesley Snipes’ cash-cow couldn’t go on without an unnecessary tune-up, leading to the very reason behind the phrase  If it ain’t broke, don’t fix it.

But alas they didn’t. They fucked it in a ménage-o-trash gumbo consisting of Ryan Reynolds, Parker Posey, Jessica Biel’s headphones and even a blind girl.

Here are but a few reasons Blade 3 sucks:

(I should end it there. But no, you have a right to know and we’ve come this far.)

We’re out of good ideas #1. Let’s make one of the vampire killing team blind. That will make her especially vulnerable and we’ll feel sorry when she is hunted by a vampire. You know, because fuck sighted people, they deserve what they get.

We’re out of good ideas #2. Would we be going too far to give old blindy a young daughter that she couldn’t possibly offer safety to in a vampire hunting environment? If she’s taken surely everyone will feel sorry for her too

That’s it, We’re officially out of even average ideas #3. We need a real bad guy everyone will fear… Dracula???

Notice that until now I haven’t mentioned Blade himself? That’s because he is moved to the periphery in this film to allow Hannibal and Whistler’s daughter to take centre stage, probably in the vain hope that a spin-ff would ensue. Blade’s scenes are actually pretty cool – of course they are, he’s a cool character – I mean who couldn’t see that after watching the first two films…?

There is exactly one good scene in Blade 3, it involves a vampire blood-bank and lasts 5 minutes or so. In truth it is more a cool concept than a cool scene, and it seems tacked on, never to be followed up again. Which like the misuse of Blade is more frustrating to have and not use, than to not have at all.

As the brat pack and flaccid vampire crew wrestle over who will get to Dracula first – he’s the key to winning the vampire war don’t cha know – you simply bide your time waiting for the inevitable Blade / Dracula face off. When it finally arrives it is just as limp and disappointing as the rest of the film.

Final Rating – 6 / 10. Blade 3 has no flow, too many unlikable goodies and lame baddies. It’s all just so effortlessly cool; except it so totally isn’t.

Trilogy Summary: 7.5 / 10. Yet another trilogy tarnished by the very fact it became one. The first two films could rightfully stand as one of the more successful pairings in comic book adaptation history, better than the first two films in the Spiderman, Iron Man and X-Men.

Then they made that accursed third one…

While I try to throw a joke or two into proceedings when I can all of the opinions presented in my reviews are genuine. I don't expect that all will agree with my thoughts at all times nor would it be any fun if you did, so don't be shy in telling me where you think I went wrong... and hopefully if you think I got it right for once. Don't be shy, half the fun is in the conversation after the movie.
View all posts by OGR →
This entry was posted in Film, Movie Marathons, Movie Reviews, OGR Recommends, Worthwhile Movies. Bookmark the permalink.