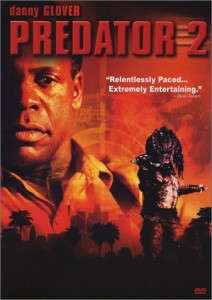 The original Predator is an undisputed science fiction masterpiece, with a brilliantly realised other-world assassin, a series of kick arse action scenes and a cigar chomping Schwarzenegger in his genetically engineered prime spouting stupidly catchy catchphrases.

It was always a concern when they couldn’t get Arnie back, especially when they replaced him with no-one’s favourite action hero Danny Glover. And surely switching from the steamy South American jungles to the gang infested Los Angeles streets was a death sentence for the series?

Surprising not, for while Predator 2 is hands down the silliest mainstream film this side of Shoot ‘Em Up the gleefully ridiculous Crank films (all of which I heartlily recommend), it is ludicrously entertaining also, taking full advantage of Predator – the real series hero.

The Los Angeles in Predator two is a strikingly similar environment to that in Robocop and Total Recall, colours and characters are bright and larger than life, and uber-violence can break out at any minute with only scant interest from bored onlookers.

This Los Angeles is especially rife with gang warfare, in the streets vicious gangs differentiated by only the nationalities of the members wage street battles with the undermanned and outgunned police. Fortunately Harrigan (Danny Glover) is on the side of the boys in blue, appearing whenever things are at their lowest ebb to save the day by blowing holes in bad guys.

So when someone else starts elbowing in on Harrigan and Co’s turf – someone blurry – he and his crew, which include Maria Conchita Alonso, Pill Paxton and Ruben Blades, take notice.

So too do the ‘authorities’, so dubbed because they apparently don’t officially exist. They are fronted by Keys (the inimitable Gary Busey, who is already so off the wall despite still having about 15 brain cells left in 1992, a far cry from now when he is just as likely to chew on your hand as to shake it), and they desperately want to track down the Predator for themselves, though not necessarily to kill it.

Back to the new blurry kid on the block. This time around the Predator sports far more toys than last. He has a cool net, a long pointy spear – with extensions! – and a discuss looking thing that is apparently a do-it-all tool. Thankfully though things don’t get too silly where he is concerned, though the mimicking selective phrases thing gets old real fast.

The arrival of P2 has all in a tizzy, Harrigan and Co, the ‘normal’ police force, the Busey lead ‘authorities’ and the drug and crime gangs that litter the city. The arrival of the Jamaican crime boss ‘King Willie’ might come and go in a scant few minutes, but it manages to squeeze in enough phrases and quotables in that short span to provide sufficient samples for a decade’s worth of rap albums.

Ultimately though this film was always going to end in a face off between Harrigan and Predator, perhaps the filmmakers realised this was inevitable too, as the sequence runs for a long time, during which the Predator must make it at least appear that he is evenly matched with this middle aged man who to that point in the film has spent 90% of screentime sweating and yelling.

Despite this – or perhaps because of it – Predator 2 is absurdly entertaining and in my opinion has unfairly been relegated to the ‘Why bother?’ section of cinema history. Sure it is rude, crude, vile, outlandish and often clumsy, but it ain’t bad.

Final Rating – 7.5 / 10. After being the bad guy Arnold Schwarzenegger decided that for the rest of his career he wanted to stay the good guy. The Predator was the only single nemesis worthy of an in his prime Arnie. I bet he wished he hadn’t knocked this film back when the scripts for End of Days, The 6th Day and Jingle all the Way started looking like viable alternatives.