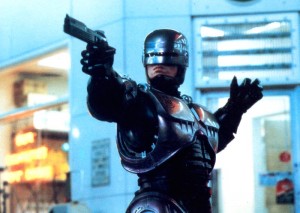 As far as a cop would go sure a robot with the common sense and logical capacity of a human would be handy, especially given the assumed strength and durability of the robot bits.

But in the world of superheroes or truly dangerous and formidable foes Robocop sorta just… sucks.

I mean really over the three films he caps around 25 bad guys and gets absolutely demolished and in need of major repair in every. Single. Film.

His major ‘skill’ is the ability to shoot relatively straight and to deliberately ricochet bullets at certain angles. So trick shots is his superpower basically. Yet if you have the equivalent of an Atari 2600 or similar you could probably hack in and alter his programming so that he might target the weak and innocent, or his own colleagues.

I’m pretty sure he’d short circuit if he passed a microwave, and I’d guess he’d be fucked if he got tasered.

All in all quite a sucky hero really. But all that said they ended up making three of these things. And here they are, so without further ado…

Once upon a time, in a world gone to shit… 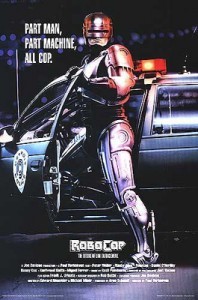 Future Detroit is a mess, crime is rampant, poverty everywhere and the privately run police force either outmatched or as crooked as those it should be chasing. The most formidable bad guy out there is Clarence Bodicker, a ruthless killer who reigns supreme over a rag tag bunch or similarly slack-moraled minions.

Unfortunately for Murphy (Peter Weller) his first day after being transferred to the most dangerous station in Detroit see him cross paths with Bodicker’s bunch and turned into something resembling a rissole in front of his partner Lewis (Nancy Allen).

The next day Murphy’s still twitching corpse is reanimated and finds integrated into various metal parts that form the chassis of the guy on the poster: Robocop.

Robocop is a crime fighting cyborg programmed to uphold the law and unleashed upon a city in dire need of serving and protecting. The early stages of his duty are – as Borat would say – ‘great success’, but after a few days and a few bullets to the head Robo-Murphy starts experiencing glitches, flashbacks, memories… things that a robotic being shouldn’t have.

After a few unfortunate occurrences the human police force turns against ol’ Roby and call a strike which leads to even more chaos and disorder than a Sunday morning at the Charlie Sheen household.

Can Robocop save the day and differentiate between Murphy and its Cyborg self?

You’ll have to watch to find out.

Robocop hasn’t aged well, but it does have a few noteworthy elements. There are frequent clever ‘future’ ads shown through the film that are filled with very black humour, and some other moments that show how the lust for new technology isn’t always for the benefit of society.

While exceedingly violent the onscreen action features more splatter than gore, meaning although many die in a hail of blood and bullets it really isn’t too realistic and upsetting. If anything the more guys that get mown down the more ‘meh’ it all becomes.

The design of Robocop is actually very impressive and he gets to coin a few catchphrases of his own while upholding the law in his own carefully programmed way, even if in reality the question might be asked ‘what use is a robot-cop that can still be taken down by gunfire anyway?”

Final Rating – 6.5 / 10. Hardly an 80s action landmark when compared to Predator or Die Hard, Robocop was nonetheless a worthwhile film that has dated badly and been superseded by the ultra-violence that it satirised. 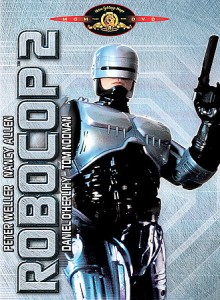 The first 10 minutes set out to prove that this right here is no cheapie cash-in of a sequel. The two hours that follow have Murph-O-Cop protecting innocent citizens by blowing away various bad guys, recalling his wife and kid while dastardly high ups in the police force seek to erase such memories.

It isn’t terrible, but it is so similar that if you took the numbers off the DVD boxes and discs you might be hard-pressed to pick one from the other.

In the same ‘kill or be killed’ lawless society that is urban Detroit the privately run Police force look to cut corners and this time actually promote anarchy so they can divide up city assets and sell them.

Once again it seems there are precious few good cops – the bulk are on strike again – Robocop is obviously one, the last bastion of hope, decency, law and order. The other is Lewis (Nancy Allen), who if you think about it rationally was Murphy’s partner for exactly one shift before he became a potato, so trying to remind us of the solid bond they once shared is a little bit rich.

Anyway Roby gets toasted again by the bad guy of the day in this dystopian future – this film’s name is Cain – and his ‘Nuke’ cult of criminals complete with a well presented but essentially evil young teen in tow calling many of the shots.

Roby once again gets an end-of-film nemesis, this time a primitive 90s CGI created one fuelled by the very drug Robocop is out to save the city from.

Look they tried pretty hard, this really was all you could when in reality the first film wasn’t much chop to begin with.  But I think this scene sums up the attention to detail: Robocop drives to a gate, he exits the car to open the gate and the camera pans to show that he is being watched through the eyes of many crouching bad guys. The car moves forward and… BOOM! Explodes in a fiery ball of death. The criminals advance cautiously only to have Robocop emerge and start blazing away…

Re-read that if it sounds fine to you. Did every criminal’s eyes follow along when the camera panned??? 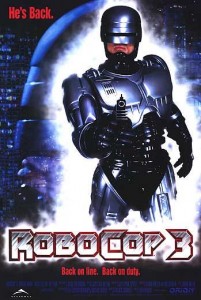 One this film is decidedly PG, no real violence, blood, or profanity, and the black comedy in the fake ads is toned down accordingly too.

The second is the introduction of what should have been a cool nemesis for the slow and ineffectual automated upholder of the law: a Robo-ninja. But they fucked that up too – more on that later.

Detroit must’ve gotten tired of being the scungy future city, in this film most of the action takes place in the fictional Delta City. This time OCP, the company that runs the police force has been taken over by a Japanese company, meaning everything is more efficient and profitable – even the Robo-Ninja.

I won’t spend much time on this one because this is where a mediocre franchise really hit the downslope and got desperate. Roby 3 has a genius tech savvy 6 year old working alongside the resistance and performing elaborate hacking and programmes with her rudimentary laptop that is bigger than her. It also introduces Lewis with such drama and seriousness that you would think it was a De Niro reveal. Nope, just the same untalented actress still hanging around dining off the same one shift association with an automated cop.

A typically seedy and punkish looking gang serves as the resident minions, and it is 20 minutes before we even see Roby this time out. Peter Weller has gone, but that was never a big factor anyway, consider this just another set of lips spouting the same banal dialogue and cheesy catchphrases.

Everyone is still surprised again when he thinks for himself, again he is gunned down and left for dead, and again once he realises just who is behind everything he comes up against a purpose built Robo-Cop-Killer, the altogether too built up Robo-Ninja.

Look I hoped like hell that the battle of the Robos would rock, which made the awkward pacing and two or three moves before a crappy killing stroke battle that followed so disappointing, I can’t stress enough how dodgy the two confrontations between the Robo’s are.

In fact the ‘massive’ finale is full of tacky sub-Troma-esque touches. In a street battle with hundreds of enemies face to face on both sides and thousands of rounds fired no-one dies until Robo-Cop shows up, and after he wins the day in 15 seconds flat everyone jumps around like drunk idiots after the superbowl.

Final Rating – 4.5 / 10. The first two films weren’t much to write home about, but RoboCop 3 is lamentable, consigning the future’s most unnecessary and ineffectual robotic hero to the scrapheap. An ignominious end to an obsolete technology.

While I try to throw a joke or two into proceedings when I can all of the opinions presented in my reviews are genuine. I don't expect that all will agree with my thoughts at all times nor would it be any fun if you did, so don't be shy in telling me where you think I went wrong... and hopefully if you think I got it right for once. Don't be shy, half the fun is in the conversation after the movie.
View all posts by OGR →
This entry was posted in Crappy Movies, Film, Movie Marathons, Movie Reviews, The Grey Area. Bookmark the permalink.