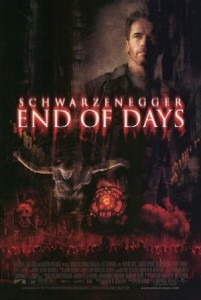 This poster is as lazy as the film itself.

Massive explosions fill the streets with no plausible reason forthcoming, and no-one seems to give a fuck…

Gabriel Byrne is taken from behind by a blurry apparition in a men’s restroom, and emerges a different man altogether…

Does New York know how to party or what!?!

New York City gives End of Days a nice backdrop, it is perpetually gloomy and menacing and filled with oddballs and men and women that could quite suddenly ‘do you wrong’.

Unfortunately any semblance of suspense or a slow build towards a satisfying conclusion is ignored in favour of a second half that swiftly devolves into silliness, histrionics and laughable – and obviously telegraphed – twists – with a film that in retrospect rips unashamedly from the 80s action-comedy The Golden Child.

Arnold Schwarzenegger is Jericho Cane, a burly ex-cop with what you might think is a dumb, poorly chosen Hollywood name. That is until we meet his partner BOBBY CHICAGO!!! (Kevin Pollack).

The pair form part of a team of rent-a-heavies who perform protection and bodyguard work for high rollers and low lives with money. After they foil a brazen hit on an unnamed guy (Gabriel Byrne) that occurs in broad daylight, they quickly discover that they should have turned a blind eye, which would have meant a shorter film but saved me from wasting another 90 minutes.

The core plot involves the usual pap of an evil guy – in this case likely THE evil guy himself – coming to Earth to mate/takeover/kill a chosen human before a pre-determined deadline. Wait what was coming up in three days?

This time the target is the snake-blood chickie Christine York, now alls growneds ups, suitably cute, vulnerable and just innocent enough to not understand what is going on for around an hour despite much evidence and alarm bells going off all around her, in what turns out to be a vast 2 decade conspiracy permeating many levels of society, (and almost every non-Arnold & Christine character in the cast).

I can’t say what the Man has in store for young Chrissy, but whatever it is it will inevitably be sticky…

Cane and Chicago make breakthrough after breakthrough in the case yet constantly remain a step behind the Man, until the film dictates that it is time for them to come together in a shitstorm of noise, over the top stunts and shoddy CGI effects.

End of Days grows increasingly stupid the longer it goes, and at over two hours that’s a whole lotta stupid. The plot developments rapidly go from inching along to ludicrous and annoying, and even mocking Arnold’s thick accent tires quickly without the macho dialogue of his big-dumb-action flicks to clumsily mimic.

What is perhaps worse is that Gabriel Byrne twigged early in proceedings that this wasn’t going to end with an Oscar and positively snoozes his way through the film, his ‘Evil guy’ is so generic and lackluster that he is out-acted by Arnold Schwarzenegger!, (who really only has his bug-eyed look and jutted jaw of defiance in his arsenal in the first place).

I have said it many times before, I am a sucker for thrillers, dramas and horror films with theological elements and backdrops. I find even an average effort entertaining and engrossing if they somehow inject religious and spiritual themes into proceedings.

But I have my limits.

Final Rating – 4.5 / 10. There are numerous films where the primary threat is the end of the known universe, here was one time I was hoping the bad guy would win.

While I try to throw a joke or two into proceedings when I can all of the opinions presented in my reviews are genuine. I don't expect that all will agree with my thoughts at all times nor would it be any fun if you did, so don't be shy in telling me where you think I went wrong... and hopefully if you think I got it right for once. Don't be shy, half the fun is in the conversation after the movie.
View all posts by OGR →
This entry was posted in Arnie Schwarzenegger, Crappy Movies, Film, Movie Reviews. Bookmark the permalink.