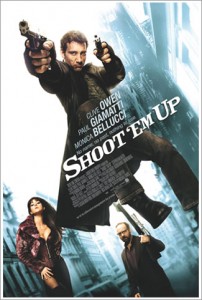 Posing during a gunfight takes poise.

Shoot ‘Em Up studied at the Crank school of stupid cool. In the Shoot ‘Em Up universe nothing is considered risky, implausible or over the top. Carrots are weapons, ammunition and weapons are plentiful and minions are faceless and expendable.

It is senseless complaining about a film as violent as this, because doing so would only prove just how out of touch you are with reality, seeing as how the actions in this film are so far removed from reality in the first place.

It also has Clive Owen in the lead role as Mr Smith, who must constantly fight off the henchmen of Hertz (Paul Giamatti hamming it up to the hilt), as the duo unleash a veritable arsenal from point blank range all over the city.

The fun starts when carrot chomping Mr Smith decides to earn a lifetime’s supply of karma points by escorting an orphaned newborn and Donna (Monica Bellucci), the hooker with a heart of gold (nestled somewhere beneath a pair of massive …) who specializes in lactating fetishists, to safety.

The movie starts at pace and doesn’t slow down until the credits roll. This is a film so dumb it’s genius. So unnecessary that it is most decidedly necessary. This is the kind of film where a patch of oil facilitates a long slide across the floor, during which the slider dispatches many enemies with mechanical precision, only to rise from the floor unmarked. The kind of film which would justify having a baby constantly present during gunfights with death tolls higher than natural disasters because ‘the kid loves loud noises’.

The kind of film where carrot related deaths are numerous… 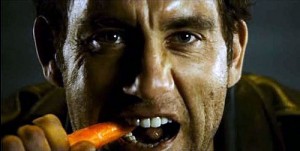 And it’s not supposed to make a lick of sense. It would have taken a dozen riggers and entire day to set up an elaborate series of pulleys, booby traps and ropes which enable Smith to take out perhaps 20 bad guys. In the film Smith takes maybe 5 minutes.

The kind of film where the line “Fuck you, you fucking fuckers” just sounds so right.

But why kill the baby you might ask? I can’t even remember any more, and I’m positive it isn’t even that important, at least not as important as the mid air gunfight that takes place after all participants leap from a jet is. All backed by AC/DC music of course.

Like the previously mentioned Crank films from the last few years, tongue in cheek is the operative phrase here. This film isn’t meant to enlighten or educate but for pure nonsensical entertainment value it can’t be beat.

Final Rating – 7.5 / 10. Gunfight after gunfight set to rock music might not sound all that whiz bang. This film proves that it can be it taken with an entire shaker of salt.