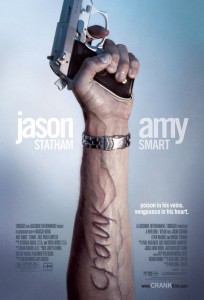 If you have a strong stomach, a willingness to try things that are perhaps more non-mainstream than most, and a funny bone not averse to black comedy and sheer absurdity – then Crank is for you.

And after you watch this if you feel like ‘crank’-ing things up a notch, try Crank 2: High Voltage for an even more insane ride.

I heartily recommend them both, although this is perhaps the more staid and slow – only by comparison mind you – of the pair.

Chev Chelios (Jason Statham) is an L.A. area hitman who wakes up groggy one morning with his veins pumped full of a fast acting Chinese deadly poison administered while he slept by a hated rival.

Chelios will die in one hour as his bloodflow slows to a crawl and eventually sputters out… unless… he can keep his heart rate so high that the pumper keeps pumping and his adrenaline and elevated pulse keep him – quite literally – ticking along.

Chelios’ decides not to take this sitting down, and fuelled by rage and thoughts of revenge he sets off across the city in search of those responsible, either to find the antidote – or if that does not exist – to kill the guys that did this to him.

Car-chases, cheap drugs and fist fights work for a while to keep motivating his vital functions, but to create adrenalin over long period a little more than your garden variety action and violence is required.

So many will die so that one man might live, and in so many entertaining ways.

Chelios wreaks havoc across the city. Remorselessly offing anyone who is in his way or even not offering assistance. Along the way he is periodically aided and abetted by his cross-dressing friend Kaylo, and unwittingly delayed and impeded by his girlfriend Eve (Amy Smart), with whom he performs some very public romantic aerobics as gobsmacked onlookers stand by.

Dwight Yoakum keeps Chelios focussed and on plan as the seedy and most definitely uncertified Doc Miles, with the two liaising over the phone as Chelios zigzags with bad guys of many ethnic backgrounds strewn in his wake.

Crank is deliberately stupid and insane and most of all fun for those who realise this. Statham is perfect for the action hero cut-out with nerves of steel and he also proves more than willing to pull the piss out of himself. Before Crank he was already action’s great white hope, after this and the sequel he is hands down the bravest and best equipped actor working in mainstream action today.

And all it took was a couple of the least mainstream films of the last decade to prove it.

Final Rating – 7 / 10. Eighty-eight minutes of adrenalin, action and insanity, all creatively directed and boldly plotted. Crank paved the way for Shoot ‘em Up, Crank 2: High Voltage (obviously) and hopefully all of the genre and good taste busting action films that will follow in years to come…