Jingle all the way (Review) 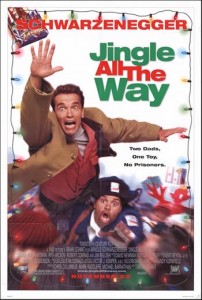 For 15 years Jingle all the way was nothing more than a recurring punchline to an occasional skit on the Conan O’Brien show.

I wish I could still say that.

Instead I must admit that I took the bold and regrettable choice to watch it recently, now it is so much more than a nostalgic punchline. And by ‘more’ I really mean ‘less’.

The plot – such as it is – revolves around the efforts of two hard working Dad’s to secure the hottest toy of the moment, thus winning the love and affection of their sons (and wives).

The two men are Howard Langston (Arnold Schwarzenegger) and postal worker Myron (Sinbad). Their ever-escalating feud over who gets to find the last remaining Turbo Man is alleged to provide the film with it’s humour, but like the atrocious Changing Lanes only serves to show that no-one cares who wins a race between two pricks.

Strangely enough despite this being an Arnold star vehicle I felt that he comes across as the most reprehensible of the pair. Hell I even hated Howard Langston more than Ted (Phil Hartman) the smarmy and scaly neighbour that wants to horn in on his wife while Howard is caught up in his ridiculous ‘war’.

In the first 5 minutes I mentioned to my wife that I was glad that this was a short film at 90 minutes – yep it was clear early on that this was awful – but at about the 40 minute mark I started ruing the decision to even press ‘Play’.

I hate shopping at any time of the year, Christmas shopping is obviously even worse for guys, there should be humour somewhere in such a painful exercise. But Jingle all the way only manages to identify the various frustrations and annoyances that confront occasional shoppers without squeezing a single noteworthy joke from them. So long queues, competitive shoppers, mall Santas and snooty clerks are alluded to but not maximised, (and let’s pretend the group of corrupt mall Santas selling bootleg toys didn’t exist can we?).

Jingle all the way is a ‘family comedy’ where the most sympathetic character is a painful git of a single dad who wants to bang the ‘hero’s’ wife. And I wanted him to succeed. Instead Howard continuously exhibits anti-social, immoral and violent behaviour, (including animal cruelty and shoddy parenting) in a film that is supposed to warm the heart and tickle the funny bone, but only serves to sicken my stomach. Not at the disgusting behaviour as much as the fact that they pass this crap off as a kid-friendly comedy when it is quite clearly neither.

Oh and spoilers be damned; after all that shit Howard gets the toy and wins the love of his kid and wife despite everything else.

Final Rating – 3 / 10.  An instant Christmas classic. As in ‘instantly’ rushing to the front of my most hated movies of all time list. I now know why it’s funny that the fake Arnold on Conan always tries to promote this film so.

While I try to throw a joke or two into proceedings when I can all of the opinions presented in my reviews are genuine. I don't expect that all will agree with my thoughts at all times nor would it be any fun if you did, so don't be shy in telling me where you think I went wrong... and hopefully if you think I got it right for once. Don't be shy, half the fun is in the conversation after the movie.
View all posts by OGR →
This entry was posted in Arnie Schwarzenegger, Crappy Movies, Film, Movie Reviews, The 7th Level of Suck. Bookmark the permalink.