Journey to the Centre of the Earth (Review) 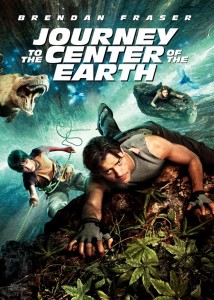 Journey to the Centre of the Earth knows its limitations and very nearly manages to overcome them. Work the 3D, keep the pace moving, put in some rides and chase sequences (steal ‘em from Indy Jones and The Goonies if you have to).

I can’t stress that last part enough, because this ‘Journey’ is all about the 8 to 12s. If you remember that and can manage to channel your inner pre-teen there is just enough to enjoy, if not and it’s going to be a long and lurid 90 minutes with Brendan Fraser and an annoying teen douche.

Perhaps in recognition of the attention span of most kids – and lamentably now adults, me included – the film moves at breakneck speed. Almost instantly after we meet scientist Trevor (Brendan Fraser) we are introduced to his surly dick of a nephew – and son of his late scientist brother. A half opened Jules Verne novel and a few jars of coins later and we are in Iceland meeting Hannah the guide following clues to the titular region.

15 minutes later and they arrive. Yep it is just that easy…

Now remind yourself it’s a kid’s film… and Now back into it.

Journey to the Centre of the Earth rarely pauses for breath or for logic to catch up, one minute the trio are finding diamonds and other precious gems, the next they are falling into a possibly bottomless pipe, the next they are watching an underground sunset on a beach thousands of miles from the Earth’s surface.

Every mis-step somehow manages to uncover new facts that help them, every wrong turn actually ends up right, with only occasional pauses to deal with the latest dinosaur, storm or Venus fly-trap attack.

Fraser plays the same Indy (and charisma) –lite character that he has perfected from The Mummy films, the nephew Sean has the usual about face from unappreciative tosser to fine young man that apparently only several near death experiences can bring, and the guide Hannah is thankfully non-bimboish, un-screamy and mostly sensible, unlike practically every other shrill and annoying buxom sidekick that casting agents keep churning through.

The fantasy world in the film is as eye-catching as it is impossible, though the CGI effort here couldn’t hang with the Avatar big boys and the afore-mentioned fly-trap attack is actually pretty lousy.

As the target audience of these flicks consists largely of diminutive people who boast a pen license instead of a driver’s licence I must assume anyone reading this is either an adult wondering if this is an adult film, or an adult wondering if this might suit their kids. To the former I say a resounding ‘No’, there isn’t much here to satiate a mature cinematic appetite, to the latter I say give this Journey a try. It is bright, fast paced and distracting, with nothing especially scary or mean spirited and a refreshing lack of negativity.

Plus it has dinosaurs…

It also has an annoying teen evolving into a semi-likable young adult before our very eyes. Which might be the most fanciful element in the entire film.

Final Rating – 7 / 10. Joins The Goonies and Super 8 as lightweight yet viable alternatives to the post-Pixar set.