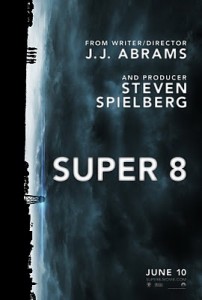 It’s actually a pretty cool poster, but you really have to look at it.

I knew nothing about Super 8 going in aside from the trailer, that JJ Abrams made it and that Steven Spielberg was somehow involved. Since watching the film I have seen a JJ Abrams interview and read a review that totally gave a major plot development away.

I will try not to do that here, as I think I would be pretty pissed if someone gave away such information prior to me watching it…

Super 8 is set on the cusp of the 80s in a small town in the United States named Lillian. In the opening moments we can see that there has been an accident in a local steel mill, moments later we learn it was the mother of Joe, a local boy (I would say ‘teen’ but he is really still a ‘boy’).

With the summer break arriving and both Joe and his policeman father still coming to grips with the unexpected passing, Dad thinks Joe would be well served spending his free time at a youth camp.

Joe decides he’d rather commit his summer to helping his portly budding director chum as he finishes up his homemade zombie opus. Joe will be on makeup and special effects duties.

So unbeknownst to Dad, Joe and five other local kids head off in the late evening to complete some scenes, the unexpected inclusion of young Alice only sweetens the deal for Joe…

When the filming of the first big scene of the night is interrupted by a massive train crash that occurs within metres of the ‘set’, the course of the entire summer is instantly changed. And probably their lives… whatever.

I might digress here by saying that the train crash is so spectacular and action packed that it seems determined to subvert the very laws of science and nature. For almost two minutes after the initial impact carriages and debris are still hurtling about the place, always perilously close to one kid or another.

But with no-one hurt (!) the shaken sextet gather up their stuff and head home hoping that the approaching vehicles saw them, and more importantly that their parents were aware that they were even out of the house.

The train wreck is understandably all over the news the next day in Lillian, but the kids swear that they will not tell a soul that they were there, nor that they saw one of their teachers at the scene and strongly suspect he had something to do with it.

I’ll leave the exposition there, but can inform you that the how/why/what/where and who’s? are all answered in the ensuing hour or so.

The secret to enjoying Super 8 to the fullest is understanding what it is aiming to be. In my opinion this is a film that aspires to be a 21st Century equivalent to The Goonies, a light, fun and most of all non-confrontational film for kids.

Super 8 is perhaps less focussed, less creative than The Goonies, and features many big explosions and other noisy distractions near the end, but it has no real violence nor truly scary scenes, and no sex or profanity to speak of.

Like The Goonies it isn’t really that hilarious or even action packed, but it moves along at a swift pace and never causes you to check your watch or even look away. Super 8 is hardly Die Hard, The Last Boy Scout, Bad Boys or even Aliens, but you could do a lot worse. (And I didn’t name Bad Boys because I think it is good… I don’t.)

Final Rating – 7 / 10. An action film with ‘other’ elements to keep the younger lads content, with a sort-of romantic subplot building to make sure the girls don’t leave.

I’d much rather lil Billy n Bessie spent a couple hours watching Super 8 than the latest Saw knock-off… or Saw itself for that matter.