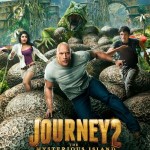 I don’t understand how photoshop hasn’t improved in years.

The opening sequence in Journey 2: The Mysterious Island, has a ‘rebellious teen’ on the run with several authority figures in pursuit. My first thought was ‘not another annoying kid’, then The Rock shows up to collect his stepkid and I realised ‘wait, it’s the exact same one from the first film!’ only surlier and somehow even more obnoxious.

Wasn’t that kid supposed to be excited, revitalised and a damn sight more mature after all the adventures just a few years back? Should it bother me that he regressed so very quickly just because he didn’t get another massive overseas adventure holiday for three whole years? The only rational explanation I can give is that his deep voiced uncle white-anted his love interest and shot through with her, leaving Shaun to wallow in self pity and resort to old ways.

Shaun finally spills the beans when The Rock… I mean Hank… notices that his entire room is plastered with Jules Verne literature, maps and excerpts, while Shaun himself studies codes and references of his novels. Great (step) parenting Rock.

It seems that the duo should have teamed up a lot sooner though, once Hank’s code cracking abilities solve the unsolvable riddle that leads to the location of the titular island in three minutes flat. A mere five minutes and a phone call later – two tix to Mysterious Island please – and they are cadging a lift with Polynesian locals Kailani (Vanessa Hudgens) and her Dad (Luis Guzman). And if that ain’t all  only five further minutes are required (along with a big mysterious storm) and before you can scream ‘young people have short attention spans!’ they’re on the shore of an island.

(And it’s only 20 minutes since the opening credits rolled. I have hardly dented the first litre of my 6 litre medium Coke yet.)

Of course the island is where it’s at. It looks like a Lewis Carroll brain-vomit after a late night brainstorming and drinking session with Dr Seuss. Bright lurid colours abound, the vegetation is lush and pretty and the fauna suitably wacky in that big things are small and large things big – at least when compared with what the visitors are used to. Put another way, it’s not every day you find an adorable pocket sized elephant, nor are you usually attacked by a Brontosaurus sized gecko all that frequently. Yet both of those things happen within another couple of distraction-defying minutes.

Can they keep the pace up? Well let’s just say Michael Caine gets to ride around on a giant bee not long after…

Living on this Mysterious Island must be like some kind of reverse ‘Honey I shrunk the Kids’ universe, where insects and animals that normally stand shoelace high are suddenly major threats to your existence, regardless of how many bright berries the Rock can bounce off his man-boobs…

You’ll have to see the film to understand that one.

Rock is indeed an upgrade from deep voiced yet personality-free Brendan Fraser, but we all know that it is the special effects that are the real stars here. The real challenge for the film-makers is deciding on which classic films to rip scenes from, so we have *COUGH* homages to Aliens and King Kong, and the Return of the Jedi ‘Speederbike’ chase scene. On bee-back.

Although altogether too reminiscent to the first film Journey 2 is once again harmless and fast moving fun. The problem is that in pandering to a younger demographic with bright colours, quick cuts and no scenes lasting longer than a few minutes, there is nothing that has any real impact or stubbornly lodges itself in the memory bank.

Final rating – 6 / 10. A live action animated film, this is the full length equivalent of Doug the Dog’s life (from the Pixar classic ‘Up’), a well meaning, good natured companion that is little immature and too easily distracted…

The inevitable two-pack DVD that will be released later this year with both films will therefore be a cumulative three hour distraction, an eye-popping ear bleeding 3D extravaganza of movement and distraction to be consumed (and for the older generation) endured rather than savoured and celebrated.