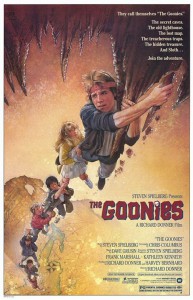 Classic poster… See what Photoshop has cost us!

I guess if Evil Dead gets 37 different DVD releases and practically every film released in the last decade has three or four versions on sale,  it’s only fair that The Goonies gets a special 25th anniversary edition DVD release. After all this teen Indiana Jones featuring the pre-pubescent Breakfast Club holds a similar place for as many 30 somethings as Stand By Me does, and like Stand By Me this film holds up remarkably well.

If you were going to make a movie that appeals to teenage boys what do you think you might put in it? 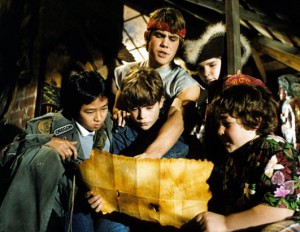 How about all of the above? The Goonies are four pre-teen buddies with clever nicknames that also serve to explain more about them than 15 minutes of exposition would:

The first prison escape and ensuing car chase neatly intros every principal character that will appear in the film within an entertaining 5 minutes. Clever stuff really.

After a couple more rambunctious pre-teen conversations – and a plot device that finds them with the desperate need to find big cash quick or their house will be foreclosed to make way for a golf course – the boys unexpectedly come across what appears to be a pirate’s treasure map from 1632, made by the renowned local pirate One Eyed Willie (aren’t they all?).

So the four Goonies, along with Mike’s older brother Brandon (Josh Brolin… Yep No Country for Old Men himself) and his cheerleader target of (PG13) conquest Andie and her buddy Steph unwittingly along for the ride; off everyone goes for an adventure.

To ramp up the action a notch further the local crime family the Fratellis are injected into proceedings so that they might pose a threat by staying one step behind the kids at all times. Don’t worry kids, the Fratellis are an old Mum and her two boneheaded sons, no-one gets hurt and there is never any serious peril or danger.

With all the major players identified and in play the hunt leads all and sundry into a vast underground series of caves and tunnels, with booby traps and dangerous terrain all around, the traps were lain by the late Mr Willie who it was alleged would rather die wealthy than spread his booty around… unlike Jessica Simpson – who will only die wealthy… 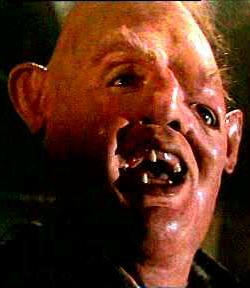 Each Goonie gets their respective chance to shine as they come across each new obstacle or elaborate puzzle, the girls are their to provide love and lust interests and to shriek when the situation demands – and if all that isn’t enough a fourth “forgotten” Fratelli, the hideously disfigured ogre-ish Sloth pops his magnificently unique lump head into the fray… Again don’t worry he’s not a bad hideously disfigured, massively muscled ogre, he’s a good guy (great 80s makeup job though!).

Everyone learns something from the experience, there is some immensely entertaining action sequences and the whole thing is as light and realistic as a Miss Universe contestant, thankfully it makes more sense though.

What sets Goonies apart is the little touches, despite the large number of characters in the group everyone is distinctly different, but aside from just the broad strokes mentioned above there are little touches that lend further human qualities to the boys that go beyond mere caricature – the asthma inhaler, the inventions, the clumsiness and strange stories – they all help.

The plot is necessarily preposterous at all times, everything is skewed towards fun and escapism, and as mentioned previously this has been purpose built to entertain, amuse and inspire young boys – just like Britney Spears. That’s three pop-culture potshots at obvious targets in one review – my parents must be so proud!

Final Rating – 7.5 / 10. As with many things The Goonies all appears effortless and straightforward, but as we should know it takes a lot of effort and planning to make things look this easy, even then this has the added bonus of being consistently fun and engaging. There’s a reason this has an audience 25 years on when Due Date will be forgotten in 25 days.