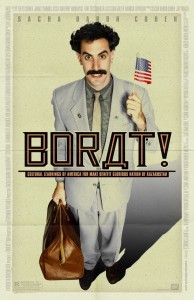 We made the inevitable decision to check out Bruno the other night, even though with these films the trailer often has the more memorable bits anyway. My wife mentioned we should check out Borat in the nights before heading to the cinema, I said I don’t own it but I’ll rent it from the store. She was amazed and asked why I didn’t have the original, given that I apparently have a taste in weird comedy and should absolutely love it.

This is partially, even mostly, correct, and I struggle to explain rationally why I don’t own Borat and don’t really have the intention of buying Bruno down the track now that I have seen it. Especially coming from the guy who proudly owns Muppets From Space, Hudson Hawk and The Ladies Man already.

I loved Da Ali G Show, bought him Indahouse and own a couple of Ali G Show DVDs, one of which heavily features Borat in several hilarious bits, so why the change of heart? I’m not sure, but when pressed (by myself) I admit that I enjoy the concept more than the films, and I felt uncomfortable knowing that Sacha Baron Cohen was manipulating what were often good and innocent people so that they would feel themselves uncomfortable and unsure of themselves. yes it showed that Americans are often critical, unthinking and hypocritical idiots, but surely by now that is shooting fish in a barrel.

So since cheking it out the first time I never bothered with it again.

I certainly admire Sacha Baron Cohen, in any of his Ali G Show incantations he never varied from character and directed the chats back to where he wanted them to go regardless of the interviewee’s intent, but when things did go astray his ability to work and ad-lib on the fly was nothing less than incredible. Even in Borat guise, he apparently remained in character at all times to keep sharp and was so focussed on keeping things authentic that he never washed the Borat suit, and those that have seen the film know that there is only one outfit that he wears in what must have been a multiple week shoot.

The Borat plot is irrelevant, a Kazakhstani reporter goes to the United States with the intent of making a documentary on US customs, only he gets sidetracked by an episode of Baywatch and decides his new goal is to marry Pamela Anderson, (if he had chosen Paris Hilton it would have been a fait accompli). The laughs come from both Borat’s view of society, gender relations and his lack of political correctness (all of which pissed off the Kazakh people who rightfully thought that the less intelligent viewer might swallow the shtick lock, stock and barrel), and from the reactions of the unwitting Americans who feel they are being interviewed by a clueless hack and open up to their true attitudes.

There are a million quotables in the film, most of them involving the society taboos of incest, rape and bestiality, among others. Again this elicits the shock response from well meaning people, but more disturbingly it signals to those with less than pure thoughts to go nuts and espouse their own ridiculous ideas. An example comes where Borat asks a car dealer how fast a car needs to go to kill Jews, and the dealer calmly gives not only a blank stare, but a thought out answer!

I think realistically if anyone takes offense at what Borat says, they shouldn’t be watching the film in the first place, or they at least didn’t see the preview. It is the responses that should trouble society, as so many interviewees casually toss out racist and homophobic comments with precious little prompting, only because they thought it would never be seen.

Borat has been criticised for being largely set up, and the scene with Pamela Anderson is clearly a set up. The scenes involving the rodeo organiser, the car dealer, driving instructor and idiot college kids must embarrass the participants and anyone ever associated with them. The college kids in particular earn the right to be publicly shamed, (thanks to Anthony, Justin and David’s parents!)

I won’t go into any other scenes here, the movie is only 80 minutes and watching it is almost as quick as reading this. In essence I feel the charm of Borat is that he is largely ego-less and ignorant, his naivity is endearing to those he comes across, so their attempts to help are endearing, which is why I feel awkward watching them get screwed over. 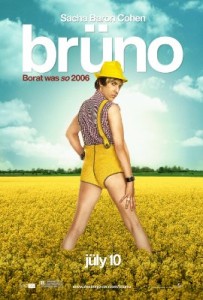 Where Borat was gormless and ignorantly charming, Bruno is calculated and ruthlessly seeking publicity. This is as I see it the key difference and the primarydrawback of the film, at least when compared with Borat.

This leads to a situation where Bruno attacks the superficial and those lacking intelligence, in other words the easy targets.

Look at these attacks:

– Models are stupid and vacuous.
– People in the film industry are judgemental.
– Californian women are superficial and dumb.
– People from the Southern states of the US are homophobic and largely uneducated.

This is the equivalent of saying that George Bush is stupid, politicians are corrupt and (up until recently) you wouldn’t want Michael Jackson babysitting your kids. For some reason he is now a saint again in death.

The best laughs in Bruno happen where he pushes himself into situations far beyond what the ordinary citizen would deem out there. There is a seance that really must be seen once, then hopefully forgotten, a sight gag on Bruno’s pilot that is at once gross and ludicrously hilarious, a failed bondage session and a finale that I think petered out simply because (being heterosexual) Baron Cohen couldn’t bring himself to go further. Don’t get me wrong, I fully understand boundaries, but if you really want to push the boundaries the next illogical step is to go the whole hog (so to speak). To paraphrase Tropic Thunder: Bruno goes half gay, instead of full gay, except this is exactly where the audience can tell that they are watching a button pushing film, instead of a no holds barred film.

I have no idea why I just wrote a paragraph suggesting that a film should be more gay, but there you go. If you got this far you know you are going to watch it anyway, and I would never say not to, but this is an exercise in creating controversy, and not the classic mock doc that some might lead you to believe.

Final Rating – 6.5 / 10. Again mercifully only 80 minutes, but this time in between the bits you’ll talk about at work are prolonged segments of boredom totalling around 70 minutes. I looked at my watch way too much for it to be healthy.

Verdict – Ultimately I found my experiences watching Borat and Bruno almost back to back, I have decided that the films are much like the principal characters.

Borat is dumb yet likeable. Bruno is dumb, vacuous and simply tries to hard in the end. Also, Sacha Baron Cohen is a victim of himself, after Borat, it’s been done.