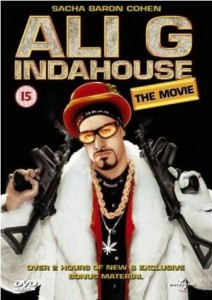 Forget Will Ferrell and the Judd Apatow school of improv where actors get 5 and 6 goes at coming up with various punchlines in scenes (Ferrell usually makes his “hilarious” by yelling them out for no reason), try it unscripted and on the fly with a non-actor who may or may not punch you depending on their mood.

To that end I fully recognise that Sacha Baron Cohen is an improv genius, Borat and Bruno both proved that beyond doubt. (He was also the funniest thing in Madagascar 1 or 2 by far.) But the first character to bring him notoriety was Ali G, the wannabe black gangster-pimp who is actually a middle class white boy from Britain.

Perhaps it is because a lot of his comedy comes from shock value but I rarely choose to revisit the Bruno or Borat movies, they are far less cringe-worthy the second time round, and I was pretty surprised to find that this film had aged so poorly as I remembered it as a near classic.

Ali G Indahouse opens with the best scene in the film, a dream sequence that sees Ali in his “natural habitat”, the Los Angeles mean streets, surrounded by bitches and beset on all sides by hard core playas determined to do him harm. Of course he pulls out his gat (or equivalent) and busts many caps indeed.

Cut to real life, Ali is actually a suburban dwelling gangsta-by-choice, with a similar posse of tossers (including Martin Freeman) in tow. They wear all yellow. Their nemesis gang is the East Staines Massive who wear blue and are equally (not) hard.

When the local government closes down the local recreation centre Ali decides to protest to keep it open. Fortunately the Deputy Prime Minister (Charles Dance) sees an opportunity to submarine the Prime Minister’s (Michael Gambon) standing and promptly announced that Ali G will be running for parliament in the local by-election.

Ali’s campaigning does not go well at all but a monumental gaffe in a televised debate by his opponent helps Ali become an unexpected success.

Once in parliament the continually ludicrously dressed Ali and his similarly ridiculous boasting are taken as the voice of a generation and he promptly joins the cabinet and becomes the PM’s go-to guy on all policy matters.

After brokering a peace treaty by utilising tea laced with natural ‘erbs Ali G is sacked, and the PM resigns when a tape of Ali boning his missus is released.

Of course Ali must break into the new PM’s office and fix shit.

Maybe I’m ten years older and this just isn’t as funny anymore, maybe it never really was. There are more chuckles in this than many other comedies, the recent Get him to the Greek and Date Night included, but no side-splitting moments of comedic brilliance.

There is a funny sms joke near the end and Charles Dance proves himself to be a good sport, but without the “this is real” edge supplied by Borat and Bruno this seems a little too try-hard.

I firmly believe though that Sacha Baron Cohen will make two or three truly brilliant comedies in years to come.

Final Rating – 6.5 / 10. It is telling that the two scenes with almost no relevance to the main plot are the funniest, that being the first 5 minutes and the last 5.