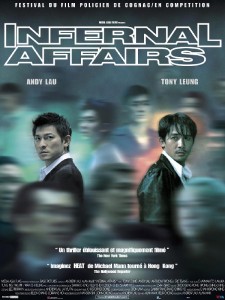 For years I was told by a mate “You watch foreign films (I think he actually said “anything“), you need to check out Infernal Affairs”. Then of course not long after the American remake was announced, which I went and watched and enjoyed, much to the distress of said friend. What is it with people who normally have no preference in films, unless they feel they discovered the one they keep recommending, I know I harp on way more about Session 9 lately than almost anything else going around, and I’ve seen Drag Me To Hell, The Hangover and Bruno, all of which are worthy of discussion at some level.

Anyway I was actually looking for A Better Tomorrow in the Asian film section of the video shop (nowhere to be found as usual), so when I came across this I thought “why not”?

The verdict, speaking frankly, is that if you’ve seen either The Departed or Infernal Affairs you don’t really need to see the other. They are so similar in plot that I knew exactly what was coming up most of the time, and both are quite good films. I can only compare it to a musician releasing an album of original work, and another equally talented taking the album and faithfully remaking it just with their instruments and voice, there was no real point but most consumers would likely embrace the first version they heard. Put briefly The Departed is very far removed from the shot for shot “Psycho” remake.

But this isn’t a The Departed review.

Infernal Affairs is set in Hong Kong, and opens with an induction of sorts. A group of police cadets are briefly introduced and then almost immediately we cut to about 10 years later, when one of the more promising cadets Yan has been expelled from the force and works in the Chinese underground crime world. (We know it is 10 years later because he has grown a moustache!) The best remaining cadet has enjoyed a solid and decorated career and has advanced to the rank of Inspector, his name is Lau.

Now here’s the hook, and without this there really isn’t a film. The criminal guy (Yan) is actually a good guy who is working undercover for the Police and answers to only one member of the force, the expulsion was just to cover his exit and justify him turning to crime. And Inspector Lau is actually a crooked cop who filters information to a local gangland Boss called Sam, who happens to be Yan’s employer of sorts.

So there we have it, duelling “rats”, one of them a good-bad guy, and the other a bad-good guy. It is an intriguing concept and the filmmakers utilise it well so that frequently we feel that they will finally meet or one will catch the other, but it is never kept that simple.

The crisis point is when an international drug deal goes bad as both stoolies try to inform their respective links and understandably things get very confusing for both the police and the criminals, both who feel they should have the inside scoop but are continually being second guessed by the enemy. It becomes evident to both “Bosses” that there is a mole working for them, and as they each know that they already have a man on the inside, they sic their respective rat to find their counterpart.

Confused yet? It is actually paced well so that you can track the action pretty well.

But it goes further, Inspector Lau is actually called in to work for the Internal Affairs department, in essence to look for himself, all the while as he is trying to use his contacts to track down Yan for gangland boss Sam.

In an attempt to catch Yan in a rendevous with the Police Chief, things go wrong and the Chief is killed. As he was the only link between Yan and the Police Yan is now in the unenviable position of extricating himself from a situation that no-one knows he is in but himself, as all the while the nets close in.

Does he do it? Well you’ll have to shill your $2 for the weekly, I will say it is worth the ride. There are strong visuals, the director has a pretty striking style and of course given the explanation above there are ingenious plot twists throughout. I was actually surprised as to how complete this film was, not that I am prejudiced against foreign films, far from it, but The Departed was frequently described as being a success due to Scorcese’s vision, not because it was a remake of an equally intricate work.

As far as the differences between this and The Departed, there are subtle differences but more because The Departed was a 150+ minute beast and Infernal Affairs is a lean mean 90 odd. The Departed took what I would argue were minor subplots in the HK original and expanded them so that they became more a part of the remake, but from memory none of them added greatly to the finished film. There were some more memorable characters in The Departed, aside from the gang boss Sam no-one stands out from Yan as a solid character, but that could be as much about me having to read their dialogue on the screen as a foreign viewer and not really “getting” any difference or power in their performance.

This was followed by a couple of sequels that I am yet to see, but I may look up in coming months. I would be interested in seeing how they could incorporate the final scenes into any follow up.

Final Rating – 7.5 / 10. If you love The Departed, this is so similar that it is unlikely to sway you, but if have seen neither and like foreign films this is a solid one with an intricate but worthwhile plot. Patience and attention will be rewarded.