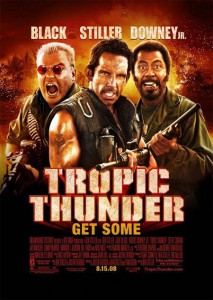 When Ben Stiller writes and makes his own stuff it works out well, Zoolander being a prime example. When he works as an actor for hire the results are far more patchy.

Thankfully a couple years ago Stiller had a brainwave that he managed to turn into Tropic Thunder, and while it isn’t quite at the level of Zoolander it holds up very well.

Stiller’s directing style is quite odd, his films tend to be almost overstuffed with peripheral characters and short scenes that don’t seem to move the plot forward that much, thankfully to date this has not clogged his films up too much, but it might be more noticeable in less funny films.

In Zoolander Stiller poked fun at celebrity, the public’s obsession with appearances, how clueless the people in front of the camera were, and how easy they were to manipulate. Tropic Thunder might seem like a very different film but in essence it is basically poking fun at actors, how clueless and self absorbed they actually are, and how easily they are manipulated by power brokers behind the scenes.

A massive nameless Hollywood production company is making another Vietnam War movie in the same vein as Platoon and Hamburger Hill, the opening scenes show a pretty close approximation to what anyone who has seen a couple of those movies is used to. Lotsa bullets, explosions and rough and tough soldiers opening up on the “damn VC”. The film plans to tell the “true story” of a small group of soldiers fighting against seemingly insurmountable odds, and was penned by one of the survivors named Four-Leaf Tayback (Nick Nolte), who lost his hands in the war, which must have made typing his memoirs an absolute bitch.

The film is extremely big-budget, but it is also running behind time and over-budget even in the early stages. The rookie director Damian Cockburn (Steve Coogan) is having trouble juggling egos and unwanted ideas from his cast of coddled prima-donnas and the bumbling of many of his staff, on top of this he has the studio bosses breathing down his neck in the form of Les Grossman (Tom Cruise), a loud and obnoxious power mad little man who demands results.

After a conversation with Four-Leaf Cockburn decides to shake things up and shoot the film guerrilla style, away from the luxuries and pampering that the film set offersto the night. So with a skeleton crew of basically 5 actors, Cockburn, Four-Leaf and an effects guy they take a helicopter into the deepest jungle.

Till now I haven’t mentioned the actors, so let’s run through the five key cast members:

1/ Tugg Speedman (Ben Stiller) – An action film star in the same vein as 80s Dolph Lundgren, basically a meathead with a few muscles who has built his name playing meatheads with muscles, as exampled by his film series Scorcher 1 through 5. To date Tugg’s main problems on set has been his inability to cry on film and a lack of Ti-Vo. Tropic Thunder is supposed to be Tugg’s big break into “serious acting” as his earlier attempt, a film where he played a special needs youth named Simple Jack, failed miserably. 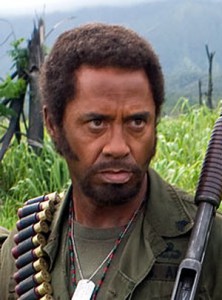 2/ Kirk Lazarus (Robert Downey Jr) – The “Actor’s actor”, multi-award winning and renowned for his method acting and masterful performances, Lazarus is a white guy from Australia who plays a black American guy in the film, (later in the film this results in a white American trying to fake an Australian accent while his appearance is that of a black American. If you follow me?) Lazarus goes as far as having his skin dyed black for the duration of the shoot and has adopted a rough African-American speech pattern and voice for the film regardless of whether the cameras are rolling or not. As Lazarus himself says he stays in character until he has completed the DVD commentary. (There’s a lot more than a hint of Russell Crowe in the role.)

3/ Jeff Portnoy (Jack Black) – To date a lowbrow comedian honing his craft with fart jokes and playing multiple characters on pointless yet somehow profitable franchises. Jeff is desperate to be taken seriously and has a serious problem with various illicit substances.

4/ Alpa Cino (Brandon T Jackson) – The token rapper that seems to be in every Cop show, movie or co-starring with Steven Seagal in some crap, Alpa is a cross-genre marketing expert who is making money by shilling his energy drink Booty Sweat and his chocolate bar that is equally tastefully named the Bust-A-Nut bar. Movies just represent another revenue stream and greater public awareness for him. As the only real black guy he also has some real problems with a white Australian getting the plum role that a black actor should get, especially when he never stops acting “black”.

5/ Kevin (Jay Baruchel) – Not much to say about this guy, he takes acting seriously as this is one of his first roles. He is amazed to be among other professional actors of such stature and equally amazed to see how fucked up they all are. He has learnt his lines, was the only one to go through a mock boot camp so he can read a map and look reasonably legit wading through the jungle with a weapon in his hands. He knows movies back to front and desperately wants the film to be a success, I guess os he too can indulge in his own ego and forget where he came from as the other 4 have.

Now once in the jungle things don’t go according to plan, after Cockburn gives the actors their brief and explains how hard things will be he promptly steps on a discarded land mine and explodes. The actors initially don’t know if it is real or a trick so they argue for a few minutes before deciding to press on. Unfortunately the explosion did not go unnoticed and the other locals in the area happen to be a vicious drug cartel hell bent on defending their turf.

When the drug gang attacks initially the actors go along with thinking it is simply another scene for the film, except one by one they realise that not all is well, except Lazarus who is 100% method 100% of the time.

The group’s fragile bonds fracture, Speedman wants to keep forging on and believes that the filming is still happening, Lazarus has no faith in Speedman and feels that they should all bail, and unfortunately Portnoy has run out of drugs and is going through withdrawal in a fairly inopportune place for someone who is having all sorts of visions and delusions. Each tries to convince the only sensible guy remaining, Kevin, to side with them.

After a discussion Speedman moves on alone leaving the other guys trying to work out where they are and how they can get back to the film set. 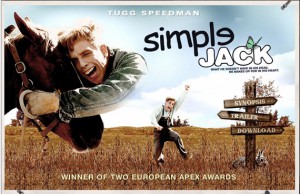 As you might expect Speedman does not cope very well by himself, and it doesn’t take long for him to be captured by the drug cartel, where he finds that the 13 year old leader of the gang (!) happens to be a big fan of his most maligned character Simple Jack. Initially this works in Tugg’s favour…

(For some reason a 13 year old trash-talking Asian druglord came and went with barely a whimper, let alone the toddler with a penchant for stabbing people to death! But Hit-Girl from Kick-Ass is a tragedy and sends a terrible message to our youth? Maybe if the 13 year old drug lord was a good clean white American boy the critics might be up in arms?)

The other 4 are hopelessly lost and attempting to cope with Portnoy’s painful withdrawal, they happen upon the drug gang’s settlement, spot Speedman and must devise a way to free him.

Meanwhile back in the US of A the production company have decisions of their own to make, whether to leave Speedman for dead and claim insurance for the entire botched film or to try to find him. In between is Speedman’s semi-loyal agent Rick Peck (Mathew McConaughey), who is initially steadfast but open to bribery.

The finale is well made and superior to many actual action films, there are perhaps too many jokes, or at least some of them fall flat, and the truth comes out regarding many of the combatants which in some cases is more unexpected than others.

The film isn’t overlong at a tick under two hours but could definitely use some trimming, the US production company scenes seem extraneous but I guess if you can get Tom Cruise to sacrifice his good looks you make the most of it! (Damn right I’m being sarcastic.)

All in all a very funny film with some excellent characters that are enhanced by the quality of the actors behind them, Robert Downey Jr earned justified praise for his Lazarus character, I just can’t help wondering how he would go with the drug-crazed Portnoy role, but that might be the bitch in me.

Tropic Thunder is by no stretch the best film ever but if you’re looking for a comedy with some solid action scenes you could do a hell of a lot worse. 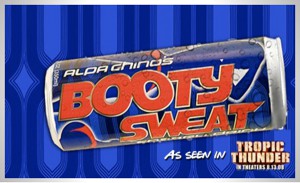 One of the fake products to go with the fake trailers.

P.S. I dunno if the beginning or end of the review suits more but just like the Grindhouse films there are some hilarious fake trailers and ads at the start of the film, and just like Grindhouse they are some of the best bits in the film.

Final Rating – 8 / 10. Stiller should stop being a monkey-boy actor for hire and stick to making his own films. They turn out so much better.