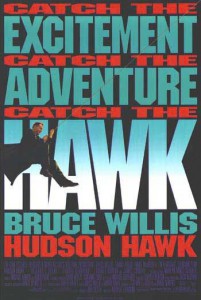 OK a minus for the lousy poster.

Here is a film unjustly panned. Sure it was never going to be an Oscar favourite or a critical darling given that much of the humour was quite abstract and that there were so many pratfalls, but c’mon it’s reasonably funny and likable if you don’t hate Bruce Willis in smirk-mode… 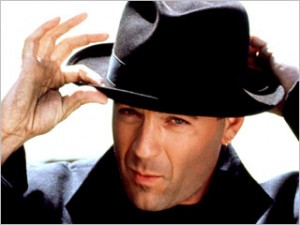 …Which he is from first frame to last as Hudson Hawk, the very last image you see is a freeze-frame of Willis tossing away a coffee cup with a half grin. But the 90 minutes preceding that had some good moments.

Hudson Hawk is a cat burglar of the highest calibre, who in true A Team style was framed for a crime and spent a great deal of time in prison. Upon release he decides in classic style to go straight along with his buddy Tommy (Danny Aiello) and run a bar/coffee shop in Joisey.

The duo are blackmailed into not once, not twice but thrice, each time the target is priceless artworks created by one Leonardo Da Vinci, and along the way Hawk and Tommy must ward off the unwelcome assistance or competition from the police, the mob, the shonky CIA, billionaire criminal nutjobs and the Vatican.

I can totally see how someone can see this film as mediocre, even below average and that’s fine everyone can have an opinion – as long as it’s mine.

So based upon a world first + / – system that I created just 3 minutes ago and have never tested or really though much about let’s see how Hudson Hawk fares under intense OGR scrutiny.

In essence the film starts at 0, neither good, nor bad. A + point helps and a minus obviously doesn’t. The key is as long as there are more good points than bad the movie is worth a look.

+          The sheer scope of the movie. A lightweight heist film with pratfalls, Three Stooges buffoonery and musical numbers? At least it tried.

–          A cheesy narrator, I later found out that he narrated a “classic” kid’s cartoon that I can’t remember. Why they thought this a hook or selling point I don’t know.

+         Reindeer-Goat cheese pizza. No idea what this is supposed to mean – don’t care. It’s just amusing. More amusing that Bruce has used it in other films for similarly pointless reasons.

–         OK, this only counts as one minutes but it must be said it’s a big one. Whoever thought that they should sing songs that are the same length as the supposed heist should be shot. A crappy throwaway joke about maybe getting a watch doesn’t cover this mess up.

We’re now 20 minutes into the film, I have laughed 0 times and we have a wash of a result 3 up, 3 down. Not looking good Brucey me-boy.

+         So we had a big minus in the first segment, here is the BIG +. Darwin and Minerva Mayflower enter the frame as eccentric billionaires who are behind everything. Richard E. Grant and Sandra Bernhard ham it up so much that you either have to laugh or turn off the film, I keep watching…

And now back to the action, Hudson Hawk is 1 up leading into the meaty section of the film.

+         The ambulance chase that occurs at the halfway point is both ridiculous and inane, but undeniably entertaining.

–         The CIA “candy bars”, all agents are code named after famous choccies, another quirk I could have done without.

+         Minerva Mayflower singing “I’ve got the power” again and again off key and off time, followed swiftly by Darwin Mayflower suggesting forcefully that he only desires “World domination”, complete with crazy arm movement and as I recall pelvic thrusting.

We’re now past the half way point, thankful to report a few laughs have arrived thanks to the Mayflowers, and that the pluses are 2 up entering the home stretch.

+         Good start, although the CIA candy bars hurt the team one among them provides partial redemption: Butterfinger. A huge man who looks like a big dumb NFL player (and probably was), always has a vacant expression and something similarly intelligent to say, though thankfully it is usually funny. He also has one of the weirder hairstyles in film and I’m not sure if it was meant to be that way or if it just hasn’t dated well. Butterfinger provided me with 5 laughs at least.

–         With the good comes the bad I’m afraid, David Caruso plays Kit-Kat, a silent guy who does strange things… things that probably only he, Willis and the director found amusing.

We’re in the home stretch now kids, Hawk is flying high 3 up.

+         Two solid jokes in two minutes… a third and you can officially claim a great comedy scene… alas that elusive third crack-up doesn’t arrive in time. No Ha-Ha Hat-Trick today.

+         It was mentioned previously but worth reminding that Sarah Bernhard is the fugliest thing ever, that’s actually a good thing in this film. So I don’t look too bias I’ll add the following line as a two-fer “I’ll torture you so slowly you’ll think it’s a career.”

+         Andie McDowell is likeable. There, I said it. Who would’ve thought? With this and Groundhog Day she is one of the least irritating model turned actresses ever, especially in comedy films where foe example people like Jennifer Aniston are considered “hilarious” when they bobble their head a little.

–         Too much convoluted hokiness in one stretch without good jokes, painful to watch…

–         Culminating in the just dumb fight between Hawk and bad CIA guy George Kaplan, which ends with Kaplan sending a flying kick over Hawk just as he bends over to pick up his hat.

+         Another great quotable (that I drag out frequently): “Why is the world jam packed with such IDIOTS!?!” You have to starts low and quiet and practically spit out IDIOTS through clenched teeth for it to work.

+         C’mon, a flying dog is never bad. Violence against animals and children is fun (as long as it is not realistic).

And that’s that. Wow 5 up, not a bad effort for what is too frequently viewed as a shitty film. Sure it has some bad points but if you can check your brain at the door there are laughs to be found, and if you can call a million other films dumb fun then why not this one?

In summation: Hudson Hawk aimed too high, it lacked focus and in the end – like a fat man having a heart attack it just had too much cheese and ham(ming). The songs were also the weakest point, but the same can be said for Mariah Carey albums – and she’s rich.

What Hawk has on the PLUS side are some terrific quotables, great bit-characters that went for broke and ended up redeeming the film, and some good jokes.

I understand that you might say you either get it or you don’t, but all-time turkey?

Final Rating – 7 / 10. Why is the world jam packed with such IDIOTS who think this movie is one of the worst in history? I can’t tell ya.