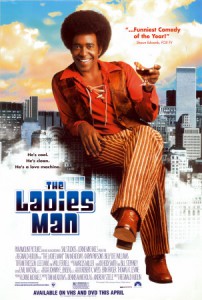 “Something is randomly happening right now… in my pants.”

Another Saturday Night Live project. If you get 4 minutes into the film and decide you don’t think that you like Leon Phelps you might as well stop. If you get that far and don’t smirk once DEFINITELY stop, it ain’t gonna change from here.

Leon Phelps is a radio talkback guy that can only exist in movies as he would never really get a job in the real world. He is a 70s throwback complete with a 1:2 scale Dr J afro and speaks with a heavy distinct lisp and a slow drawl in a wannabe erudite manner.

Leon gives ridiculously homophobic, sexist and outdated answers to the most straightforward of relationship based questions, and for some reason the callers are offended despite the fact that Leon ALWAYS gives similar, generally butt-related responses.

Leon’s producer is Julie Simmons who is likable but will always be the uppity daughter from Fresh Prince to me, she must field all the complaints and queries, and simultaneously ward off the angry station managers who constantly want to fire Leon.

When one manages to do so and Leon is turfed, we get a brief explanation of how he came to be (long story short he grew up in the Playboy mansion) and then move to his dingy local bar where we get to meet the regular clientele that Leon calls friends.

As Leon and Julie plot the next stage of their career we are informed that Leon not only talks the talk but humps the walk, he apparently has a string of “special ladies” all over the city, many of whom hate his guts. This has lead to a similar number of disgruntled husbands and partners who know Leon only from the smiley face tattoo on his derriere. I will not refer to this group again in favourable terms, suffice to say they include Will Ferrell and Lee Evans, two of the worst and overhyped comedic actors in recent history.

Leon has no job, no prospects and no regular missus. On top of this Julie has had enough of his lack of common sense and has temporarily scarpered. After delivering one of the better lines in any comedy film for two decades;

“There is nothing left to do. I’m going to have sex and wait for something to randomly happen.”

… something happens. Leon gets an unsigned letter where the female writer offers to share her life – and millions with Leon. He sets about finding his soul mate, leading to one of those montages Schneider specialises in where every meeting is apparently hilarious even though most of them aren’t.

Another case of the wrong guy chasing after the wrong lady even when everyone knows that the chick he is ignoring is Miss Right, don’t they do this in rom-coms about 75 times a year? That thought is also put on its head when he finally finds the chick and it is Tiffany-Amber Thiessen in her prime. In lingerie. Damnnnn, HELLO MISS WRONG!!!

The finale is cheesy and a little disappointing… (Ferrell & Evens feature), but mostly The Ladies Man is the story of a man out of touch with the real world, a man who lives in his own bubble of ignorance but is always totally honest and true to himself and what he believes in. Even if that is stupid.

Take out the wronged guys subplot and this movie is even better, but also about 40 minutes long, maybe this is a case of better left as a skit?

Final Rating – 7.5 / 10. Annoying sub-plots and cheesy finales aside, this is funny stuff in the main. I do like Leon Phelps.