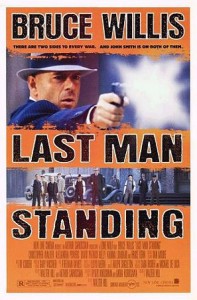 Not much rattles John Smith (Bruce Willis), he has the sort of unflappable self-confidence that requires not an absolute belief in one’s own abilities, but the misguided thought that one could control the uncontrollable.

Random gunfire, warring crime gangs and deceitful backstabbing women are not a concern to Mr Smith. Even when it seems that all three factors are conspiring to end his existence he doesn’t feel that the combined threat even warrants a facial expression. Were he wearing a heart rate monitor I am sure the testers might remove it after gun battles to see if it was turned on.

So when John Smith wanders casually into Jericho, Texas in his 1920s jalopy looking for whisky and a map, only to find desolation, despair and death, he sees opportunity.

Quite the optimist for a guy without a pulse.

The rival gangs that wrestle for control of the town are lead by an Irish guy named Doyle (David Patrick Kelly) and a slick group of Italians lead by Strozzi. The precious few other citizens of Jericho include an apathetic sheriff (Bruce Dern) who could care less as long as the violence remains within certain parameters, various hookers, a saloon owner – who runs a perpetually empty saloon – and an undertaker for whom business is booming.

And over the coming days it’ll only get better.

Smith is immediately ‘noticed’ upon arriving in town and when the initial intimidation tactics fail he is headhunted for a new vacancy in the Doyle gang. The Strozzi gang gets wind and decides the new gun must work for them.

Smith doesn’t care who he works for as long as the cheque clears, and he spends a considerable amount of time alternating between siding with – and blowing away – employees on both sides in gloriously exaggerated fashion.

Take one scene for example where Smith visits a local ‘working girl’ and midway through ‘festivities’ he is thrown headlong into a gun fight with several heavily armed bad guys. After pulling two pistols – I don’t want to know where from –in the span of a few seconds a buck-nekkid Smith takes down his assailants in a hail of bullets, as if this isn’t the oddest thing to happen that day…

As the body count piles up and tensions rise it is obvious that Smith will eventually have to either choose a side or simply take both gangs down personally. For the main part the film is generally reasonably quiet, only punctuated by dialogue so dry that the actors cough dust and insanely loud gunfire from handguns that seemingly never run out of bullets. 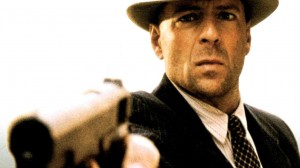 Bruce maintains the same squint and set jaw throughout the entire film. If he divided his paypacket by lines of dialogue or facial expressions then his salary would be the highest in film history this side of Holly Hunter in The Piano, who might I remind you was mute.

Christopher Walken also appears as the menacingly homicidal and universally feared Hickey, the only guy in town with a machine gun and Doyle’s right hand man, and as always he takes every opportunity to chew up the scenery and in this case blow a lot of it away.

The finale is both preposterous and a little confusing, but then again that is to be expected where on more than one occasion one man with two guns can take down a roomful of trained gunmen before they can even raise their own weapons.

Despite the simplicity and illogical elements I liked Last Man Standing. Bruce once again played the underdog only this time with little doubt that he would emerge victorious, even though he gets the living crap kicked out of him a couple times, and the well directed action sequences are in the main bloodless and suitably gymnastic, with the recipients of some of the many bullets seemingly propelled dozens of metres backwards and flipping over an over again seconds after being shot.

Special mention too to the quiet, quiet, quiet, LOUD dirty blues that serves as the score here, it was both familiar but a different approach to the usual action movie backdrop.

Final Rating – 7 / 10. Bruce Willis was hardly breaking new ground when he agreed to do this, but at the same time director Walter Hill managed to make what could have easily been a formulaic action film into something at least worth watching.