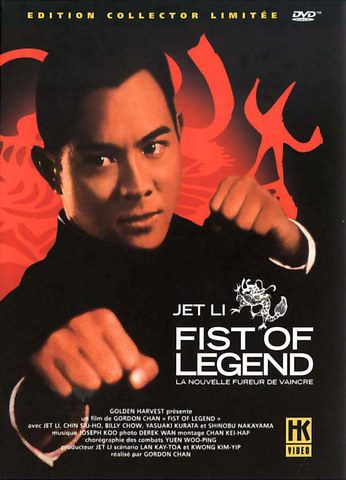 With most martial arts films the plot is merely an afterthought, simply a justification to get Jackie/Bruce/Jet/Tony from one battle to another as quickly as possible before he fights the big bad guy at the end.

The difference between “most” martial arts films and Fist of Legend is that the plot here is quite good. But all that aside it is the awesomeness of the fight scenes that elevate this above far more than just “most”.

Fist of Legend is the best non-Jackie Chan martial arts film EVER – and in fact is better than many of Jackie’s efforts.

Jet Li plays Chen Zhen, a noble young man who trained under his wise Hou Ting-An, a man who he idolized and taught him everything he knows – which as the film will later prove is a fuck of a lot.

When Chen Zhen discovers that Hou Ting-An has been killed in a martial arts contest he immediately travels back to pay his respects and investigate the occurrence… as there’s no way yo’ Daddy can beat up my Daddy!

Upon his return he finds all is under the thumb of the Japanese who seem determined to repress and undermine any signs of Chinese power – and it turns out that Hou Ting-An was killed in a battle with a Japanese fighter.

Chen Zhen has no problem with the Japanese, in fact his own missus Mitsuko is Japanese herself, but Chen Zhen follows a code of honour that dictates all must be above board and fair – and he feels that the death of his master is most un-codely…

He promptly exhumes his Master’s corpse and immediately realizes that someone has been playing funny buggers and that his Master’s death wasn’t a simple dueling accident. He confirms his suspicions by smacking the piss out of the Japanese soldier allegedly responsible for the death – if he can take him out so easily then his Master couldn’t possibly have struggled. 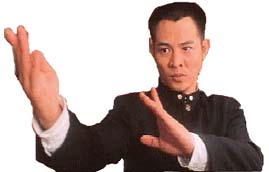 Even his hair could beat you up.

What follows is an hour plus of generally hand to hand stoushes with the Japanese army, their best and biggest martial artists (and I mean biggest – one guy is a tower compared to little Jet), even Mitsuko’s uncle gets into the act in a great fight scene.

It’s hard to describe and compare fight scenes without resorting to teen-speak and using descriptors like “awesome” and “super-cool”, but the awesomely super-cool fights and acts of physical strength and agility in Fist of Legend are simply wicked eh!

Jet is at the peak of his substantial powers, a training sequence boggles the mind and his quickness and athleticism are remarkable even if they were wire assisted, (and if they were wire-assisted it is thankfully done so well that it is not distracting). He has a couple of incredible one on one fights that are staged so well and filmed so that we can actually see the action – and not just blurs and smudged punches – and there are a couple of one on many fights that showcase his breathtaking timing without appearing to be a bunch of guys taking turns waiting to get fake-hit.

Again just writing superlatives doesn’t always do a film justice, Fist of Legend takes the original Bruce Lee source material and builds around it to create one of the greatest and underappreciated martial arts films of all time.

Jet Li might not have been as physically impressive or charismatic as Bruce Lee (not far behind though), but on this occasion he was involved in a film that trumped everything the revered Mr Lee did in his all too brief cinematic career.