Kiss of the Dragon (Review) 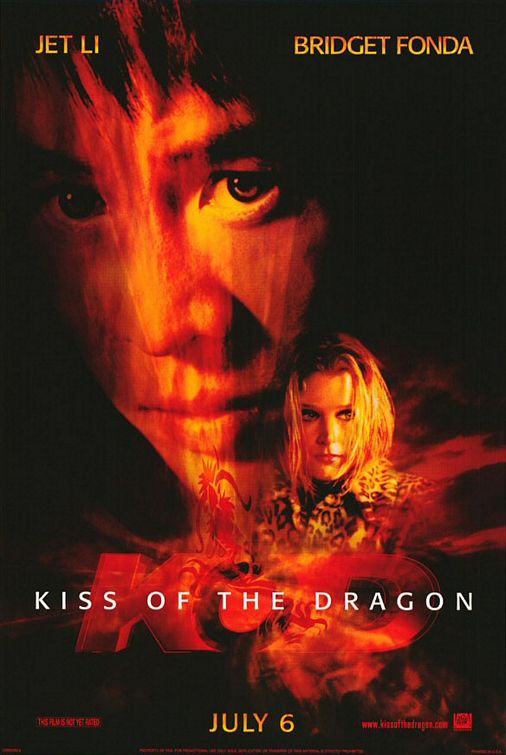 Look the back of the KOTD DVD cover might sound the same as a million cheap martial arts B flicks:

Jet Li is a Chinese Secret Service agent, when sold out and betrayed by his French allies and framed for a crime he didn’t commit he goes underground, only returning to clear his name and defend the honour of a poor unfortunate prostitute with a heart of gold whose daughter is being held hostage by the evil French Police Chief who terrorises them both.

… and in reality it pretty much is the same. But KOTD is different, different in that it has no less than 5 scenes that could rightfully called classics. So rather than go through the standard *yawn* plot and say what a good guy Jet is and how hard done by Bridget Fonda is as the hooker, I’ll explain why you REALLY NEED to see this movie if you are even a passing fan of martial arts flicks.

Reason # 1: Jet – nicknamed Johnny in the film – objects to some nasty stuff the corrupt French cops are doing… they decide to kill and frame him in that order. The ensuing flight, pursuit and ongoing battle makes the film worthwhile and we’re only 15 odd minutes in.

With much more to come.

Reason # 2: Now on the lam Johnny organises a secret rendezvouz with a friend and countryman to devise an escape plan. Obviously this goes awry and there is a desperate fight on a ferry that goes for a few minutes. A similar scene might be the highlight of many modern day martial arts films, in KOTD it is the least special.

Reason # 3: Johnny is lying low while he recovers from the wounds sustained – so far. After standing up for Fonda’s hooker character a shitstorm erupts when her pimp and associated nefarious dudes step in. The best part of this fight is a great standoff between Johnny and a towering muscular black guy, but the bit you’ll remember most is how Johnny is able to finish the fight with a set of chopsticks.

OK then. Johnny embarks on a brief rescue mission, taking on two similar looking and equally formidable foes in the process. The fight is great and the concluding move especially cool, but this is merely a brief prelude to… 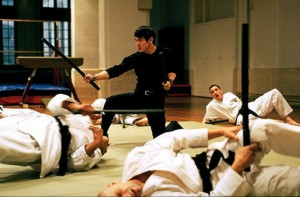 Reason # 5: Johnny decides to stop all this running stuff and confronts his problem head on, by walking into the French Police HQ and taking down everyone – and I mean EVERYONE – in one scene he accidentally gatecrashes a martial arts training session and gives the students an impromptu lesson in just how far they all have to go… all at once.

Reason # 6: While the Kiss of the Dragon element is a little hokey (not to be spoiled here), the implementation of the move itself is extremely memorable and immensely satisfying. While he doesn’t get his own “reason” the lead bad guy – an over the top and incredibly shady cop named Richard – deserves everything that he gets, and he is easily one of the more reprehensible bad guys in recent cinema.

Kiss of the Dragon was my first DVD purchase, bought months before I actually had a DVD player. Most martial arts films aim for one or two scenes that might warrant a “classic” description. This film has no less than 5.

Final Rating – 9 / 10. Awesome stuff that makes me struggle with the reality that Jet Li decided that films like The One, Romeo Must Die and Cradle 2 the Grave were where he belonged.