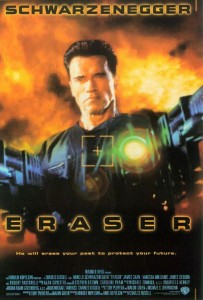 Arnie’s career was really losing steam by the time Eraser came around. After all he’d played every role that suited him, often multiple times. The robot. The soldier. The cop. The special agent. The ummm… barbarian.

And believe it or not, as imdb is my witness, he played ALL of those characters more than once by this time, the only difference sometimes being the Eastern European country he was supposed to have come from.

So by this stage Schwarzenegger was sorta grasping at straws, the result often being awful and often recycled projects that played with his image and in desperation introduced more and more illogical and ridiculous hooks and sequences.

Take Eraser, where the bad guys have heat detecting scopes on their RAY GUNS(!) that go bing-bing-bing and cut through anything in their path, and Arnie gets to kill a 90s style CGI alligator and after consigning it to its fate declares it ‘luggage’. (You know what? That bit still makes me laugh.)

Arnie plays John Kruger, a guy who doesn’t officially exist, whose specialty is making it look like people in need of protection don’t exist to keep them safe from various nefarious high-ups and/or low lives. Hence the ‘erasing’ reference of the title, he erases them from being… mostly without even killing them!

This time however the case is a young employee who is a key witness against a Big (evil) Corporation that is illegally making the naughty bing-bing-bing weapons.

“Geez not this again!”

Eraser actually sports a fairly string cast of mainly James’; Coburn, Caan and Cromwell all get turns at being bad guys or Arnie’s superiors… or both. And Vanessa Williams is the damsel in distress in need of the protection only Arnie’s big gun could give.

The rest of the film is a series of carefully conceived yet palpably ridiculous action setpieces that are technically proficient but lack any sense of true action goodness. The plane escape sequence is fine, the zoo chase scene OK (featuring the afore-mentioned luggage) and the finale at the docks gives Arnie the chance to wield the big guns for himself. Two of them actually. But aside from these moments Eraser marks the point in Arnie’s career where the enjoyment was primarily derived from mocking his butchering of the English language. To that point this was merely an added bonus in between the action.

I wanted to like Eraser, and as a guilty 2 hour throwaway it served its purpose I guess. But after the 80s and 90s spoiled us (and Arnie) by casting him as super-soldiers, FBI/KGB agents and Terminators it just seems like after a decade of Coke you are forced to switch to Royal Cola for eternity. Sure it’s still cola, but…

Final Rating – 6.5 / 10. Need more evidence that this was the beginning of the end? Arnie’s 5 films after Eraser: Jingle all the Way, Batman & Robin, End of Days, The 6th Day and Collateral Damage. I might argue that this was his last vaguely average film if I could summon the energy.

While I try to throw a joke or two into proceedings when I can all of the opinions presented in my reviews are genuine. I don't expect that all will agree with my thoughts at all times nor would it be any fun if you did, so don't be shy in telling me where you think I went wrong... and hopefully if you think I got it right for once. Don't be shy, half the fun is in the conversation after the movie.
View all posts by OGR →
This entry was posted in Arnie Schwarzenegger, Film, Movie Reviews, The Grey Area. Bookmark the permalink.