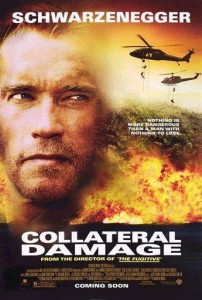 A film with Arnie and choppers…

The ‘collateral damage’ of the title refers to firefighter Gordon Bruer’s (Arnie) wife and child, who are killed in an act of terrorism by Colombian guerrilla and all around prick ‘El Lobo’ – or The Wolf.

After some grieving time Gordon decides that he disagrees with this choice of words, and he quickly becomes frustrated by inactivity and government red tape, enough in fact to do a little homework and head down to South America to track down and kill the Wolf himself.

Now a geography lesson (at least as provided by these filmmakers, I sure as hell didn’t bother looking any of this up). Colombia is a dangerous place indeed, with constant friction between the guerrilla forces and the government. The guerrillas are apparently funded by massive drug operations, operations that they protect zealously. Even learning the whereabouts of the Wolf is fraught with danger, let alone actually infiltrating deep into hostile territory and coming face to face.

But of course with a 5 minute look at google maps, a chat with a guy that vacationed there once and the purchase of a nifty hat Gordon immediately becomes one with the people of the land and a hop, step and a jump later there he is crouched outside the Wolf’s window.

To this point Collateral Damage was the usual paints by numbers stuff, not too exciting but not End of Days awful either. But by the power of Shyamalan it was apparently decreed that every film after The 6th Sense must have at least one unforseen twist, and this film has two absolute head-scratchers, twists that I won’t spoil for you here.

Twists so unlikely and inexplicable that you need a degree even to come up with such lunacy. But at the same time twists so daft that you need to have flunked kindergarten to be dumb enough to swallow them…

I repeat without the far fetched turns of events Collateral Damage was heading along nicely to ‘ho-hum that was OK’ territory, no shame there. In fact up till that point the only thing worth mentioning would have been the unfortunate soul who choked on a live snake. But once they reached for the sky – and fell flat on their face – I have no other alternative but to advise you to steer clear, despite the reasonable first half.

And by the way, Elias Koteas plays a CIA guy, and Johnny Leguizamo and Johnny Turturro both play minor roles as guys who help Gordon out along the way.

Final Rating – 5.5 / 10. Seriously, if you actually think about the chain of events required to make this shit possible it boggles the mind! The only way to enjoy this film even partially is to NOT think about it.

While I try to throw a joke or two into proceedings when I can all of the opinions presented in my reviews are genuine. I don't expect that all will agree with my thoughts at all times nor would it be any fun if you did, so don't be shy in telling me where you think I went wrong... and hopefully if you think I got it right for once. Don't be shy, half the fun is in the conversation after the movie.
View all posts by OGR →
This entry was posted in Arnie Schwarzenegger, Crappy Movies, Film, Movie Reviews. Bookmark the permalink.