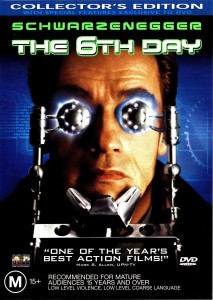 It is the future, and actually a well realised one, with several creative touches that have this film on par – at least stylistically – with Total Recall.

Adam (Arnold Schwarzenegger) is a helicopter pilot for a charter firm specialising in extreme sports type people to otherwise inaccessible locations. His partner is Hank, and together they are trialling remote controlled helicopters that can be ‘piloted’ from outside the chopper.

Aside from his mastery of this amazing technology , Adam considers himself an old school guy in a new school world.

An example of the new school trying to force itself upon the world comes with the news that cloning technology has taken off in a big way, as far as the cloning of a human being – though as the film refers to often the results weren’t too crash hot. Of course such a controversial development isn’t universally accepted, and the public backlash has resulted in ‘the 6th day’ rule, which despite being the title of the damn film I can’t recall hearing what it meant other than human cloning is illegal.

Of course that doesn’t mean it doesn’t happen. I mean speeding is illegal…

So after Adam and Hank pull an innocent switcheroo on clients, with Hank stepping for Adam so that he can get home for his birthday, Adam arrives to find his wife by HIS side blowing his… Candles. This is an understandable surprise to Adam, seeing as he hasn’t seen himself in two places at once before.

Someone is playing funny buggers, and Adam is determined to find out who and why by the end of the movie. Even more determined once he finds out that only one Adam can be allowed at any one time, and if the family discover the ruse they will be x’d out too.

For a helicopter pilot Adam embraces the deadly arts and concept of killing quickly and readily. In fact his first kill – running over a prone man on the road – is met with a ‘yeah’ of delight from this family man. The impact is dulled just a little by the fact that for the most part it is clones on Adam’s tail, but he didn’t know that at the time.

As Adam progresses inexorably toward the truth he encounters leading scientist Dr Weir (Robert Duvall) and the man responsible behind the waves of clones pursuing him in Robert Marshall (Michael Rooker).

As far as sci-fi action flicks go the emphasis on this film was clearly the sci-fi elements. The new improved Earth looks a lot like the one we live in today, but the little touches and developments make it clearly a step more advanced when it comes to gadgets, some of which look quite useful. Unfortunately this means that while the production is good the action is sub-par. A little True Lies type stuff would have assisted this film no end, as it is I can’t recall any sequences that made me sit up and take notice. Even the trademark pithy Arnold death quips are in scarce supply.

The 6th Day is thankfully not an End of Days level disappointment, but with the sci-fi backdrop and the presence of Arnie it would have been a lot better in the hands of a more skilled director.

Final Rating – 6 / 10. Someone package this with Demolition Man in a two pack DVD entitled ‘Arnie & Sly’s offcuts’ stat! I demand it.

While I try to throw a joke or two into proceedings when I can all of the opinions presented in my reviews are genuine. I don't expect that all will agree with my thoughts at all times nor would it be any fun if you did, so don't be shy in telling me where you think I went wrong... and hopefully if you think I got it right for once. Don't be shy, half the fun is in the conversation after the movie.
View all posts by OGR →
This entry was posted in Arnie Schwarzenegger, Film, Movie Reviews, Superstars, The Grey Area. Bookmark the permalink.