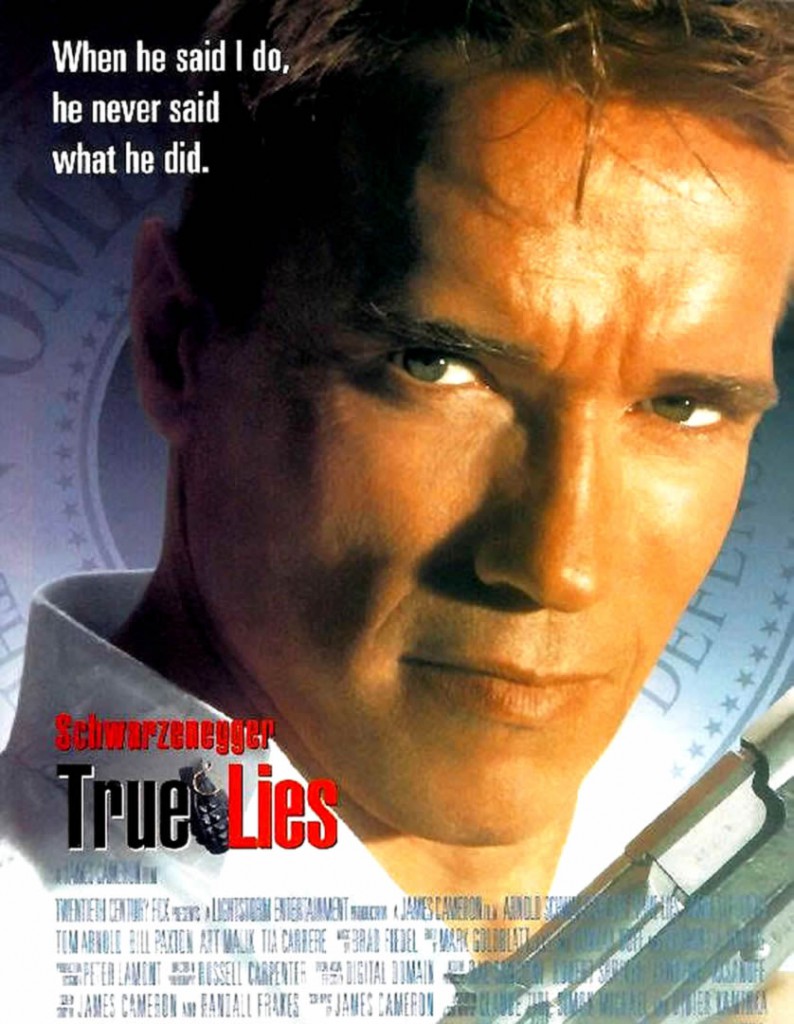 If this is your 3rd best film you’re doing alright!

James Cameron was running so hot as a director between 1984 and 1994 that True Lies is probably the least discussed film that he released over the decade, even the ambitious yet flawed The Abyss gets more love.

And True Lies is a masterclass in superior action comedy filmmaking.

Frequent Cameron collaborator Arnold Schwarzenegger is Harry Tasker, a superspy secret agent, and expert operative versed in many languages – so he can give you a death quip in your own tongue as he breaks you in half.

His wife Helen (Jamie Lee Curtis) thinks Harry is a computer salesman who is a little too excited about his mundane role, she is a legal secretary bored with hers, while teenage daughter Dana (a young Eliza Dushku) runs amok.

Harry’s partner is Albert Gibson (Tom Arnold) and the two share an easy chemistry, ribbing each other throughout the film but meshing well when required, which isn’t too often in a film that doesn’t even take the near death stuff too seriously.

Harry and Albert discover what they think is a terrorist plot to be carried out by the Crimson Jihad from a middle Eastern country never specified. Their Boss (Charlton Heston in a cameo) tells them to get on it. The team realise that their ‘in’ is Juno Skinner (Tia Carrerre) a beautiful professional trader in ancient relics who they think is somehow involved. The operation is run with split second timing and great care, with huge resources at their disposal to be utilised to investigate the most minor detail and to cover their tracks.

The investigation is halted momentarily however… for lunch. Harry visits Helen at her work and unexpectedly overhears what initially seems a fiendishly dangerous effort but turns out to be the work of a desperate used car salesman named Simon (Bill Paxton) just trying to get laid.

Against all Albert’s better judgment (the man married Roseanne Barr – whoever accused him of better judgment?) Harry moves all resources onto teaching this slimy guy a lesson. The unexpected upshot of all this is that Harry finally realises that Helen is simply bored with her life and wants some excitement… so again on the government coin he organises a simple mission for Helen – without letting her know who is behind it – and in a very funny scene Helen loosens up her inner stripper and puts on a show for him, though she thinks it is for a CIA target.

As things tend to do in the movies terrorists unexpectedly show up – the very ones Harry and co are hunting down – and abduct Harry and Helen. Within hours both of them are on an island off the US coast, with Helen blissfully unaware of Harry’s true credentials she pleads with the bad guys to let him go, informing him that she is in fact the spy… but eventually Harry let’s on and things speed up even more.

True Lies is excellent, it is basically four or five action comedy setpieces leading up to a finale that is very bit of an hour or so, but it never drags or feels bored. 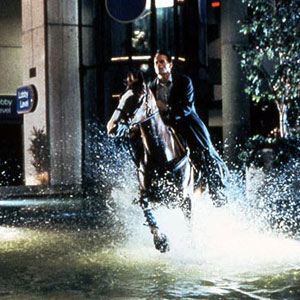 All in a day’s work…

In a film of many highlights it is hard to pick just one, I’ll go for the horse and motorbike chase through hotel lobbies, elevators and rooftops, but in reality there are many classic sequences in this film.

As Harry and Helen (well mainly Harry) team up to save millions from the terrorist attack the body count and property damage bill escalates rapidly, but even though True Lies is violent and bad guys die in various ways, it doesn’t come off as that bad. The victims are usually faceless minions in any case and there are always many more coming to take their place, and the real bad guys die in deserved but often morbidly amusing ways.

James Cameron obviously had fun making the film, Arnie showed a flair for comedy and Tom Arnold has never been funnier (if he was ever funny – I can’t recall another movie he has appeared in). In a film with a body count in three figures it might be hard to label it lightweight but I feel that this is, at the very least it was more light and commercial than anything Cameron had put out to that stage… Then came Titanic and Avatar #s 1 and 2 in the all time box office stakes.

After T2 when John Connor swore the Terminator (THE TERMINATOR! It’s in the title!) off killing I feel Cameron too readily embraced the concept, at least with realistic depictions of violent action, and while I’d rather he went back to making Terminator 2s and Aliens’s I’d be almost as happy if he busted out a True Lies every year or two for the next decade – even if it cost us another look at 9 foot tall blue hippies.

Final Rating – 9.5 / 10. It’s not Aliens or T2, but it isn’t too far below either, True Lies has almost as much action and it’s funnier than both put together. Highly recommended.