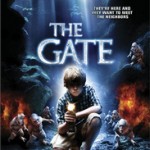 I remember seeing The Gate VHS in the late 80s or very early 90s at my local video shop and thinking how scary it must have been. I never actually watched the film back then because I still thought horror would be horrifying, instead of generally good fun. The Gate stood out in particular because it had one of those big puffy covers, but it was also one of those holographic ones which changes colour and picture depending on the angle. Big deal you might say but this was a pretty cool marketing ploy back then, in fact I also remember The Wraith did the same thing, and having a cover with a bit of the picture jutting over the edge of the box almost guaranteed a second glance.

Anyway as mentioned I never watched The Gate back then, and I only checked it out now due to it being on the cult film rack, and now that I have seen it I can’t see exactly why this was deemed “cult”. The Gate is actually pretty good competent escapist fare, like The Goonies but with a few more scares, or probably much like House or The Blob. It would have been perfect viewing for a teen slumber party back then, not too scary but some good jolts and a few laughs. Best of all this is one of the old school scaries like Fright Night that knew a good scare followed by a good chuckle is enough to amuse, you don’t necessarily NEED buckets of gore or hard core violence to entertain, (got that ELI?)

To summarise The Gate is pretty easy, a couple of pre-teens inadvertantly open the gates of hell in their backyard while their parents are away and they, and an older sister must deal with both the inhabitants of hell and the problem of how they might re-shut the passage to pure evil. There, told you it was easy.

The Gate stars a scarily young Steven Dorff (of Blade fame) as Glen, his mate is Terry, a heavy metal loving skinny doofus, and his older sister is Alexandra (Alex). They are left alone when Glen and Alex’s parents make the mind-blowing decision to leave them alone for the weekend with Alex (15!) in charge. So the parents leave and the kids immediately throw a party, now being the 80s it involves scrunchies, blindingly bright leggings, crimped hair and frizzy (There’s Something About Mary) gelled fringes that should have scaffolding.

Meanwhile…. In the backyard the gate to hell has inconveniently opened up, allowing the beings within to go for a wander and check out the sights. At this point I will repeat that despite the subject matter this is pretty lightweight stuff, and while there are some gory bits they are mostly for comic effect and are over quickly.

There are some cool hallucination scenes involving family members and pets, a pretty cool “Frighteners” style bumpy-walls effect, and when we finally see the grooblers they are acceptable for an 80s movie, given the FX available at the time, (this is a long way from T2 folks).

– Babysitting sisters won’t let you call your parents when you’re upset, even if the gates of hell are opened and you are attacked by monsters from another dimension!
– Insects are creep in close up.
– Everything that you think about heavy metal music is true, it is the cause and solution to most dealings with demons and hell. (I knew it!)
– When you are first told that the very gates of Hell are open and Demons have entered our dimension it is polite to respond “Demons! What kind?”
– Stop motion FX gets the point across and you can still make a good movie even if the FX aren’t as smooth or big as a Decepticon.
– Even if you are beset by Demons there is still time to tease others for being afraid.
– Kids should not expect help from anyone when battling Demons. Even if their house is surrounded by giant smoke billowing “Twister” style into the sky neighbours won’t notice.

As soon as you realise that The Gate is an 80s FX driven movie, made when FX just weren’t that advanced, and set your expectations accordingly you might be pleasantly surprised. In fact an 80’s marathon of The Blob, The Thing, The Gate and Fright Night wouldn’t be a bad night or weekend. This is a well made film that aims to entertain rather than just gross out, nothing is too cheesy, gory or dumb and I finished the movie happy that I watched it, even if the DVD didn’t have a cool reflective cover.

One last thought – I did notice a lot of similarities to scenes and ideas that were in Army of Darkness, knowing that this came out a few years before AoD does this mean Mr Raimi ripped off an 80’s kid’s horror movie? Watch it and see for yourself Deadites.

Final Rating – 7 / 10. Not “too” anything. Just a well made and generally fun movie. I won’t call it a “Horror” movie, how about a good old fashioned “Scary” flick.