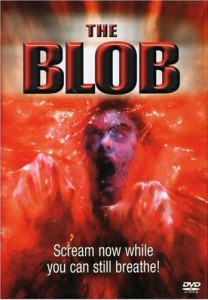 Here is the classic example of a film taking the most basic of formula but doing it so well that it creates a minor classic. Aside from a catchy alluring title The Blob is merely a device that justifies some quality old school gore SFX while the yet to be devoured spit pithy quips around

In this “all the way 80s” horror film replete with mullets Kevin Dillon and Shawnee Smith (just how old are they both?) shout and scream when the situation demands – and run from miniature effects when necessary once a mysterious creature falls from the sky in immortal horror movie fashion.

Kevin is the young (mulletted) rebel, Shawnee the high school cheerleader who should never EVER fall for the young rebel – should she?

Brian (Kev) spends each day smokin’, ridin’ and not carin’…

The threat is a small gelatinous blob (thanks Wayne’s World… and GTA 3!) that ingests all living tissue that it encounters, absorbing them into an ever-growing – but still blob-ish hungry organism intent on eating new friends and ingesting people.

Highlights include a scene in the movie theatre where the lobby comes to the film for some snacks… and the subsequent chase into the water system. 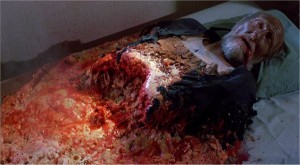 “Told you to stop drinking Coke!”

The gore effects are simply excellent and prove once and for all that CGI can amplify and intensify – but should never be used as a crutch – yes The Wolfman I’m looking straight at you again.

The Blob in itself when seen is hardly menacing or scary, but the mere suggestion of being slug-food is revolting, especially when backed up by scenes showing just that where characters are absorbed and basically melted. The Blob takes this suggestion and turns it up to 11, it is an often overlooked 80s film that deserves more attention and admiration.

Final Rating – 7.5 / 10. Definitely hedging more on the “comedy” side of horror-comedy, The Blob nonetheless deserves more prominence in the genre’s discussion. It is funny, smart and inoffensively disgusting.