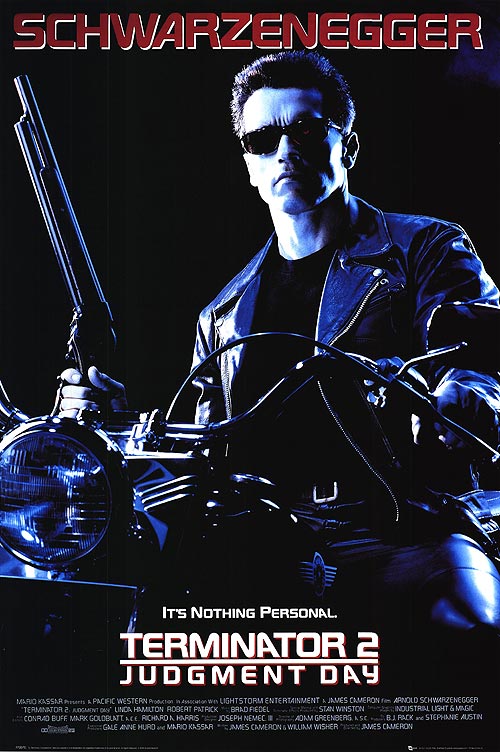 How to review T2: Judgment Day without resorting to fanboy-isms? It’ll be difficult… because this roolz!

We know from the 1984 Terminator that the future turns extremely bleak – in 1997 to be specific (did I miss something?) – the robots that had become self aware and decided “what the hey let’s rule this sucker” and immediately set to eradicating all of human kind from existence…

But who did they call for tech support? Did they leave India alone?

In any case the robots came up against some daring and resourceful rebels who made things very difficult, these guys were called Wolverines… no wait they weren’t.

The machines worked a way to send an assassin back in time to kill Sarah Connor (Linda Hamilton) the mother of the leader of the resistance, a guy named John Connor. However, in a stroke of luck for the film the resistance managed to send one lone soldier, Kyle Reese back to protect Sarah and thwart the plan.

Cue action and one of the best films of the 80s.

In T2 the machines have given up on Sarah and are focussed on a teenage John Connor (Edward Furlong) before he grows up and gets all tough and surly like, once again both the machines and the humans manage just one time traveller to head back to battle.

You could argue that replicating the plot of the first is a bit lazy but I’ll excuse almost anything that results in the awesomeness that follows… *Pushing the fanboy deep down into the recesses*… moving on.

In the years that have elapsed technology has advanced dramatically, where the original T101 was slow and deliberate and susceptible to huge explosionsthe new assassin sent, the T1000 (Robert Patrick) is incredible. 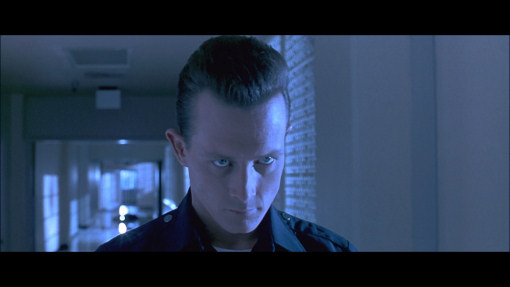 Made of liquid metal it can convert itself or various body parts into any solid object it pleases, it can replicate people that it comes into contact with or just turn an arm into a sword and chop off their heads. It can move with greater speed than the T101 and being flexible can be far lower key when moving through society than the 6’ 5” leather clad behemoth hulking through Los Angeles leaving a swathe of destruction behind him.

All in all a far more efficient, normal looking and therefore suitable killing machine on all fronts – the right tool for the job than the T101. 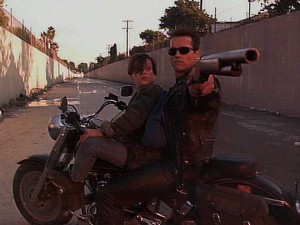 If this guy offers you lollies I advise you to take ’em.

Now who did the resistance manage to sneak through time… oh the T101 (Arnold Schwarzenegger) you say… well this is awkward. (At least his opening appearance means that the song Bad to the Bone can never be used again in a film.) 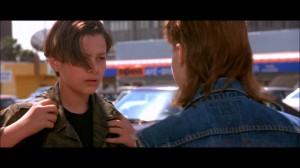 John Connor: If you can look past the red mullet!

After contact is made with young tearaway John Connor and his fugly red mullet-sporting amigo the film is basically one chase after another from then on – but the best one of all time.

When the two terminators meet there is a fight that shows just how durable and tough each machine is, it also contained the first of many “No f-ing way!” moments (in 1992 at least). It is followed immediately by a motorbike / truck chase that may never be topped.

A digression: The best 2 bits of T3 were a great vehicle chase and the terminator fight – at least they got that right. 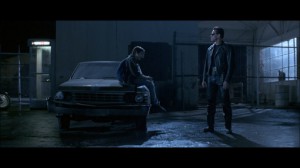 When John realises he has the power to order the Terminator around he immediately tells him “no more killing of humans”. While it didn’t harm the effectiveness of this film it is a shame that director James Cameron has continued down “the less violence is more” path.

First mission post escape is to free John’s mum Sarah from an asylum where she has been held and mistreated since the initial events, who would have thought telling the truth about a cyborg killer from the future would end you in the nuthouse? Not knowing any better John has also been raised to believe she is 100% loony as well – I guess that means Mum’s getting a pretty big make-up pressie this Christmas then?

The break out is another classic scene and involves 2 more jaw-droppers from the T1000 who shows up on the trail.

Now again temporarily free, the new odd dysfunctional family ponder their options, Sarah tells them of people she trusts in the South so initially they head South away from the initial blast zone that will indicate the start of Judgment Day and the onset of the machino-humano conflict.

Having known the cold hard truth for almost a decade Sarah is better prepared for what the future might hold and more willing to do whatever is necessary regardless of the cost or moral implications. 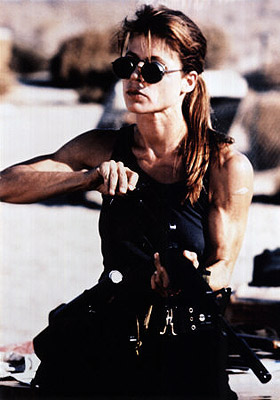 She decides that the scientist who creates the self aware robots, Miles Dyson, must die. Her logic suggests that preventing the breakthrough should prevent the ensuing war. The Terminator feels that his mission to protect John is compromised by this human logic and protests, until ordered otherwise.

Back to LA, where the meeting with Dyson and trip to his company Cyberdyne Systems triggers the finale… no rest from now on.

While the final sequences involve still more amazing chase sequences and a classic cat and mouse game in yet another factory I can’t describe more.

I can urge you to watch this film immediately if you haven’t seen it before – and if you are over 15 (it is pretty violent). Forget Avatar. Fuck Titanic. Terminator 2: Judgement Day is still James Cameron’s crowing achievement… and that’s with the original Terminator and Aliens, shit even Piranha 2: The Spawning being considered.

Arnie was in the final stages of his shirtless action superstar prime, Hamilton herself was 50kg of determined wiry muscle and Eddie Furlong was OK as young John Connor, even if some of his dialogue is a little stilted and his post T2 career has hardly thrived.

Robert Patrick is fine as the emotionless and purposeful killing machine sent to kill Connor, and there are several bit parts filled by Cameron regulars that are all effective, not least of which is Joe Morton as Miles Dyson – who at least gets a pretty major exit. 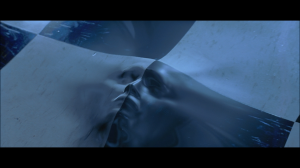 20 years ago this was The Shit!

Aside from all that it was the FX at the time that set this film apart, the T1000 in all of its teenage Chinese gymnast glory is amazing still nearly two decades on, his reconstitution scenes and dogged determination are still incredibly impressive even against the everpresent greenscreen and CGI world of cinema in which we live.

Further to that though are the supposedly minor touches that round out the film and add to the WOW factor, as an example in the asylum escape within 3 minutes there are 3 clever moments that impress:

–        Sarah fills a syringe with cleaning chemicals and sticks it in the neck of a hostage.

–        After her escape and with pursuers on her tail Sarah breaks off the key in the lock, stymying those chasing.

–        The T1000 breaks into the lift by converting his hands into levers to prise open the closed elevator doors.

That’s just three examples in one short span of time, these touches proliferate through the film (who hasn’t wanted to reload a shotgun with one hand like Arnie does in the first chase?).

Terminator 2 is another example of a perfectionist in his creative prime once again setting the bar so high that others have realistically been yet to surpass his feats. It’s worth noting that while Cameron has Titanic and Avatar to his credit since T2 it is the decade from 1984 through 94 when he was at his best: The Terminator, Aliens, T2 and True Lies would instantly be the best DVD single director box-set in any action fans collection – and T2 MUST be the centrepiece in the set.

When sci-fi actioners are spoken of, this will be in the discussion for as long as films are discussed.