Terminator 3: Rise of the Machines (Review) 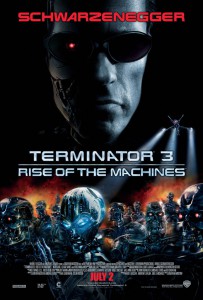 Yes California – Your Governor will crush you.

Say what you want about Arnold Schwarzenegger – he’s a politician so most people do – but the man practically invented the buff indestructible killing machine with biceps of steel and post death quips of cheese. A genre that has had several pretenders to the throne come and vanish with barely a ripple at the box-office before and since.

Put another way, the 80s and 90s decade had “I have no idea how many thousands” of films churned out, there are maybe 50 that still hold up to close scrutiny. Think of the first ten or a dozen that you can come up with and I guarantee a couple of them will be Arnie’s.

Now is it a fluke that Arnie appeared in arguably half a dozen of the best action flicks in a decade? Aside from Sly Stallone no-one else came close to matching his domination, and even Sly relied largely on 2 franchises for his success.

Was Arnie simply handed all the best roles? Was he given a free ride? Was he unbelievably lucky?

Or is he actually a credible leading man and commanding screen presence?

I think the answer for me came when I watched T3 last week. About half way through I realised what a dud movie this was in almost every sans-Arnie scene. His Terminator arrives maybe a third of the way in, and as a one guy audience the only thing that allows you to remain involved is knowing he’s coming, when he departs proceedings it’s 100% dullsville from there.

Like many inferior sequels the film opens with a brief narration that serves as a recap for any action fan living under a rock for 20 years – in the future robots send back a cyborg assassin to kill a boy / young man named John Connor destined to become the fearless leader of humankind hellbent on fighting the robot occupation… repeatedly.

The rest is a carbon copy of T2 really, only 10 years on. Nick Stahl as John Connor is serviceable but he either did the steely-determined thing very well or he simply lacks personality, his future love interest Kathryn is played by the huge-eyed Claire Danes, the psychiatrist is back once again to continue his running joke – but aside from all that it is Arnie standing in front of a relentless killing machine for 2 hours.

That isn’t to say that the film is without merit, it tackles the responsibility of copying a classic very seriously, but when you are taking on one of the best 4 or 5 films in history that’s a pretty tall order.

So after Kristina Lokken appears – naked – as the female Terminator (needless to say if she remained naked they would have sold millions more DVDs, she is a well built cyborg) she instantly sets about killing off various members of the resistance, who are all in their teens or early 20s at this stage. Lokken’s Terminator is again liquid metal but this time can produce a veritable handyman’s arsenal of tools and weapons, including a big fuck-you cannon from her arm.

Arnold arrives in the desert a short while later, and the two set about punching and shooting at each other all over the very state that Arnold would eventually lead.

I must admit that the first big chase is worthy of direct comparison with almost anything from T2, there are remote controlled cop cars, ambulances, a big mobile crane – which Arnold spends a great deal of time hanging off – and even a fire engine. It is a three year old boy’s toyset on the bigscreen (my 3 year old actually does plays with all those things). The scene itself runs for maybe 10 minutes, it has the requisite “big” explosions and collisions, showcases the new lady-Terminator’s abilities and Arnie’s dogged determination, and best of all it all seems quite dangerous. Too often now chase scenes are just the lazy action-filler in films, there is little in the way of adrenaline or the perception of peril, the fact that this scene was so outstanding perhaps makes the rest of the film look a little shabbier by comparison.

After a couple more not quite so good chases and a shootout in a cemetery (which fell a little flat), John and Kathryn are told that Arnie must protect them so that they and their children will fight the machines later on. Seeing as how they only met each other a few hours previous, and that Kathryn up until that morning had a fiancé you could safely call that an icebreaker. Talk about arranged marriage; this is arranged kids!

With Judgment Day inevitable and looming large it was a little disappointing to find the finale a little underwhelming, perhaps too clinical and formulaic, which seems obvious given I have already pointed this out as a replica of T2.

Arnold and Lady-T go roboto-a-roboto and cause millions of dollars in property damage, and all the while John Connor and Kathryn seem to stay just far enough and just close enough to danger. 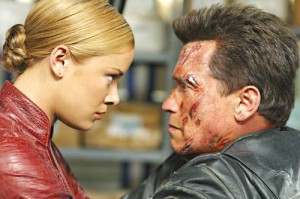 Definitely improved the aesthetics in the new model.

The lady-Terminator seemed deadly but a little dumb, many times she had a target in her vice like grip and instead of squeezing them to death, snapping their bones like crackers or just pummelling them into oblivion she repeatedly threw them away.

I guess even robots should learn not to send a woman to do a man’s job.

I firmly believe that there is another “Great” Terminator film to be made – last year’s effort was OK but hardly a classic. More than anything this frankly mediocre effort showed just how much the franchise relied on Arnie to flourish, when a 60 year old man playing a giant killer robot is far and away the best thing going for your film it highlights how pivotal Arnie really is, finding his effective replacement might be near impossible, but it doesn’t mean they shouldn’t try.

Final Rating – 7 / 10. The non-Arnie scenes are a total drag. As a film this is really a 6.5, but that one mega-chase elevates this up a notch. The film might not be required viewing, but that scene sure is.

While I try to throw a joke or two into proceedings when I can all of the opinions presented in my reviews are genuine. I don't expect that all will agree with my thoughts at all times nor would it be any fun if you did, so don't be shy in telling me where you think I went wrong... and hopefully if you think I got it right for once. Don't be shy, half the fun is in the conversation after the movie.
View all posts by OGR →
This entry was posted in Arnie Schwarzenegger, Film, Movie Reviews, Worthwhile Movies. Bookmark the permalink.