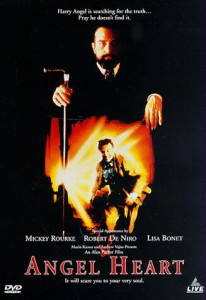 Did De Niro eat Mickey or is he just sitting on him? I’m confused…

For two decades I walked past various copies of Angel Heart in various incarnations (VHS / Laserdisc / DVD) in various stores.

No idea why, the cover just didn’t do it for me. Now some 20 years after the initial release I am pleased to jump on the bandwagon. Am I a bit late??

Angel Heart is more than the flick in which a Cosby kid got her kit off – but it is indeed that – it is a period drama which on paper has every chance of moving into hokey territory, but with some skillful handling and a gradual build in momentum manages to emerge as a very strong thriller with supernatural elements and a pretty solid twist.

It is 1955, a decade along from WW2 and Harry Angel (Mickey Rourke) is a small time Private Investigator. Early in the film he is solicited by a mysterious man through his lawyer to perform something of a missing person search. The mysterious man is Louis Cypher (Robert De Niro in a solid cameo) and the man he is to find was a popular African American singer named Johnny Favorite who had a minor pre-war hit before himself heading off to war.

Cypher alleges that Johnny and he had a contract that was broken, and that Favorite still owes him. It is not for Angel to collect the debt, merely to see if Favorite is actually even alive so that Cypher can make his request formally… And off Angel goes on the manhunt.

After some early setbacks which see Angel put in minor peril he decides that this gig might be out of his league and heads to Cypher to make this clear. While Cypher explains to Angel just how badly he wants Favorite located – by increasing Angel’s fee dramatically – he somehow manages to make the simple and banal task of eating a hard boiled egg infinitely more menacing than I remembered it being as a kid.

Angel – now back on the case – follows the trail of clues to N’Awlins. Without going into the developments and twists in the case it is fair to say that the situation unwinds slowly in languid fashion, and we learn at the same gradual pace that Angel learns exactly who is involved and what is actually going on.

Eventually Angel tracks down Favorite’s former squeeze, who is already deceased but has left a young daughter named Epiphany (Lisa Bonet) who is maybe 18ish. Epiphany is smart and seems to know more than she lets on – she is also effortlessly hot – and Angel gets the itchin’ for another “chat”. Before he gets the chance to do that though he tails a blues singer who also seems to know more than he is telling, and watches as bluesman, Epiphany and a gaggle of scantily clad “others” perform an elaborate and frenetic voodoo ceremony complete with the sacrifice of a chicken.

It’s always the crazy hot ones who are into the voodoo.

Now Angel realizes that there might be very good reasons as to why no-one seems to want him to know the truth.

People who meet with Angel as he goes about his investigation have a habit of winding up dead, though there isn’t much onscreen violence or gore,  it seems that almost everyone involved at any level doesn’t want the truth to come out. Angel himself gets warned off verbally and physically, he makes discoveries of his own and even manages to have himself an Epiphany at one point – the capital letter is not a mistake.

On we go to the ultimate unveiling of the “big picture”, with information and new facts coming thick and fast as the story moves faster and faster, involving more bizarre developments and situations. This all culminates in a quite satisfying payoff to end proceedings with Cypher arriving again and hoping to collect.

This was the 80s before Mickey Rourke rode motorbikes too fast and before he got hit by both boxers, the bottle and the scalpel so hard that he started fondling panicky starlets in public. He is just the right mix of cocky, confident and resourceful here to believe what is going on and to see exactly why it was Angel that was set on the case in the first place.

De Niro plays Cypher straight and understated, and obviously relishes the menacing dialogue and creepiness that his character exudes in his brief dealings, and Bonet is young and definitely hot enough, but she also manages to be very credible in her role.

All in all Angel Heart is a very effective period thriller, it  moves along at a slow pace and might prove a little slow and dated for some, but it maintains interest as Angel (and the audience) moves closer to the truth and boasts some solid performances from actors who could have let this all go extremely cheesy.

Final Rating – 8 / 10. It could me 20 years to find this under-appreciated gem, you’d be doing yourself a favour if you looked it up sooner rather than later. (And you get to see some Cosby-cans!)

P.S. I’m calling it a horror film but I’m not really sure it is, it’s worthwhile in any case.