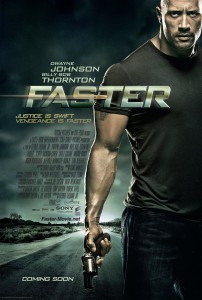 I’m so Laaaaaarge I don’t fit on the poster.

I have no idea of the facts, but if Faster isn’t based upon a comic book then perhaps this might be an ideal role reversal, a film to comic book adaptation.

Dwayne Johnson – The Rock for the low IQ seats – is Driver. Yep, that’s his name apparently. Upon release from a long spell in prison he is immediately off looking intense, purposeful and… driven?

Thankfully after many years his classic muscle car is right where he left it within walking distance of the prison, still looking immaculate under a dust cover… with the keys still resting on the wheel where he left them!!!

After all those years the battery fires first time and off Driver goes, on whatever mission that we are yet to fully understand.

Step 1 though involves him walking into an office building and pumping a few rounds into an employee without a word.

Meanwhile Billy Bob Thornton plays Cop – again his given name apparently. Cop is also a junkie whose addiction has cost him his marriage, he has 10 days to retirement (I wonder if that bodes well for him) yet he still picks up the Driver case, much to the chagrin of the assigned detective played by Carla Gugino – who probably has a name but I might call her Eye Candy.

Our third member of this simply monikored triumvirate is Killer, a young, fit, finely tuned British “doer”. Killer declares he has “beaten” yoga – does he get a coloured belt or something? Shouldn’t he pass an assessment? Does this make him Buddha?, and he is now bored and looking for a new challenge.

Nothing really to do with the story but Killer has an insanely hot missus who supports his career, but at the same time wants him to stop. Now Driver is a driver, Cop is a cop so I’ll let you solve the intricate riddle that is Killer’s career.

So our three non-amigos all go about foiling the others. 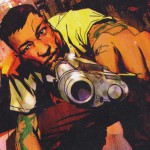 Driver has his own Santa list – on which all the kids were very bad. 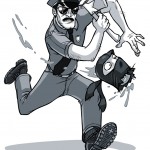 Cop has one last job to complete before he retires. (Gugino is there to talk about the plot, someone has to!) 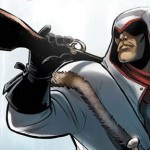 Killer sees Driver as his ultimate challenge before he gets out of the biz – probably to master Tantric sex with the hot blonde.

Faster has minimal dialogue, broad characters who only seem to possess a few qualities and adhere to them rigidly, and lotsa pretty backdrops. This would all work so much better as a cartoon, there wouldn’t be too many speech bubbles clogging the panels, the colours would all look nice and every now and then the artist could put those cool shooting pictures in with flames coming from the gun barrels and spent rounds hanging in mid-air.

I wanted to like this in a deliberately cheesy Crank or Shoot ‘Em Up way, but it is really only OK. There isn’t too much action for an action film – I kinda thought that this would be Johnson’s unveiling as this decade’s Arnie… 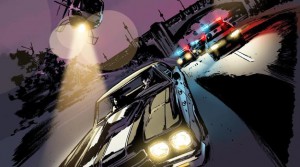 Didn’t happen, which is a pity because if he swallowed his pride and embraced the role there would be no better nomination for Arnie status than The Rock, who better than the heavily muscled eyebrow raising tough WWE vet to be a real life cartoon character?

One last question: Is anyone dumber than movie cops (if they aren’t on the poster)? A known criminal who looks like The Rock walks around calmly killing people for 2 full days, is caught clear as day on camera in the first instance – and they have no clues??