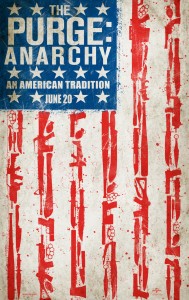 At some point during The Purge 2 you’ll experience strong deju vu. You’ll wonder just where you saw it before, and why you would ever bother watching it again. Then you’ll realise that this is a first time viewing and realise just how bland and derivative it all is.

It is Purge eve, the night of the perfectly legal mass slaughter purposefully sanctioned to rid the streets of scum and give the less law abiding a release of sorts. The night where a colleague saying ‘Might see you tomorrow’ sounds far more ominous and depressing.

This is not the night to sit on the porch, or take the dog for a walk, or to shoo the kids off the lawn, especially the kids with face masks, brass knuckles and the occasional flamethrower.

Before you wonder why the cops don’t use the chance to rid themselves of the kingpins, the scumbags, the unsavoury types and such, let’s move on.

This is not a movie for thinkers, it’s a movie to justify unnecessary ultra-violence, and it doesn’t even get that right.

Within hours of the sirens that trumpet ‘purge on’, several innocents and unfortunate find themselves running the streets as all around turns to violent shit. You’d feel sorry for them if they weren’t such morons, I mean you’ve had 364 days to check the locks and get where you need to be, why complain when the last minute plan fails? This is not last minute Christmas Eve shopping where the only thing at risk is your family’s love, this is high stakes damnit!

In any case these defenceless lambs attract more of the same, and ultimately find their shepherd in the form of a reluctant loner who only wants to help himself. And from there it’s the exact same film as the first one, only this one from an outdoor perspective and a Taken like ‘we wealthy types like to order our Purge in’ subplot that seems tacked on for still more shock value.

Like so many other crap films the make up and costumes are the most effective elements. A striking image can do more marketing than a thousand soundbites will. They could make The Purge 3 tomorrow (and they likely will) for $57 and it would make a profit.

It wouldn’t make a good film, but it would make a profit. For some reason the theme of society embracing violence is intriguing to some; The Running Man, Battle Royale, The Hunger Games et al, although in reality you could go all the way back to Gladiator.

The Purge 2 is cheap, lazy and fumbles its way across the screen like a drunk after five beers too many. This is the kind of film John Carpenter would crap out in the 80s, hell even John Carpenter of today could make something like this – and he made Ghosts of Mars!

Final Rating – 5 / 10. Might I suggest a once a year purge of bad films, where excretions like this are beaten to a pulp and left for dead while the authorities whistle? That’s a concept I can get behind.