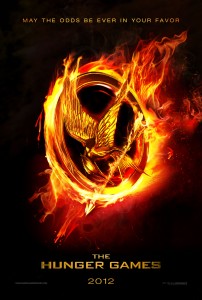 I openly detest Twilight but I’m meant to. It takes only a little common sense to realise that I am not the appropriate gender, age bracket and (hopefully) maturity level for the material.

Ditto Harry Potter, which I haven’t even bothered checking our yet, but with a soon to be 6 year old will no doubt eventually.

So I was intrigued when news of a new, serious, credible teen-friendly franchise was coming. Not enough to bother with it in cinemas, but now it is on DVD…

… and let me just say, if you want your franchises to be ‘competent’, then go right ahead, because The Hunger Games isn’t enough of anything to warrant any other description.

Set in post-apocalyptic times *where else?*, the story revolves around a Highlander ‘There can be only One’ style tournament between randomly selected 12 – 18 year olds from the various regions. The annual event is televised and hyped Big Brother style, complete with stylists, mentors (coaches) and of course publicists, with a TV host (Stanley Tucci) giving blow by blow commentary and chatting to the various participants in ‘full access’ interviews.

The film has none of the faux-emotion of that most bloodless of vampire/werewolf series, indeed some of the content is quite mature and challenging, and once the actual games commence the tone remains serious and anything but tongue in cheek.

It’s just that I’ve seen it all before, often done better. The Running Man took the bloodsport contest for ratings angle and hammered it – albeit in cheesy fashion. The afore-mentioned Big Brother smoothed the edges and made the human contest as social experiment that has lowered IQs across several contests for decades.

And of course the Japanese flick Battle Royale is practically exactly the same as The Hunger Games. And somehow that was controversial and in some areas banned. How far has society regressed in a mere 12 years that this is all now fluffy fodder for teens?

Being purpose built as a Blockbuster (cash cow) Franchise The Hunger Games boasts a cast full of big names. Jennifer Lawrence headlines, though she is asked only to scale down her role in Winter’s Bone as Katniss, a humble young girl from a decidedly working class coal mining shire named District 12 (Reppin’ the D12 Yo!). She is determined, quiet and driven – just like Ree from the far more accomplished and worthwhile Winter’s Bone, which hopefully this film inspires others to check out. Katniss is a decent lead character and obviously highly identifiable with the coveted teen female (and creepy adult male) demographic, just none too original.

(I’m not sure if fellow lead participant Peeta is meant to be an unlikable douche, I can say though that this is how Josh Hutcherson chose to play him.) 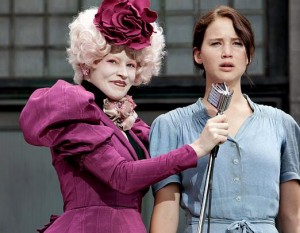 Stanley Tucci, Elizabeth Banks (in GaGa makeup and outfits, Donald Sutherland and Wes Bentley all have supporting roles but in all honesty not a lot to do – I wonder if Hunger 2: Still Hungry will call upon them more?

Even Lenny Kravitz appears as Katniss’ stylist, though ironically given both his role and Kravitz’ reputation, he is the least stylised character in the film.

The film breezes through the early going, the selection process, the training, the publicity, oddsmaking (!) and build up, so you might rightfully expect that once the ‘elimination round’ begins it will be the centrepiece of the film. And more importantly riveting viewing.

I laughed when about 20 minutes after the initial release of the ‘gamers’, Katniss felt impelled to kill, cook and eat a squirrel. By my reckoning she’d run a mile or so, which begs the question how hungry can you be after half an hour and a light run?

It got continually less interesting from here, especially given I have already seen Battle Royale…

Hopefully the inevitable sequel takes things further than this did. (And can afford better CGI than the downright crappy effects on show here; ‘Wait, that’s supposed to be a fire?’)

Look I can totally see how this could resonate with teenage girls, with themes of doubt, insecurity, rivalry, resentment, competition and peer pressure – all against a reality show backdrop, there is no doubt that this must tick many subconscious boxes for many young people. And while I’d much rather watch this a thousand times that Twilight once, in an ideal world I’d rather not watch this again.

Final Rating – 6 / 10. A teen-targeting affair lacking in OMG moments, that won’t make you LOL let alone RotFL. Which begs the inevitable question; WTF? This is just a movie, with the emphasis on just…