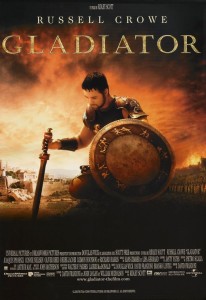 Ancient Rome stands alone. Mighty, all conquering and at the the height of her considerable powers. Decades of battles and slaughtering and invading might be looked upon negatively by the conquered and the slain, but they aren’t the guys that write the history books.

Lead by the strategy and ambition of Caesar Marcus Aurelius (Richard Harris), and the sword and inspiration of General Maximus (Rusty Crowe), the Roman army is tired, but hanging in there as the end to battle approaches.

They yearn for an end to bloodshed and a return to normalcy. Maximus holds his head high but he too wants to return home to his wife and son on his simple farm. He might even want to shave off his eternal stubble.

And just like that it is over. The last barbarian is slaughtered, the war is won, the swords are sheathed and the wine is uncorked. The soldiers celebrate and say nothing, though they do so with a glint in their eye, waiting tentatively for the order to disband and go home. That’s when the real party begins.

Maximus toes the company line, keeping his jaw set but also one foot pointed towards the exit door at all times like a dog waiting for the ok to eat the treat in front if him.

Then Caesar fucks it all up for everyone.

The ageing leader knows his time is near. He ignores Maximus impassioned plea to permit him to return to his family and asks instead that he consider stepping into his noble sandals as the new Caesar. This enrages Commodus (Joaquin Phoenix), the Just Showed Up Now That The Killing Is Over son of Marcus, who firmly believed that becoming supreme leader was his birthright. Upon finding that this is not the case and he won’t be granted the top job, Commodus simply takes it. Not cleanly.

With Dad now relegated to being the guy on coins or busts, Commodus’ first act as Caesar is to clean house. He orders the killing of Maximus, then in his signature ‘one step too far’ he doubles up by having his wife and young son offed as well. His men finish two thirds of the job, unfortunately the one third they mess up is Maximus.

Now presumed dead and with his family gone, Maximus hardly feels like the lucky one, a viewpoint that is strengthened when his broken body is taken and forced to train, fight – and most likely die – as a gladiator by the opportunistic and callous Proximo (Oliver Reed).

Meanwhile back in Rome, Commodus has seamlessly taken to the Caesarship, with times tough and the locals restless, he buys the love of the people by hosting grand and bloody gladiator fights, with thousands showing up for the spectacle.

See where this is going?

Russell Crowe keeps a square jaw and a dead eye as the determined Maximus, a broken man fuelled only by vengeance. Phoenix chews scenery as the unpredictable and volatile Commodus, whose ambition often exceeds his abilities, and Connie Nielsen appears as Lucilla, Commodus’ sister, an unnecessary character who is nonetheless a lynchpin to several subplots – incest, romance, a threat to a small child, all of which seem superfluous.

The fights are elaborate and bloody. The sets luxurious and authentic, and the computer generated ancient Rome is awe inspiring. Yep, Gladiator sure looks a million dollars. Even in the scenes set in the mud and blood, it looks like it’s expensive dirt, not just any old run of the mill killing ground.

But like Heat and The Matrix before it, Gladiator is expertly realised and often gripping entertainment, but it feels a little hollow, a little fabricated, lacking in some small but vital way.

And like those other films just mentioned, I just don’t see greatness.

Final Rating – 7.5 / 10. I know that many people – ok many guys – my age see this as one of the greatest films ever. For mine Gladiator is no better than the critically panned 300, and that silly film is definitely more fun.